Two things strike you as you enter the Guildhall at Portsmouth, firstly how friendly the security are  certainly the most smiley and chatty of any venue I've attended (even having just lost the day before to Chelsea in the FA Cup). Second is how hot it is inside for such a large venue, even standing around waiting for the acts to come on you're quickly covered in a fine sweat. Fortunately the bar is in a separate room so you can always escape the heat for a minute or two. 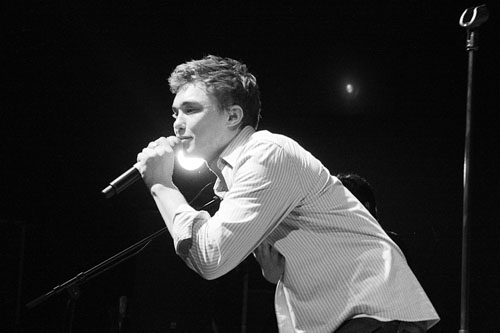 We were here tonight to see Scouting for Girls  a band who probably rank alongside Marmite for their 'love them or hate them' status. First up however was Alex Gardner, who is described by his record company as "pop's latest rising star". This may or may not be true, but he is certainly popular with the younger members of the audience who screamed and whistled their way through the set. In his favour he does have a strong voice and some good songs, however he is noticeably aware of the attraction he has, and I felt this detracted from the music, leaving a sense that he is still undecided about whether he is a serious musician or a teen pin-up. If he chooses the former, he could go far.

After a quick break to the bar to cool down and drink some water, we returned to the sweatbox to see the main act. Looking round the venue it was surprising what a wide variety of people have come to see them. Apart from the expected groups of teen girls, the audience was an even mix of ages, both male and female. As previously mentioned Scouting for Girls are a Marmite band, and to a certain extent the criticisms are true  musically the songs can sound a bit similar and the lyrics can be a bit corny. But to dismiss this band out of hand is to miss the point  they're not out to change the world with their music, merely to have a good time and entertain, and that is something they do very well indeed. From the moment they arrive on stage they are immediately engaging with the audience. Not for them is the moody introspective performances of the Indie bands about at the moment, they are here to enjoy themselves. 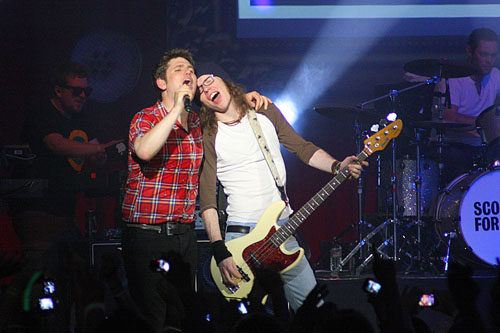 Watching a performance it's hard not to get caught up in their sense of fun. Greg Churchhouses energetic bass playing is interspersed with plenty of air punches and the kind of posturing that wouldnt look out of place at a 1980s stadium rock gig. Lead singer Roy Stride, despite being the official keyboard player, spends less than half a song playing, the rest of the time he is running back and forth across the stage interacting with the crowd, geeing everyone up - frequently holding his mic out to encourage the crowd to sing along, and even at one point running off stage and appearing up on the balcony to perform as he makes his way from one side to the other. Drummer 'Dr' Peter Ellard is probably the quietest of the bunch, but I suspect thats only because he's stuck behind the drums, as his drumming matches the energy of the other two members. The band are supported on stage by Peter Clements and Matt Simmons who provide guitar and essential keyboard support for Stride's frequent jaunts around the stage.

More hits follow in quick succession, providing an even selection of tracks from their first two albums, highlights for me were 'James Bond', 'I Need a Holiday', 'Posh Girls', '1+1' and 'Micheala Strachan'  complete with a photo montage of her career on Wacaday and Really Wild Show on the screen behind them. The band also performed a cover of Journey's 'Don't Stop Believing', although Stride had the lyrics bought out onto stage confessing "I know the lyrics to my own songs, but I can never remember anyone else's." Just to hammer the point home, and to provide the audience with another sing along, they were projected up on the screens as well. 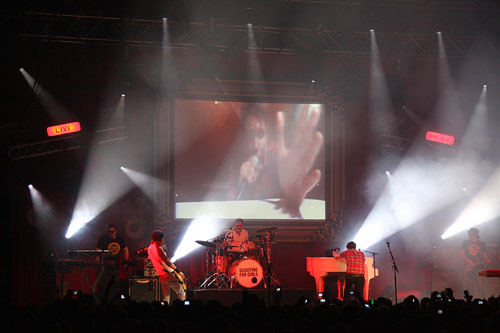 There were quieter moments in the show, notably the opening half of 'It's Not About You', which Stiles performed acoustically, which gave a hint that the band could, if they wanted, move onto the kind of anthemic sound that Coldplay have taken into stadiums around the world, but at the moment they seem happy taking their own particular brand of party on the road, and quite frankly, who can blame them? 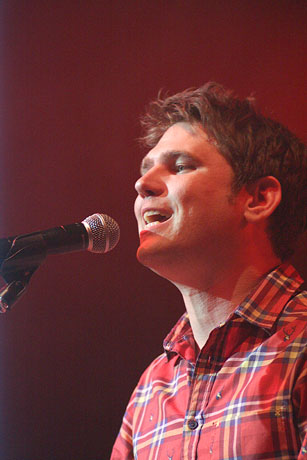