Usually, musicians start their national tours off in large cities where they can play to plenty of people and attract the media that inhabit these places to plug their tours. Jools Holland has avoided this tactic and instead headed to a small ice rink in the seaside town of Ryde on the Isle of Wight, unconventional this may be, but the Rhythm and Blues Orchestra are a pretty unconventional band in themselves.

Sited on a sunny but windy seafront the arena is geared up to its more usual job of providing a venue for the local ice hockey team. However, after laying down a floor over the ice and building a stage at one end it becomes a pretty serviceable 2000 capacity venue. Although a slightly thicker floor would be appreciated  this is probably one of the few venues where no matter how hot you get, your feet stay positively chilly if you stand still for too long. 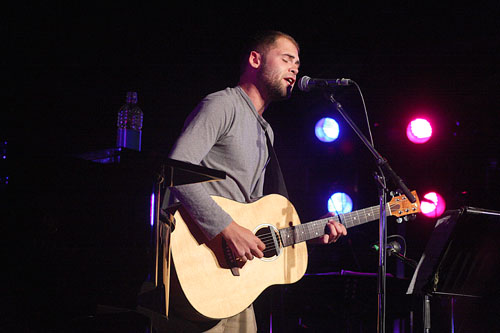 This coldness was not lost on the support act, Passenger, who took to the stage asking "is this the coldest venue you've ever been to?" Passenger is Mike Rosenberg, a singer with a guitar and not much else - literally in this case as he explained he'd just flown back from Australia and "all my own kit is stuck in holding somewhere in Holland." After a few sound problems, Mike settled in to a half-hour set of songs that while plaintive and heartfelt, had a humour that stopped them from being too melancholy and warmed up the initially uninterested audience. 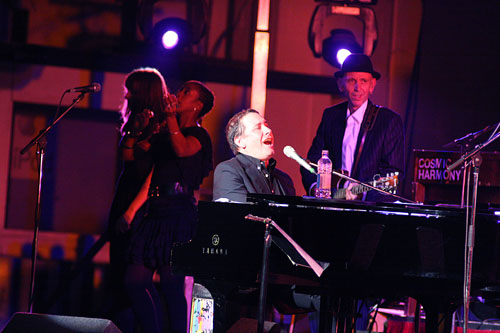 After a short break and, despite the abundance of ice, a warm bottle of beer, it was time for the main act. I've watched Later since it started and thought I knew what to expect from Jools Holland and the Rhythm & Blues Orchestra, but I was surprised by the added value you get at a live performance. Jools is a charismatic frontman and an undeniably talented pianist, but the live show really allows you to appreciate how talented the Rhythm and Blues Orchestra are. As good as Jools is at tinkling the ivories, his band are equally talented at their chosen instruments, with some playing several different ones through the course of the show. Jools, ever the consummate gentleman is happy to take a backseat and enjoy their performance when they step up to take the lead. After introducing them in much the same manner as he does guests on his TV show, he sits back down behind his piano and almost melts into the band to allow them their moment in the spotlight.

You do not have to be totally familiar with rhythm and blues to enjoy the evening, as the infectious pleasure the band obviously get from performing quickly rubbed off on a crowd made up of all ages, with original compositions, like 'Remember Me' and 'The Wicked and the Weak', and covers of Muddy Waters' 'Got My Mojo Working' or Patti Page's 'Tennesee Waltz' getting equally good reactions.

Highlights of the evening included a drum solo from the highly talented Gilson Lavis, a ska version of 'Wonderful World' performed by trombonist and vocalist Rico Rodriguez. The best performances of the night came from the women on the stage, firstly with Louise Marshall stepping up from the backing singers to give an assured and powerful performance. Then followed the two big names of the night  Alison Moyet and Ruby Turner.

Alison is best known for her solo career and time with Yazoo, but this evening enabled her to show off her considerable vocal talents as a soul singer. Starting off with 'Love Letters' - the song she made a hit in the 80s, Alison also performed a cover of John Lee Hookers' 'Boom Boom', and finished with her biggest hit 'Only You', it didn't seem long before she was off again, to make way for Ruby Turner.

Ruby has been a long time collaborator with Jools Holland and has performed with him since the formation of the band. Although small in stature she has a very big voice and an attitude to match that lent the songs she performed a passion and intensity, particularly the rousing gospel belter 'Big Train', that leaves you feeling exhausted for her. 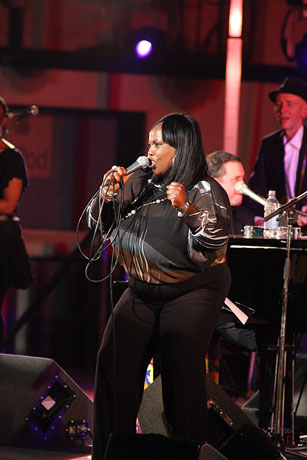 After almost two hours of solid performance the band left the stage and came back to perform an extended version of 'Enjoy Yourself', the song made famous by The Specials, and that seemed to sum up the evening for me. The enjoyment that they have for music and the chance to share it with others, is the driving force behind Jools Holland and all the members of the band. If you get a chance to see them on their tour then go, it will be a happy memory that will stay with you for a long time.