For those of you who have had your head in the sand for the last decade or so, the O2 is what they converted the Millennium Dome into once they realised no-one wanted to celebrate Britain anymore, and I have to say a fine job they've done of it. The outer area of the dome boasts a selection of pubs, clubs and restaurants that would make for an entertaining evening out even if you weren't going into the arena itself. Arriving a couple of hours early and after a quick trip to the merchandising stand for the obligatory T-shirt and programme, we settled into a bar for a couple of pints pre-show.

Entry into the arena was easy, even if the one way system to the upper tier meant we had to double back on ourselves to get to our seats. Once inside the arena (which was a little smaller than I had imagined), the view form our seats was pretty good  unlike those 2000 or so people who'd been sold tickets behind the stage, who saw very little of the support and only the back of Muses heads for most of the show.

The support band for the evening were The Big Pink, who most will know for their song 'Dominoes' which is currently airing on the Guitar and DJ Hero adverts. They worked their way through a fairly average set of unmemorable songs before finishing with 'Dominoes'. The biggest complaint against them though was their insistence on using strobe lighting exclusively during their show, which meant it became physically painful to look at the stage for more than a few seconds at a time and didn't make you want to listen to them much either.

A half-hour break to clear the stage of the support's instruments gave us a chance to visit the toilets, which for a large arena were plentiful and pretty clean for a change. 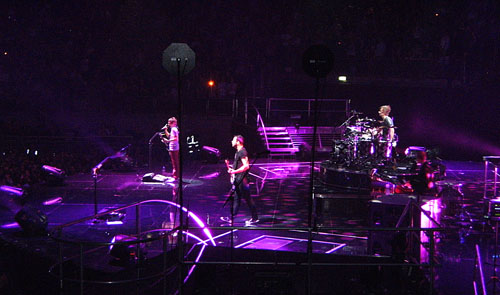 At 9.15pm the lights went down and Muse took to the stage, each member of the band on his own tower with video screens above and below displaying a mix of live footage and video graphics. The rule of setting up a Muse gig seems to be to ask themselves what would be the most you should do, then add about 10% on top, and the lighting rig was no exception  I lost count of the number of lasers mounted all round the stage.

Launching straight into new tracks 'Uprising' and 'Resistance' the entire audience were on their feet immediately  even those perched precariously in the gods  cheering and singing their way through a set which gave a good balance, pleasing fans of both their older, grittier songs or the pop-rock direction of the last couple of albums. This is Muse at the top of their game, and Matt, Chris and Dominic are natural performers who use the stage well and performed to those at the sides and back as well as those out front. 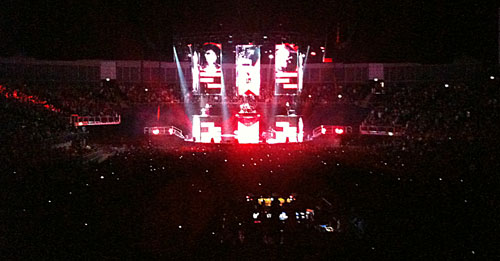 Favourite songs for me was 'United States of Eurasia' with its Queen-inspired pomp, and 'Feeling Good'  a song that was missing from the earlier stages of the tour, but the track that first got me into the band. 'Plug in Baby' got the biggest reaction from the crowd with everyone pogoing in apparent unison to the energetic performance. They finished the first half of the set with 'Unnatural Selection' to much cheering and applause before returning to the stage to finish with 'Exogenesis Part One', a blistering version of 'Stockholm Syndrome' which was just a wall of sound with vocals and guitars appearing from the melee. And the brilliant 'Knights of Cydonia'  played with all the pomp and energy that the band could muster  which closed the show and left the crowd on a high that even the 45 minute crush outside the tube station couldn't dampen.