The clocks have gone back today and it's dark as we join the long queue waiting for the doors to open. The queue at the bar is a long one at the Lemon Grove and we get our drinks after Bean On Toast has already taken to the small stage. 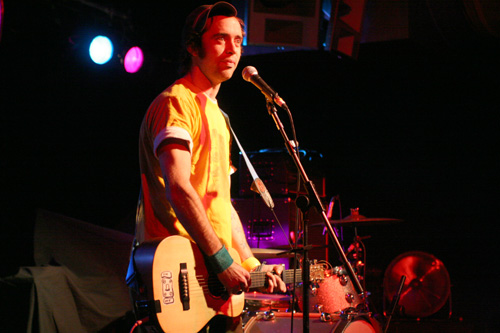 Beans On Toast has a rough, deep, gravelly voice that's likely to scare the kiddies, it's just him and his guitar and a bunch of tunes he's penned. He tells us last night's show in Plymouth was a bit mental, and his plan is to play different songs every night on this tour. He's taking requests and tonight's headliner Frank Turner is watching from the wings, shouting out requests, that Bean On Toast happily plays. There's songs about drugs with subjects like giving up K (Ketamine), cocaine, and about the season of "Halloween", 'Christmas At Tesco', and 'Fancy Dress Freak', and being with an older woman, "Classic Cars". In between songs he recounts tales of the after party bash last night, which includes him signing his first penis  no he won't be doing that again tonight. The songs are well versed, he gets the crowd singing the choruses, and the London based singer goes down a storm. Worth seeing at festival next summer. 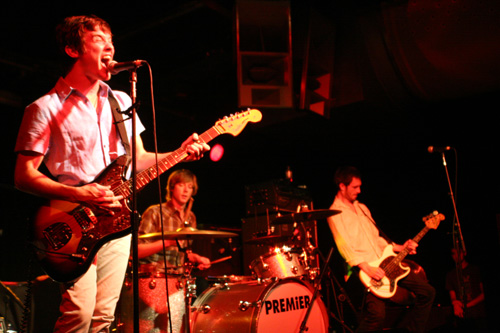 Next up are Florida based four piece Fake Problems, they start with 'Dream Team' and it has a marching beat, and the lead singer Chris Farren provides a scream-along vocal. Break up song 'Heartless' is introduced as "This song is called 'I Can't Believe For All Those Years You Wouldn't Let Me Smoke Weed and Then Right When We Broke Up You Started Smoking Weed'." The band start well sounding reminiscent of The Clash mixed with the drum beats of a marching band, but end up a much more guitar noodly based band. The middle section of the short has appeal with pounding rhythms the change to guitar based rock loses my interest, and by the end I'm outside talking to Beans On Toast about festivals, and watching a rapid trade in spare tickets.

The place is rammed, with everyone bunched up by the stage as Frank Turner and band take to the stage, to the strains of 'Drink Old England Dry'. The band kick off with a heavy, thumping rocked up 'Live Fast Die Old' with wurlitzer-esque keys underpinning the song. The new songs from Frank's latest album 'Poetry Of The Deed' alongside older songs. Some like 'Queen Is Dead' are really revitalised with a crescendo of guitar, others see Frank more acoustic playing solo, and we even get a Million Dead song, 'Smiling At Strangers' from Frank's previous musical incarnation.

The show is sold out, and it's his third of the day, having previously played Manson's Guitar Show, and a local wine bar. You'd expect Frank to take it easy on his fingers but the speed is relentless, and frenetically paced. As usual a member of the audience is selected, Andrew, to play a harmonica solo and does a grand job. 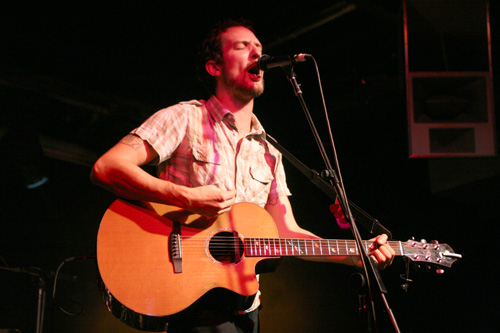 The pace slows, and Frank also alludes to a fairly mental night in Plymouth yesterday, and it seems many of the crowd were there. The audience is not just students from the campus which hosts the venue, but a wide range of ages. All of which happily sing along as the place takes on the feel of a drinking hall. Rather different to Frank's first visit to Exeter with Million Dead in 2002 where he played the Cavern at 1am to about three people.

As usual the preamble of "My name's Frank Turner, and I'm from Winchester" signals the end of the show with a few quiet numbers, the band joining him half way through the lively 'Reasons Not to Be an Idiot' before all the support acts jump onto the stage for an uptempo finale with 'Photosynthesis'. It's been a perfectly weighted set, and we head out into the night feeling we've been part of a glorious session of drinking songs, the rosey glow of the finale has lifted our hearts, and we've danced and sung with wild abandon, a terrific achievement on a Sunday night. 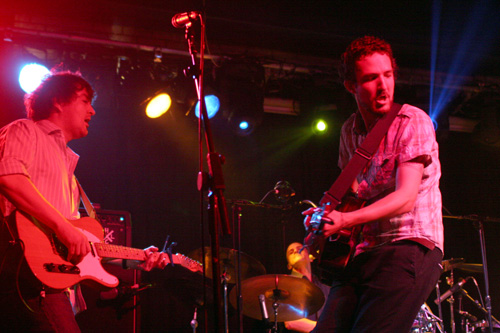 Set list:
Live Fast Die Old
The Road
Long Live the Queen
Substitute
Try This At Home
Dan's song
The Real Damage
Poetry of the Deed
Nashville Tennessee
Our Lady Of The Campfire
Smiling At Strangers
Sons Of Liberty
Barbara Allen
Love Ire & Song
Father's Day
I Knew Prufrock Before He Got Famous
Journey of the Magi