With the Scala just down the road I find there's not much reason to miss gigs there and the opportunity to catch Dananananaykroyd again this year couldn't avoid. Their energetic live show is something not to be missed even if your not a fan of more hardcore music.

The support started with a good old slap-dash set from b>Calories. Joking between songs about how they'd hardly played recently and having played their best tune at the start of the set kept the early-birds at the gig amused and entertained. Dinosaur Pile-Up followed with a tighter more controlled classic americana style rock set. Chunky riffs, driving beats and slightly whimsical vocals don't make the most imaginative groundbreaking sound but they pull it off with a certain finesse. 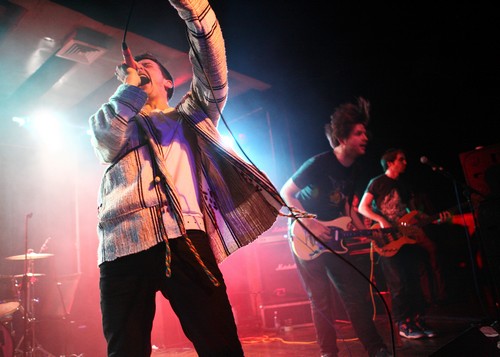 Having the crowd nicely warmed up by the support the anticipation for Dananananaykroyd to come on is not hard to miss. Chanting 'dananananaykroyd' might not be the easiest thing to do but it seems to work as a Halloween themed intro tune of distorted fairground music and dimming lights welcomes them to the stage. Not wasting much time, they kick into 'Totally Bone'. With a bit more room on stage to jump around they make the most of it. Calum Gunn starts off with a bit of mic swinging and scissor kicks while John Baille Junior runs between the second drum kit and the crowd for hi-5s and hugs at any opportunity in between his backing vocals. 'Watch This' gets the chanting going again and the crowd start to get properly into it. With songs barely lasting 4 minutes the energy is always moving keeping the everybody buzzing and dancing along. 'Some Dresses' and 'The greater than symbol and the hash' keeps the frantic pace up with its rich lead guitar licks above the frantic trashy backing guitar and drumming. At some point they make way for their trademark divide and mass hug. Always fun and a great way to bring people together!

'Infinity Milk' has one of my favourite guitar licks leading into the song, and as more people sing along to it than any of the lyrics I cant be alone. Cheerful, poppy and with a little bit of grit it shines out above the maelstrom of chaos around the stage. Follow this up with one of the funniest stage invasions i've seen to 'Pink Sabbath' left me laughing. One slightly-crusty long-grey-haired rocker left the band a little confused but security managed to peacefully clear the stage... hahaha. 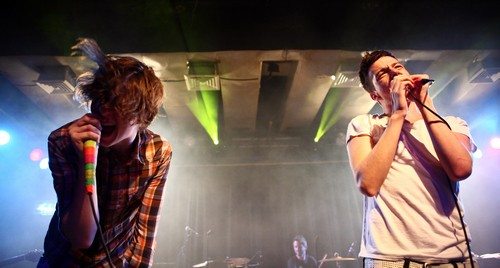 Testing out a couple of new songs 'Jigsaw Rickshaw' and 'Bodies like Holes' kept the energy going without hitch and led into the end of the set fantastically. As far as comment about the new songs critically...nah. Go and find out listening to them live, far more fun than reading about it. One band that its impossible to feel disappointed with, these guys can make even the grumpiest sod cheer up. Quality stuff.

Setlist:-
Totally Bone
Watch This
Hey Everyone
Some Dresses
The greater than symbol then the hash
Infinity Milk
Jigsaw Rickshaw
Pink Sabbath
Bodies Like Holes
1993 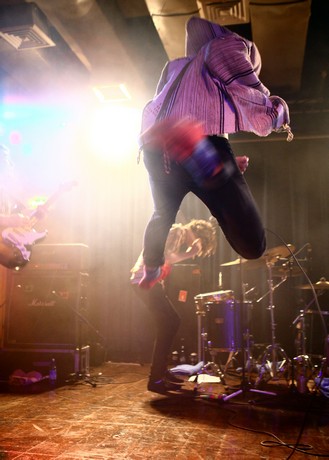