A last minute change of venue sees us arriving at The Bullingdon Arms on Oxfords Cowley Road rather than the O2 Arena just up the road. The back room at The Bully as its known locally is probably about a third of the size of the room in the O2 so speculation about poor ticket sales spreads until one of the door staff squashes the banter by informing us it is to do with licensing issues. The pub itself has a good range of beers and the back room, though small seems to have a more than adequate sound rig with laid back reggae grooves emanating.

The lighting (a couple of static red LED spots), livens up a bit as Greg Dread arrives on stage to announce the rest of the band. They kick off with the rousing and aptly named Wakeup Call. Dreadzone are really in their element at festivals but somehow, the electronics (played out of an Apple Mac), are much clearer and far easier to pick out in this more intimate surrounding as they bounce off the walls. As the 303 winds to a warbling and squelching close, Earl 16 explains that he will be standing in for MC Spee whose daughter is in hospital. We wish her well, and Earl 16 is a regular live performer with Dreadzone so this wont cause him any problems. 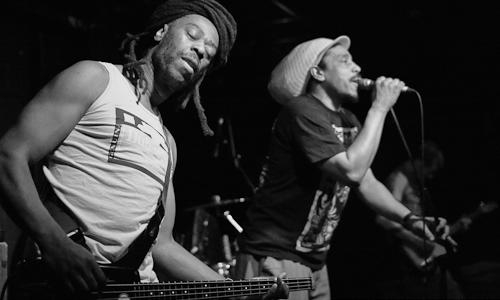 His voice is well suited to Life Love and Unity and though perfectly able to pack a punch, it still sounds gentle enough to deliver sincerity in the quieter moments, but this is Dreadzone so those times are few and far between. The summer sounds of Once Upon A Time and Zion Youth keep the festival vibe building and cries from Greg on drums for his Dreadzone bouncing crew keep us all moving. Its between songs that Spees absence is really felt. Its not that theres any lack of cohesion between the band, quite the opposite, they seem really tight, its more of a continuity thing. The tracks build and build and Spee has a knack of keeping everyone fired up between songs and in quieter moments while the rest of the band take a breather. Without him there is a slight slow down. It doesnt really matter as the next number Tomorrow Never Comes has a gentle start compared to some of the more frantic numbers. Its available as a free download and Dreadzone are really good to their fans. Check out their website for more free downloads as theyre really rather generous with their tunes.

Lion Shirt with its hooks borrowed from Max Romeos Chase The Devil moves the party vibe up a couple of notches with its opening bars and the 70s disco guitar breakdown in the middle is a touch of genius. Earl 16, sporting his Beautiful Days Festival shirt seems totally engaged with the crowd and if he smiles any more, hell have to stop singing. Digital Mastermind follows and the bouncing bass is so low it reaches inside my ears, and feels like it jumbles up my insides. Its one of my favourite tunes and it goes down really well with the sold out crowd tonight.

The highlights of the show  for me are saved for the sweaty finale. Little Britain and the opening bars are met with a roar and the song gets underway only for it to be stopped and re-started again (they seem to do this quite regularly for this track). Once they get going, its like half of the crowd are dancing in order to power the lighting, rig and instruments, as we get further and further in, I look around and I cant see anyone standing still. Everyone is not just moving in time, but really going for it. As the song draws to a close, the band leaves the stage. Were not going anywhere because we know whats going to happen next. 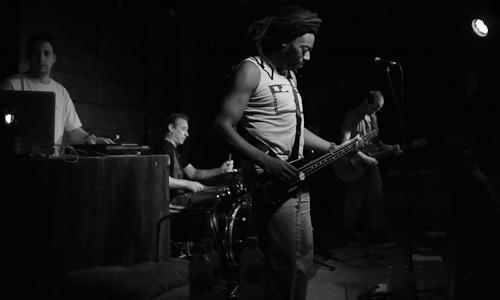 After a short interlude, theyre all back out again and Gred Dread makes his way to centre stage. Hes got a daft grin on his face and as he fights back the excitement he tells us that he never gets to do this bit. He then lets fly and shouts AHOOOOOOY! into the mic and we reciprocate with a ground trembling Ahoy back at him. After a brief exchange, he heads back behind the tubs and bangs them with all his might through Captain Dread. Again, an erupting crowd senses that this is the last moment for their energy release and now with Earl 16 shouting AHOY with a punch edge, the track winds down and were all left applauding as they leave the stage.

Sometimes when evenings dont turn out the way youd expected, its a good thing and tonight is definitely one of those nights. Obviously our thoughts are with Spee and his family, weve missed his energy and wish him well. Weve had a really great night and look forward to seeing the full Dreadzone line-up together again.