WIN! Levellers tickets and an exclusive promo copy of 'Live at The Albert Hall'

eGigs is offering four of our readers the chance to win a pair of guest-list tickets to see Levellers the gig of the winners choice, plus an exclusive promo copy of the band's album 'Live at The Albert Hall'.

After a storming performance at this year's sold out Beautiful Days Festival, the Levellers are pleased to announce the release of a very special live album on 9th November 2009 and the dates for their UK Winter tour. The album will be available from all major download stores.

The 10 track live recording has been taken from the band's unique performance last year at London's Royal Albert Hall. The show was a gig in two halves - the first an acoustic set and the second electric.

According to Jon Sevink from the band, "We booked the show a year and a half in advance so we had plenty of time to prepare. You can't treat it like a normal gig. We thought we'd tart ourselves up a bit by using a string quartet, a grand piano and some professionals to add some 'class' to the proceedings. We all had a great night. I was telling myself 'don't miss a single moment', absolutely loved it. Very emotional."

During the performance the recording equipment crashed and several songs were lost from the final recording. 'Live at the Royal Albert Hall' features songs from the albums 'A Weapon Called The Word', 'Levellers', 'Zeitgeist', 'Mouth To Mouth', and 'Letters From The Underground'.

The track listing is as follows: 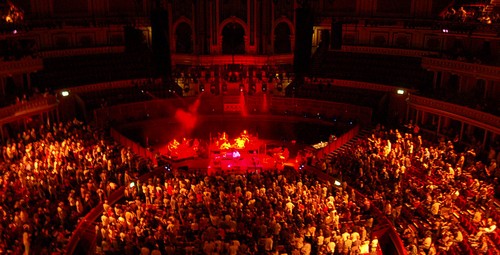 When asked about album highlights Jon sais, "The recording of Before the End from our last album 'Letters From The Underground' is better than the recorded version."

To celebrate the release the band will be taking to the road for a string of European and UK dates, which will see them airing old favourites from their hit-rich back catalogue - and perhaps a few previously unheard tracks.

The fiddle player added, "We've already started writing for another studio album. I think we'll gradually add new tracks into our live set and when we've got a collection that everyone likes we'll record them."

The band will be playing at the following dates:

To celebrate the release of the "Live at The Albert Hall" album out in Nov - and the up coming live dates. eGigs are able to offer four exclusive promo copies of the album out on download only - signed by the band and also a pair of guestlist tickets to the gig of each winner's choice.

Legal stuff: Only one entry per person. The competition is open to all UK residents OVER 18, except employees of eGigs.co.uk and companies involved in the competition. Closing date for receipt of entries is 9am, Monday 16th November 2009. The winner's name, and the results, will be announced on this webpage soon after. The winner will also be informed via email. The winning entries are selected at random from all correct entries. The judges decision is final.
article by: Scott Williams
published: 14/10/2009 08:53