The opening night at the brand spanking new Birmingham 02 Academy (which has moved from Dale End to John Bright Street, taking over the premises of the old Dome nightclub) saw the return of the almighty Editors to their home town after a break of over two years. This was just the first in an amazing series of gigs set up to celebrate The 02 Academy's astonishing £5 million refurbishment, with the likes of The Twang from Quinton, The Streets (Mike Skinner the devout Blues fan) and Ocean Colour Scene being thrown into the mix for good measure too.

The new refurbished site boasts urinals that light up and a very swanky VIP area for the artists! Free drinks flowed and Aftershow party passes were handed out two a penny as Editors blasted the place apart with a fantastic 90 minutes set. It consisted of songs from eagerly anticipated new album 'In This Light And On This Evening' [due out on October the 12th], as well as the band's debut album, 'The Back Room and second album An End Has a Start'. 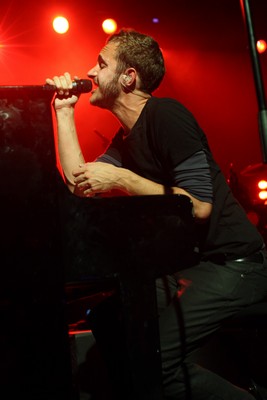 New songs were played aplenty, with the set being kicked off, to rapturous applause. The first chords of 'In This Light And On This Evening' were struck and the crowd just went into a frenzy. The new material was very well received, seems very New-orderesque and more electronic-pop, and I loved what I heard; In fact it made me want to listen even more. I can't wait to get my hands on a copy of the new album; this gig just whetted my appetite for more.

New tracks included 'Eat Raw Meat=Blood Drool', not one for vegetarians!, followed by 'You Don't know love', 'The Boxer', 'Like Treasure', 'The Big Exit' and new single 'Papillion', (which apparently has a remixed version by Tiesto), which is out of this world.

Of course, an Editors gig wouldn't be the same without the traditional moshing songs and fists punching the air, so this gig was no exception. 'An End Has A Start' had the crowd listening to every chord and joining in with every word. 'Bullets', 'Bones', and 'Racing Rats' saw the crowd jumping around and squashing each other like sardines against the barrier. As the temperature rose a few degrees, you could see the glistening brows and bodies drenched in sweat from the seated balcony as the venue got hotter and hotter throughout the night. Classic such as 'Blood' and 'Fingers in the Factories' were gobsmackingly good too.

For the encore, 'Smokers Outside The Hospital Doors' burst out of the speakers and everyone was in awe, Even Tom Smith's girlfriend, Edith Bowman, was going mental and shouting, taking photos at every opportunity for her Twitter page. 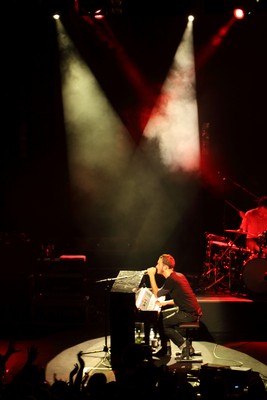 The set finished off with the Editors classic 'Munich'. There wasn't one bum left on a seat on the balcony, everyone was on their feet chanting and giving it some welly.

The final song was 'Bricks And Mortar', another newbie that seemed quite a strage choice to finish the set with. BUT the crowd were up for anything by this time, hot, sweaty, smelly, and buzzing. If that's how you feel at the end of an Editor's gig you know it was well worth the ticket price.

Editors never ever disappoint live. The new material was amazing, totally out of character for this Indie band and I am sure that this new direction will only serve them in good stead.

The only criticism from the whole set was there wasn't much banter from the band at all, only one comment from lead man, Tom Smith saying, "You're too kind. We've played a lot of new songs tonight and we messed that one up"(referring to one of the songs they completely messed up and Smith when Smith smashed the keys on his piano in anger at their mistakes.

This gig has had mixed reviews from fans on the Editors forum, some absolutely raving about it and some saying it's the worst Editors gig they've ever been too. You can't please everyone all of the time, but if this show was anything to go by watch out for Editors up and coming UK Tour in October and make sure you check them out. 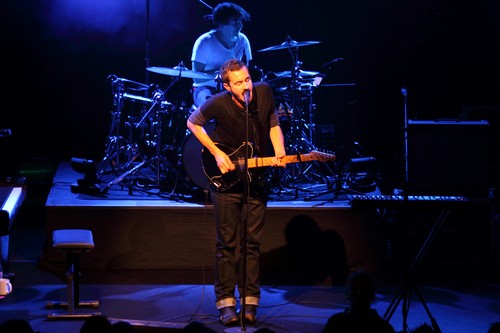