How many unsigned bands can charge £10 entry fee for a Sunday night gig and receive a healthy turnout? Babyhead's first gig of 2009 at the Thekla did just that as fans gathered to see the band showcase their new material and line-up change. The £10 hadn't appeared to put people off and why would it as over the year's Babyhead have supplied Bristol with top quality entertainment on a local level. To see them live has always been a guarantee of a high energy music backing skillful vocals.

Their fanbase are a devoted crew and so it was little surprise that they were curious to see what was on offer after the bands six month gig absence. Three members have now, for whatever reason spilt from the band (amicably it seemed as they had become keen members of the audience) and on this particular night there were no horns, although Mancub assured the crowd that future gigs will sometimes include the brass. 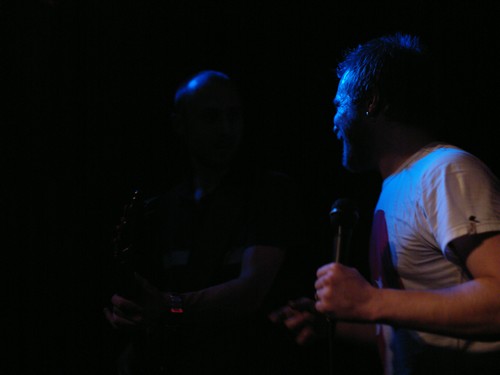 As they took to the stage they missed the glamour that a horn section can provide but more importantly this was a test to see good the band currently are and how Mancub would perform as solo vocalist without long time friend and co-frontman Bloodworth. As a dab hand at rocking a crowd tiny frontman Mancub was undaunted by the task that lay ahead of him and looked comfortable as they launched into their opening song.

The tempo that the band played was somewhat more relaxed compared to past escapades but the crowd dutifully moved along in response to the groove. The song was raw and had a slight feel that they could be a little bit more polished for a live performance and yet still had the Babyhead sound and quality. The dub influence was still apparent from the bass to Mancub's overzealous fiddling of his effects unit and it's echoey delays.

An old favourite, 'Recording Device', was aired to jubilant cheers and maybe from outside the Thekla it would have been possible to have seen the boat begin to rock. It was a perfect song to pay tribute to the past and herald a new era within the band. Back into new material and Babyhead began to increase the speed but never achieved the frenzied activity from the punters that they have in past gigs but nevertheless a mosh pit began forming in the centre. As the mosh pit grew it finally prompted Mancub to calm the audience down somewhat and telling them that they need to be careful of the little people at the front joking that he remembers what it was like as, "he too was little once."

With almost an hour of material, including a rather fun instrumental track, the performance ended almost abruptly and with no encore as Mancub explained they hadn't yet written one. The choice of final song could have been better perhaps too as it all felt like such an anti-climax that it was a surprise when the band began to exit the stage.

It's hard not to love Babyhead, as musicians or performers. Their characters shine through on stage and they appear to truly love entertaining an audience. Mancub as a solitary front figure is a formidable package of energy. Seeing him perform as a duo with Bloodworth was truly an amazing experience and it remains to be seen if Mancub can be quite as watchable without him, but the fact is bands experience line-up changes and evolve. More importantly perhaps is that Babyhead as still here, albeit in a slightly altered state but with an album in the making and more live performances due it seems that 2009 may be the year that Babyhead prove if they still have what it takes to make the fans happy. The answer is currently inconclusive but they are definitely showing positive signs.
article by: Richard Potter
photos by: Richard Potter
published: 07/05/2009 07:48