The forum holds a special place for me. As the scene of my first ever gig, its nice to go back to see a band that I've followed for a fair few years, so it's a special trip down memory lane. The venue is nowhere near full as we arrive but it still seems to have a bit of a buzz about it. 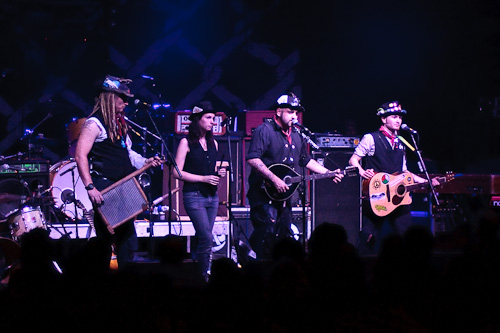 Hobo Jones and the Junkyard Dogs have just settled on stage and it seems odd seeing them inside as previously I've only ever caught their appearances outside at festivals. They're playing a cover of 'American Idiot' and giving it their own special treatment. They describe their sounds as 'skunk rock'. A cross between Skiffle and Punk it's a pretty unique sound. Using a washboard, tea-chest bass, and acoustic guitar, coupled with percussion (in this case hitting anything against anything to produce their desired noise). During one of their songs, they unearth a plastic violin, which they claim has been leant to them by the Levellers, they proceed to whack it with a big metal spoon (albeit melodically), until it breaks). They are true entertainment and the almost obligatory cover of 'Gordon is a Moron', and their very own 'Tyburn Jig' is well received. 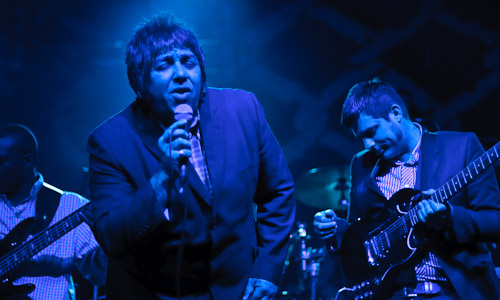 As they leave the stage, the crowd has multiplied and after a very short wait, we're treated to Pama International. Their number is missing a star  Lynval Golding is back on duty with the current incarnation of The Specials. His guitar skills seem to be pretty well matched, but the still star studded ensemble are  in my opinion  missing his outgoing personality and 'bonkersness'. They bang out a number of my favourites from their back catalogue, 'Second Chance' and 'All About The Money'. The horn section gives an absolutely blissful contrast to the frantic drumming. Both are impressive in their own rights but I'm amazed by how frantic a drummer can be in delivering a sound that sounds so laid back. Despite the sound rig coming over as a bit muddy and confused, they leave the stage having added a bounce to my stride.

Heading off to the bar, I recognise a few faces from visits to Levellers Beautiful Days festival. It feels quite nice  even though I don't know any of them to speak to  to see so many familiar faces. Even Hobo Jones has joined us to see the main band. 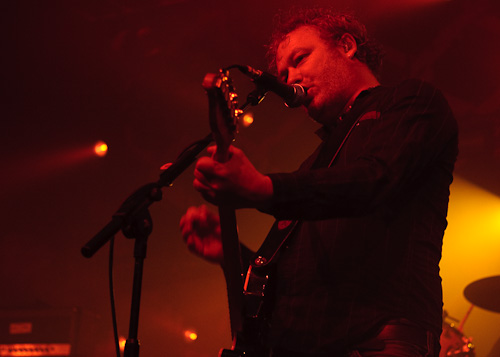 Somehow Levellers manage another spine tingling entrance onto the stage. I'm not sure how they still manage it after 20 years together. As the bagpiped introduction subsides, they crash straight into 'A Life Less Ordinary'. The lyrics seem to offer an insight into life on the road in the early days of their careers (or perhaps I'm reading a bit too much into it and getting carried away in the moment). If there is any question of getting carried away in the spectacle, 'Beautiful Day' serves only to push that feeling on. Part way through the song, the stage lights seem to fail. I'm later told that in photography terms, this is a disaster, but from my vantage point, the recovery is swift and the end result is an eerie backlight that creates something spectacular. A white light behind the drums means that the band cast a shadow over us all. The sound still feels a bit confused and my change of location doesn't seem to ease my confused feeling ears. Spirits undampened, the crowd continue to bounce in unison and 'Burn America Burn' brings back the lights and a new found enthusiasm.

The slight slow down for the start of '15 Years' brings some respite from the pogo pile at the front and a reminder for me that I'm not quite in the right place to hear the sound as it should be heard. I find this one a number with some emotion attached and although it's not quite as clear as I'd like to hear it (bass and low end drums seem confused and Jon's delicate fiddle and the cymbals feel at odds), it still manages to bungee on the heartstrings.

The Levellers are not a band for going stale. Have I already mentioned that they've been together for 20 years? Well in that time they've been pretty prolific and amassed a substantial back catalogue. This time around they've done something a bit special and left open to the public a number of favourites to be included in the set for this tour. The first of these gems is 'Exodus'. The words and feelings could create a nu-skool dance fan from an old-school raver. The bouncing doubles and we become the collective described in the lyrics. 'World Freakshow', '