Having never seen the real Pink Floyd in the flesh this is the closest I will get to witnessing the amazing spectacle that is one of their live shows. I have seen Roger Water perform 'Dark Side Of The Moon' a couple of times, but that with its Quad sound can not beat tonight's version of the entire album that is 'The Wall'. 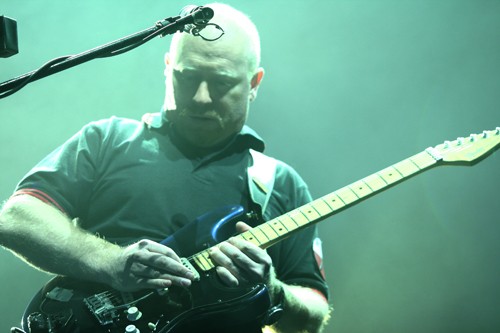 The Aussies are well known as the best Pink Floyd tribute band in the world, and are maybe the best tribute band in the world full stop. I would love to know how much the stage shows cost, as they take their version of the big budget production across arenas around the world. Australian Pink Floyd are similar to the original band in almost coming second to the lighting and visual show that transpire around them, even sometimes playing in the near dark!

For a first timer, this show is spell-binding and completely absorbing. I must say I am still not quite sure about the film version of The Wall, but understand the story behind it, and the crazy visual animations and theatricals of the band make it a little too alluring. They are not performing behind a huge wall on stage, instead we get the band playing the entire 'Wall' album under a huge screen with their own animations (the marching hammers have silver kangaroos on top instead of hammerheads), so that's an impressive 2 hours 30 minutes of high quality animation made to look like the original animations for the film.

To the left hand side of the stage is a huge inflatable of the teacher's head from the 'Another Brick In The Wall' video. For the song 'Young Lust' a pair of ladies legs with tights and a gusset dangle above the band. To add effect the song 'Run like Hell' a huge boar (from Pink Floyd's own 1994 division Bell tour) is pushed near to the crowd on the right hand side, complete with menacing red eyes.

Then there are the little bits, like the armchair, lamp and TV that sit in the middle of the stage during Pink's spiralling downfall. The TV on stage actually corresponds to the TV in the animation, with the same picture and sounds. One of the three female backing singers plays Pink's girlfriend before singer Ian Catell sings 'Nobody Home', and there's more minor acting from Catell as a dictator in 'In The Flesh' and 'Waiting For Worms'. 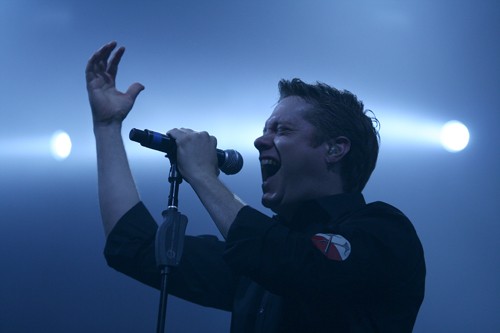 The most disturbing part of the show is when the set list hits 'The Trial', just before Pink (shown as a basic pink character on screen) breaks down the wall. For over five minutes you can feel the torture of this man recovering from hell, with huge lighting set ups and lasers, reoccurring scenes from the past videos and weird visions. The lighting for the entire show is spectacular (for lack of a better word), with strong green lasers, (especially during 'Comfortably Numb', where the visuals are turned off), white beams over the crowd to look like helicopter search lights and flashing colours lighting up the whole arena. I need a break when the intermission kicks in after 'Goodbye Cruel World'; I feel exhausted just from watching!

And it doesn't end after there. Once everything dies down the whole band comes together around one microphone to perform 'Outside The Wall', then after a brief pause it's straight into the encore with 'Shine On You Crazy Diamond'. 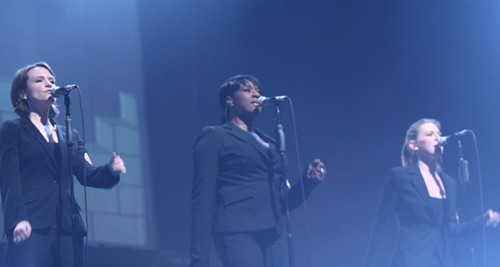 Then its a few more classic hits, with 'Wish You Were Here' getting the largest applause and a stunning vocal turn from one of the female singers on 'Great Gig In The Sky', backed by visuals of the inside of a wave and past Pink Floyd musicians' faces on the screen. There are humorous moments too, with sound clips of Neighbours, Rolf Harris, Sons And Daughters and Men At War all getting a chuckle.

This is a truly elaborate show but one I insist that any Pink Floyd fan goes to see. Some of the old PF crew work on the drums and sound, David Gilmore himself had them play at his 50th birthday and it really is a close to the real thing as you can get. I just wonder ho much electricity they use to power all the lights; it must be comparable with the surge the grid gets during the Corrie ad break when everyone goes to make a cuppa!

Hey You
Is there Anybody Out There?
Nobody Home
Vera
Bring The Boys Back Home
Comfortably Numb
The Show Must Go On
In The Flesh
Run Like Hell
Waiting For Worms
Stop
The Trial
Outside The Wall