I reckon Alice Russell would beat Duffy in soul singers Top Trumps if such a game existed. No surprise then that we arrive in good time to get into the Scala near Kings Cross in London, but alas the queue seems to take ages. Inching forward, we make our way in and after the usual searching rigmarole we find the bar and then the dance floor. It's rammed but then this is no ordinary gig. It's the launch party for Alice Russell's New Album 'Pot of Gold' and their support band is on stage as we find a vantage point.

TM Juke (who produced Alice's new album), plays lead guitar, and is backed by The Jack Baker Trio. They cover The Meters 'Stretch Your Rubber Band' which musically is spot on until they hit the vocals, at which point it all goes a bit downhill and sounds off key and a bit all over the place. Just in time, they are joined on stage by Andreya Triana who lends a new dimension to the sound. They cover 'Aint Nobody' and Marvin Gaye's 'Let's Get it On'. Both of which seem to improve on the originals. The horn section really adds more depth and the trombone player, coupled with Andreya's voice leave us with a warm glow as they make their way off stage. 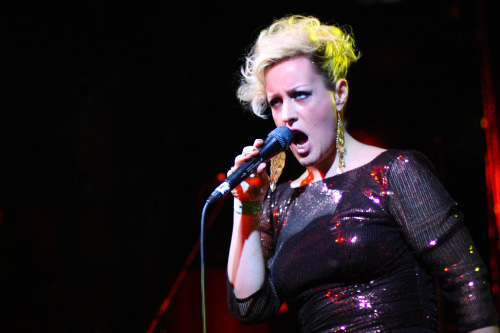 A break between bands offers an opportunity for some unfresh air and together with some other newly found friends, we decide that trombones played close to the edge of the stage should have a white rag tied to the end. That way, those down the front don't get poked by the brass section (so to speak).

Back inside and it's not long before the backing band return in white and Alice Russell takes her place. The audience show their gratitude and she explains that even though this is an album launch, she'll be playing some old and some new tunes. Things get started with 'Humankind' and although I've heard the song before, it still amazes me that she can hit the notes and cover the vocal range live. I think there are a few other amazed people out there too. It's one of those situations where none of us are shy about whooping, applauding or showing appreciation part way through a tune. I haven't experienced it to this extent before but I'm not shy about joining in, it seems more than deserved.

Next up it's 'Search the Heavens', a Quantic tune which Alice appeared on. It's as the song gets played through that I realise I'm surrounded by people singing their heart out, Alice Russell is amplified, and yet I can still hear her unamplified voice. The strength of her voice has to be heard live to understand that it's not a production effect, there's no mystery, she's just a bloody amazing singer. 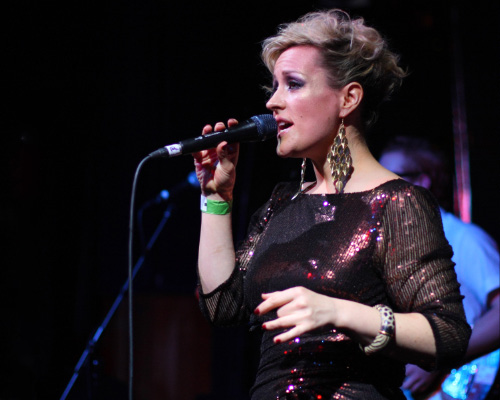 As the gig continues, the delights of a violin in a soul/ funk situation become clear. It's not really something I'd ever imagined or would think of but it fits really well. The style combines traditional Soul, Jazz and Funk then blends it all together and gives it a modern twist. There are moments of hip-hop and house vibes but the outstanding feature is that voice. She is also blessed with an amazing stage presence and after a particularly rousing song, she shows how pleased she is to be surrounded by sweaty men on stage.

A cover of '7 Nation Army' put together in a unique way is probably my highlight of the first half of the set for me although it's a close run thing. When they play 'Big Shiny Laser', the effects from the keys and theremin and TM Juke on the guitar send me off to another dimension.

Alice leaves the stage and on come the brass section for some funk! When She comes back, it looks like someone has slipped with the glitter and she is now sporting a spangly sideburn. It doesn't detract from the rest of the new outfit and they're off again.

'Two Steps' and a cover of the Gnarls Barkleys 'Crazy' top the 2nd half for me (both appear on the new album). It's one of those occasions where I'm not dancing much and the shivers running up the spine mean I'm probably just standing there with my mouth ajar looking gormless in amazement. All the while, I'm trying to think of something that isnt spot on about tonight and I'm struggling.

Tonight is a special one and I'm going to start a campaign for Alice Russell to sing the next James Bond theme.