eGigs talks to the Stone Gods

After being escorted through the weird and wonderful backstage corridors to the rock city dressing rooms, I am greeted by a friendly "hello" and made to feel at home as the band members of Stone Gods take precious time out of their warm up time to speak to eGigs...

After playing festivals and arenas in your former project (The Darkness) what is it like doing a support slot?

Dan: To be honest, it's a lot less pressure in some ways. You're the underdog. You're like...

Robin: ...The bonus from an audience point of view. The fans know what they are getting with Airbourne, we have got a few hundred of our fans here, I haven't done a support slot for twenty years, it's a good experience, forty minutes- go smash the hell out of yourself, and then get off, you can reach maximum velocity early and stay there for the whole show, whereas if your doing an hour and half, you have to back off a little bit.

Dan: In my career, I've supported bands more than I've headlined, in the previous project we supported Alice Cooper, Def Leppard, Lynyrd Skynyrd, Rolling Stones, Metallica, Whitesnake, the list goes on and on.

Robin: if the billing is right, its okay.

You played the Download festival earlier this year, how do you feel that went?

Robin: I thought it went really well? That's was our first festival. That was my first gig.

Dan: We were thrown in to the deep end at Download, we had about two days to rehearse with Robin.

After that festival slot, would you consider playing any festivals next year?

Dan: We can go out and do our own headline tour at low level, but the main aim of this band is to get out in front of people who havent seen or heard us before.

Toby: It's no good preaching to the converted is it?

Dan: I think we will do well at festivals, we really do suit a bigger stage.

Where did the title for your debut album 'Silverspoons and Broken Bones' come from?

Dan: Toby came up with that...

Toby: I made it up out of words I found in the air (laughing) It was just a nice phrase that came to mind. Then I sort of thought of a meaning to them, 'Silverspoons' is the perception of the big glitzy thing that people think being a rock band is, whereas 'broken bones' is the truth underneath that, the reality of that, revealing the gritty truth, there's a lot of honesty on the record. 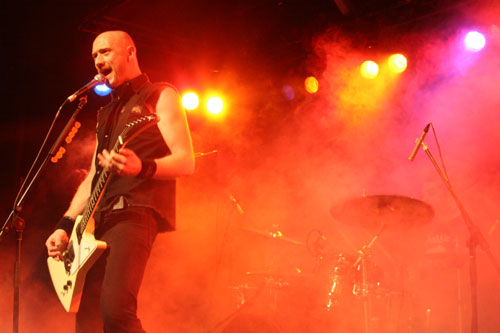 'Silverspoons and Broken Bones' has a lot of sounds similar to the legendary bands such as Metallica and Megadeth to name a few, was it your intention to sound like these bands? Did you want to create a more rocky, darker sound than your previous band?

Dan: It's a different writing process, we all write together, the resulting sound of that is your band sound, and so the people in this band listen to heavier stuff really, so I think that's where it comes from, if someone's playing a riff and someone's goes that sounds great, we will work with it. It wasn't a conscience decision. It was enjoyable to get really heavy as it wasn't something I had a chance to do with my previous band.

Robin: Its just a natural sound, it like the equivalent of shaping a balloon, when you blow a balloon up it becomes the shape it is, you cant look at it an d try to put an extra bulge in, you just cant do it.

'Silverspoons and Broken Bones' doesn't seem to have been given much exposure, why is that?

Robin: Its still early days yet, don't forget its not been a major release from a major label, there's been no massive campaign, everyone is geared up to the idea that next summer everyone will start to warm to the album.

Even though the album will be a year old, that's irrelevant, your album could be two years old before anyone really cares about it, If it was the second album we would be dead in the water by now, but because its our first album people haven't gone "I've heard that and I don't like it", they simply just haven't heard it.

So the fact that we've got this tour and Black Stone Cherry tour, the two best tours this quarter, and we are on both of them means we get exposure that we haven't had before. So by next summer we should be playing T in The Park, Leeds, Reading etc, and that's when the album should land, and we will probably release 'Burning Witch' again.

Toby: So far it appears people would quite like to listen to us.

Dan: It's a new band, people can talk about previous bands we've been in.

Dan: It's so different we have to find our fans, we expected it to be a journey, but you know we are happy with the way its going to be honest, I think people would have been really dismissive if we came out using our previous bands sound.

Toby: Look who we used to be (in a sarcastic tone)

Robin: It's a longer path, but it validates you a lot more, if you play to people, and your exposure is universally accepted as great, that's exactly our we prefer to work it, In my old band (Bush) we started at 240 in the American charts and worked our way to the top ten over a year, working and working, it didn't matter how old the album was.

eGigs would like to thank Robin, Dan, and Toby from the Stone Gods for their precious time just before going on stage. 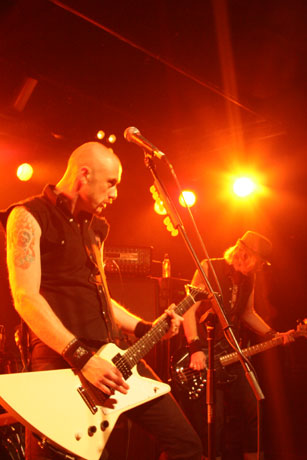