Lured by the happy hour signs of a Mexican bar for a pre-gig slurp, we entered a place that normally you'd never hear about in a gig review. This wasn't part of tonight's plan but our unscheduled stop was worthy of mention for two reasons.

Firstly the margaritas were lush, and secondly because there was a 2 piece acoustic playing. We settled down and were expecting to be bored rigid by some cheesy covers. Oh no, not this band. The songs were all covers, but they were an eclectic (and in places down right weird), selection from the 90's right up to present day. The songs blended into one another in a way that would make a highly skilled DJ proud (and not all seemingly lending themselves to this kind of treatment). The band was Adelphi Rhode and the bar was called La Perla. The skills of the duo were in their bravery, humour and adaptability rather than musicianship (although both were pretty accomplished guitar players). 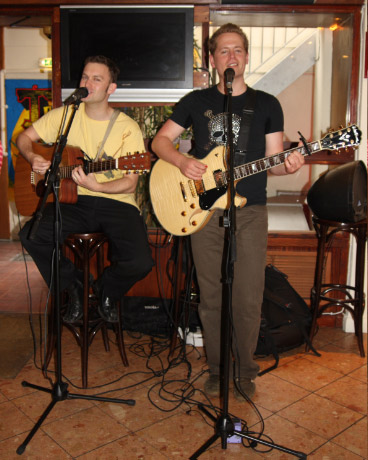 The tracks selected were perfect for a post-work wind down and got us both grinning. A selection of their works for the evening include the theme to the Gummi Bears, Snow  Informer, Snap  Rhythm is a Dancer, Arctic Monkeys  Bet you Look Good on the Dance Floor, Stereo MC's  Connected, Theme from the Fresh Prince, some Bob Marley and a couple of Wonderstuff tracks  all delivered in a cheerful, acoustic Jive-Bunny-esque style.

Realising that we'd better hit the road, we made our way on to ULU  University of London's Union. The 800 capacity venue boasts Ricky Gervais as a former events manager and has a well laid out separate bar and main hall. My only complaint about the place was that the gents' toilets were located downstairs and along a corridor  not problematic enough to ruin a night, just a tad inconvenient with a belly full of beer.

The night's entertainment  arranged by Rockers Revolt  was called the Reggae for the People Tour and we arrived shortly after The Pietasters appeared on stage. The Washington DC based band has backed James Brown and their class and 17 years in the business shone out. Rather than a reggae or dub, they whipped out a really soulful ska sound. They reminded me of Mighty Mighty Bosstones crossed with Toots and the Maytals (a fine fusion but not an undeserved comparison). For a while, I wondered who the keyboard player Jon Darby  reminded me of. I settled on a cross between Phil Jupitus and one of the guys from the 118 advert. His skills on the keys were more than enough to take my mind off his appearance, and together with Trombone player Jeremy Roberts, the crowd around me crumbled into insignificance as I was carried away on waves of smooth and funky ska. It had been a while since I'd been to a ska gig and I'd forgotten just how much energy you need to dance and do justice to the music. 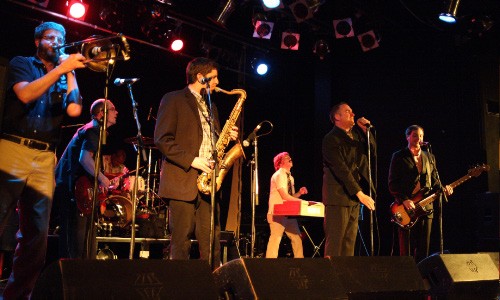 Going for a breather and settling back at the bar, the view was still good and the sounds carried well throughout the venue. All too soon, the Pietasters left the stage and their melt in the ears sounds were replaced by the bubble of excited conversation.

I didn't know very much about The Slackers and as soon as they hit the stage, I felt like the only one who wasn't completely familiar with them. They obviously have a massive following and I knew immediately that I'd been missing out. Again I felt the pace getting frantic but this time, thoughts of leaving the dance floor are squashed by the barrage  track after track of well rehearsed yet raw energy. 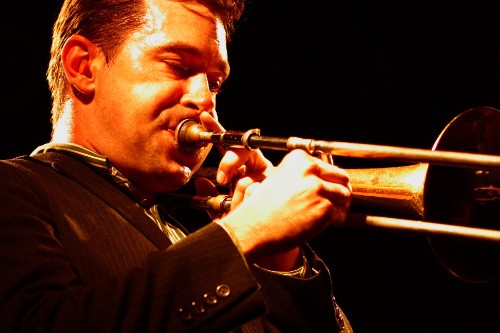 The more rocksteady feel of 'Bin waitin' really gets everyone skanking and the sax solo by Dave Hillyard left me breathless and in awe. His musical relationship with Glen Pine on trombone was really tight and as well polished as their brass. Vic Ruggiero has an amazing voice and was able to combine the gruff upbeat parts with the slower bouncy yet more down tempo sections. 'Propaganda' was another crowd favourite and helped with the realisation that I have to go and seek out more by The Slackers. Bass player Marcus Geard plays either a stick bass or a standard bass played in the double bass position and along with Ara Babajian on drums, they were responsible for legs continuing to skip into the night. 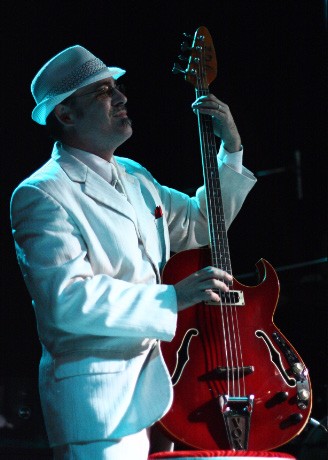 Finishing their set with a cover of 'Cupid Draw Back Your Bow', we were all left wanting more. In fact, I noticed the crowd thinning out and some didn't return. Their night was over and they were already happy with their lot.

Not so for us. We were waiting for Pama International. As we were waiting I noticed how well turned out the audience was. A few pork pie hats, many funky suits and more two tone than a chess tournament. It's not just the bands who have made an effort to look good. 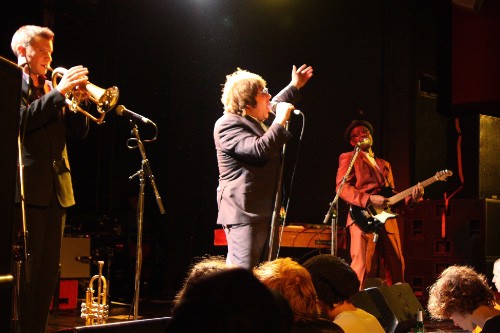 We didn't have to wait for long before Pama International joined us for the evening's final exertions. Their welcome was amazing and it seems only fitting for these stars. Their line-up was one of the things that drew me to the gig. The band who were put toghether by keyboard player Sean Flowerdew and vocalist Finny (both from The Loafers) also contained Fuzz Townshend who plays drums and was formerly a member of Pop Will Eat Itself and Bentley Rhythm Ace). Lynval Golding who was in The Specials and Fun Boy Three, and his godson Mike was on Bass, and with them was Garry Aylesbrook - who has also toured with the Scissor Sisters, Super Furry Animals and many more. A star studded cast and their quality shone through. You'd think after a night filled with ska, we'd have been ready to leave. Not a bit of it. Fuzz on drums blasted his way through and ensured that we didn't rest for a second.

Finny's voice really belted out their well written lyrics and as well as being powerful, he showed a much more soulful side. It showed a rasping edge and felt reminiscent of The Commitments. The crowd really got behind them after 'Wonder Wonder' and 'Second Chance'. To be honest, I lost myself in there for some time. It was like some musically induced trip to the ska side. These guys really do know how to put together a good show. 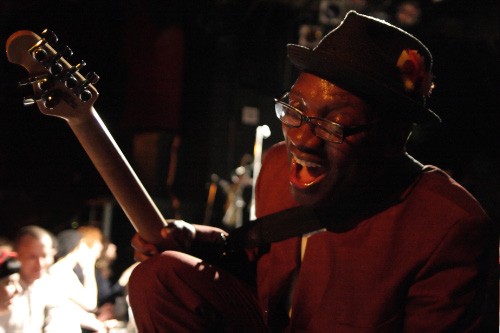 Sean's keyboard and orchestration skills pulled everything together brilliantly, and Lynval Golding added the right amount of chaos to make this a great night out. The evening and my life felt complete when as an encore, they played 'A Message To You Rudy'. It was a late finish and we had to use the little remaining energy to run for the last train home, but it was worth the blisters! Pama International felt like the kind of band who would be best enjoyed in the open air of a festival. Fingers crossed for a dry Beautiful Days this year.