Funeral For A Friend / Flood Of Red / Twin Atlantic

After a good four days of feeling ill, dizziness, headaches and other mystery bug symptoms I was unsure whether going to a gig was the best option. How on earth could a visit to this show ease a pounding sore head?! But what can I say; I am a glutton for punishment so I took the decision to give them a chance. So all white faced and meek rather than bright eyed and bushy tailed I made my way to the infamous Tuts.

I managed to make it in on time to see the support acts, which is no doubt due to my lack of alcohol consumption beforehand. This may be one time I was happy about feeling below par. First on were a 4 piece from Glasgow called Twin Atlantic. I knew nothing of them prior to this show, but I will certainly keep an eye on them. They released EP 'A Guidance From Colour' in January and rattled through songs from it much to the delight of the crowd. Playing to a packed house, at only 8.30, must have been a treat and the fans lapped it up. Front man Sam McTrusty ended their wild set by defying the rules listed above the stage to crowdsurf his way through the last lyrics. It was a sight to behold and he done well to maintain his vocals.

Late call up Flood Of Red were second on stage and considering they were only asked to perform the day before the show, and were a guitarist down, you would never have guessed had they not mentioned it. The normal 6 piece, for this evening 5 piece, took advantage of the hungry crowd to plug their band and after numerous 'thank you's and a good set I am sure the plugging will have paid off.

Both bands are worth a visit if you get the chance and I am sure they are on their way to well deserved praises from those who do just that.

Finally though it was time for the band we had been waiting on. Prior to them arriving on stage I was beginning to wilt. This being the first time I had been awake past 10pm in days! Could Funeral For A Friend actually do what seemed impossible and keep me awake?

The rest of the crowd were undoubtedly up for this and the anticipation was almost tangible in the tiny venue. Fans had waited patiently for this night but their infectious and giddy excitement soon had me feeling like a kid on Christmas Eve.

They arrived on stage to 'We Are The Champions' and instantly I was awake as the screams reverberated around me. They ran through first song 'This Year's Most Open Heartbreak' and the die hard fans that follow the 5 piece erupted into rapturous applause. Thankfully I was standing up by the sound and lighting desk and under the air con as I may have relinquished my hardcore gig goer stance and keeled over! 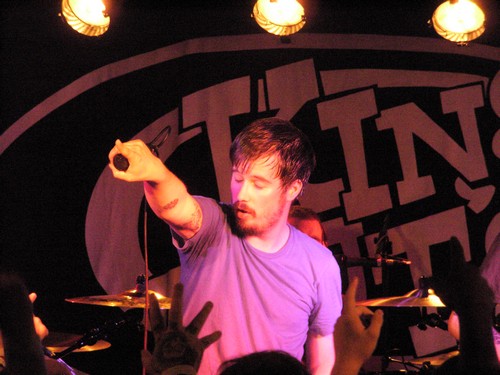 New song 'Waterfront Dance Club' was an instant highlight. This will be a double A side along with 'Beneath The Burning Tree' and will be available as a free download on July 14th. Generous to a fault these guys and it's well worth the effort of trawling online to the bands website to pick this up. A taster to their forthcoming album, we now know will be named 'Memory & Humanity', we were all eager to hear what they could do. This is the first album since they cut loose and set up their own record label  Join Us Records, and it bodes well for the future of said label.

The rapport they build with their eager fanbase is evident and they banter their way through in between songs. Lead singer Matt Davies dedicates a song to those who have been there since day one. Then retracts it and decides instead to honour those who 'only a day late' have been there since day two. With both the music and crowd interaction so entertaining I couldn't help but forget my delicate state.

As the ever enigmatic Davies jumped from one end of the stage to the other (not a huge stage to be honest, but a good effort all the same!) the band continued enthralling the masses with songs old and new, 'Juneau', 'Streetcar' and the great new 'You Can't See The Forest For The Wolves'. Taking time in between to throw water on the crowd, I am sure some at the front may have needed it!

However all good things must come to an end and this one did. With no encore, they had played for an hour and fifteen minutes almost solid, the band left after final song 'Escape Artists Never Die'. There was unadulterated gratification on the faces of those loyal fans and some loitered in the hope of 'one more tune'. It wasn't to be and the venue emptied leaving all wanting more. We wont have long to wait.

The boys are coming back in October with a tour to coincide the release of their album and I will definitely go along again to enjoy their show with no hang ups! They might not have cured my headache but I certainly forgot my bug for a night.

This Year's Most Open Heartbreak
Roses For The Dead
Waterfront Danceclub
She Drove Me To Daytime TV
Recovery
Juneau
Out Of Reach
10:45 Amsterdam Conversations
History / Your Revolution
Wolves
Into Oblivion (Reunion)
Storytelling
Beneath The Burning Tree
Streetcar
Escape Artists Never Die 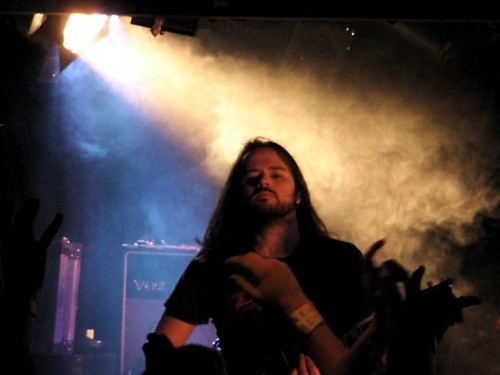