Holey cow! Country punk from the guys who invented it are hitting the capitol in a one off gig; this has gotta be good! As soon as I heard, I rushed out to buy tickets and prepare myself to travel 250 miles for just one show, such is their influence on me.

And it is not just me; apart from the well known collaboration on a certain band's MTV Unplugged session that introduced a world to their brand of psychedelic punk, many a famous fan have heralded the band the Meat Puppets. Tonight us mere common fans finally get to see the brothers Kirkwood and new drummer Ted Marcus (Luxury, Liz Skillman Group) perform an unforgettable set.

First up are some credible sets by Wooden Shjips and Howlin Rain. Both are the sort of bands that would not get near any popular chart of today, but are so impressive they deserve another listen.

Wooden Shjips have a jam of a set, with hushed vocals over whirling guitar echoes and keyboard layerings, completed with steady bass and drums. Think of The Doors but without a Morrison in the lead and you're not far off. The delay and reverb surround you, and the fuzz on the guitar and keys takes you back to the early grunge days of Mudhoney, and reminds you that people who like that era are indeed carrying the torch for it. 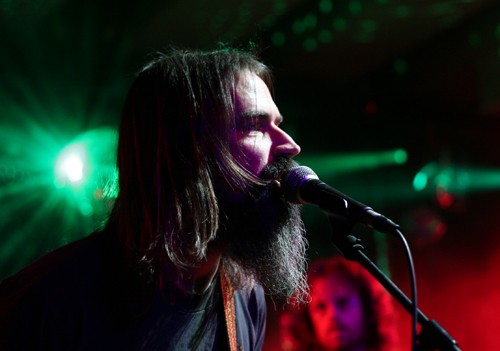 The added trumpet playing by the bassist gives an eerie feel to one particular song, and the part sang/part softly spoken vocals finish it off nicely. I hope to hear more from these in the future.

Howlin Rain are also fans of the jam, but they have a more seventies rock to their sound. Guitarist and singer Ethan Miller (from the excellent Comets on Fire) gives it his all, putting every once of energy into producing astounding rock vocals and bluesy guitar solos. 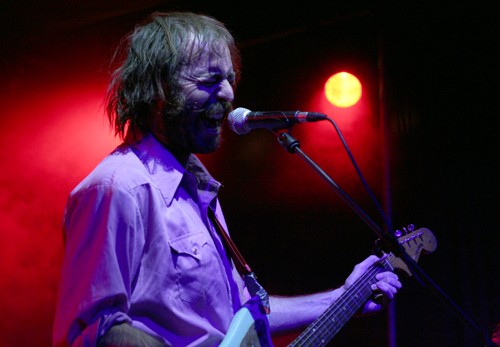 To say that their name comes from an experience in a storm-hit cabin in the depths of Winter on the Eel River tells you that this is an experience to be part of. Named as one of 'The New Weird America', which embodies folk, psychedelia, and 'free formed existentialism', if you like your jam sessions then I seriously recommend Howlin Rain.

Finally, time for the Meat Puppets is nearly upon us. Having been on hiatus since bassist Cris Kirkwood's troubles with, well, shall we say all the dark sides of rock and roll, this is a much anticipated and welcomed return to the music world for some of Texas' finest. Singer/guitarist Curt Kirkwood looks pleased to have his brother yet again buy his side, jamming with him proudly.

Though only slightly older, Curt looks so much younger that Cris, a shock reminder to those about a life of excess (unless you're Iggy Pop, whereas I don't know what's happening there with that energiser bunny). Like Iggy though, Cris does not stand still for any part of the show, and bounds about the stage playing slap bass to such a high quality; the modest musician surely is an inspiration. 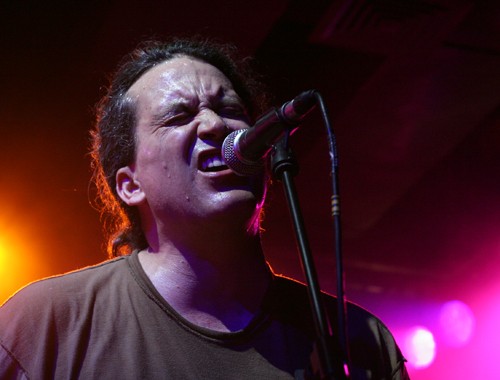 Curt, the staple part of the Meat Puppets, shows off such guitar playing skills I find it hard to see how anyone can not be a fan. At one point he and Cris take to slapping the guitars, with Marcus keeping the beat. There's plenty of jamming throughout the set, and the music is none stop from start to finish. For a band twenty-eight years young and with the members nearing their Fifties their looks to be no stopping them.

Highlights of the set are the obvious ones from II ('Lake Of Fire', 'Plateau', 'Oh Me') along with 'Too High To Die', 'Backwater', 'Up On the Sun', 'Comin' Down', 'Never To Be Found', 'Severed Goddess Hand', 'Station'. They tend to stay away from the ferocious first albums of hardcore tracks and more on the 'cowpunk' tracks, much to everyone's joy. A personal favourite for me is the best tune to get lost to, the country ramble of 'Lost', which I had nearly given up hope for before it was shoved into the encore.

The atmosphere was great; my first visit to the Scala shows it attracts such polite and friendly fans, the only problem is the amount of steps everywhere! I just have to mention the guy who jumped onstage during the encore to strut his stuff with Cris and then proceed to bellyflop into the crowd, who had long since moved out of his way (hope you're ok, you made my night); and to the obviously star struck guy at the back dancing with the balcony barrier; hope you had a special night! 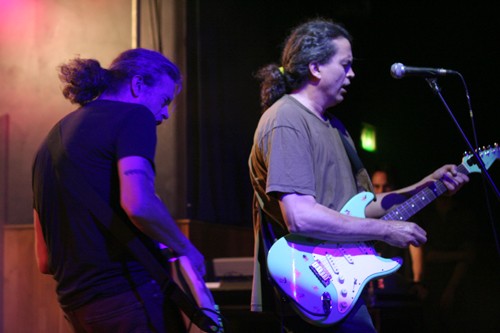