I was greeted with an air of youthful energy and a sticky carpet. The venue felt cosy and there were groups of people sat down dotted about. The audience didn't scream 'Indie' of which I thought it would, the age group had a good mix. Yes there was a plethora of skinny jeaned teens supporting tiny white trainers, but definitely a few in their forties.

What I like about the Brixton Academy, recently re  branded the Carling Academy Brixton, is how intimate the venue is, despite its capacity of 4000 odd. It still has its historical proscenium arch and Art Deco interior.

As I imagined The Kooks' opening track was their first released 'Always where I need to be' from their second album. The crowd surged forward and it didn't take long for a small mosh pit to materialize especially when the poptastic chorus "do-do-do, do-do-do" kicked in. 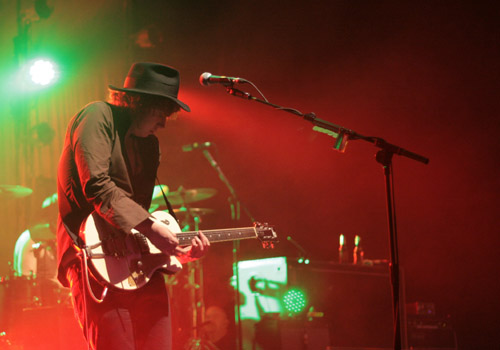 The speakers at both sides of the stage towered over lead guitarist Hugh Harris and bassist Max Rafferty, who was supporting a Mr. Grumpy Tshirt. Harris looked spectacularly pretentious in a waistcoat and trilby, but why wouldn't you dress like that when you can bang out solos like he can. Yes you are that good.

The first track was followed by 'Matchbox', keeping the crowd bouncing, shortly followed by 'Ooh la'. There was an even mix of songs between the two albums throughout.

Prichard's voice was, as expected, effortless, yet faultless. His charismatic make-up drew in the crowd, who revelled in his hand - claps, hollers, yelps and hyperactive travel across the stage. The band rolled out new songs 'Sway' and 'Shine on' which mirror the charm brought to us before in the form of 'Naive' and 'She Moves In Her Own Way'.

The intro for 'Naive' kicked in a quarter of the way through and everyone went wild. I was sufficiently sweaty at this point. It was fantastic. I was standing (or dancing erratically should I say) slightly to the outside right of the sardine-esque crowd at the very front, but it was perfect as the floor of the venue slopes forward so you can see from pretty much anywhere. There was a sea of arms holding up cameras and mobile phones. 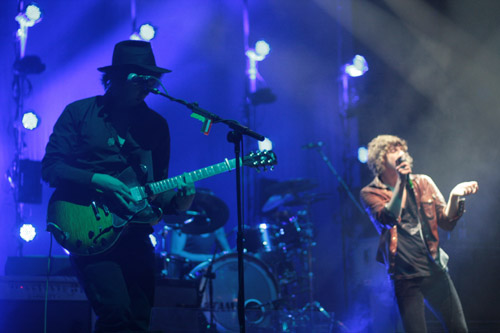 In the corner of my eyes I could see plastic cups of beer being thrown into the air showering everyone. I felt the upshot of that a couple of times but it was all in good spirit.

The interaction between Pritchard himself and the audience though was minimal. Not much banter, which is what you normally expect at a gig. Not even a 'Thank you Brixton' as we would maybe expect as fans who support them as much as everyone in here clearly does. There were short introductions to following songs but not much else. Mind you, he neednt bother, the audience is putty in his hands either way.

The atmosphere was buzzing. It was loud but friendly. With the occasional crowd surfing attempt. A few limp bodies were plucked out from the front barrier by security and fans were squirted with water to keep cool. 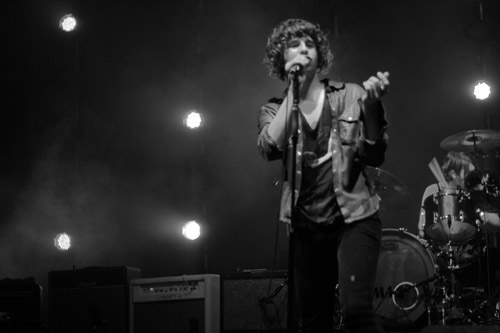 They played for approximately an hour and a half and I wondered what they'd play as their encore. After a minute or so Luke appeared alone with a guitar. "Couldn't leave without saying goodbye now could I?" he muttered. With one stroke of the chord Dm everyone knew it was the melodious 'Do you want to go to the seaside'. He needn't have troubled himself singing as the crowd were singing as loud as he was.

He was soon followed by the rest of the band and proceeded to deliver an immaculate performance of 'Sofa Song', which sent everyone into a frenzy. Half way through, Pritchard launched himself into the front of the audience, with security on tight hold of his belt buckle. The more fans tugged at him the louder he sang.
article by: Mia Hague
photos by: Lucy Ridges
published: 08/05/2008 14:55