With the release of second album 'Love, Ire and Song' Frank Turner has proven that the addictive quality of the punk tinged folk of the first disc wasn't simply a happy accident, and that there is still plenty of mileage in Turner's seemingly never ending crusade against mediocrity, apathy and boredom. Whilst on record Frank Turner is good, live is where he really excels, whether that be alone with his guitar, or like tonight, accompanied by a full band. This evening he is as great as ever, and to see a crowd of hardcore kids shouting along to folk songs is, as always, a sight to behold.

Turner launches into his hour-and-a bit long set with second album opener 'I Knew Prufrock Before He Got Famous', a textbook piece of songwriting which examines the dynamics of friendship, and the constant pressure to make something of yourself. It is a song which cannot help but raise the neck-hairs, as it would be impossible not to find something to relate to within Turner's simple yet expertly crafted lyrics. The crucial moment when we reach the high point of the song. As Turner sings "Life is about love, last minutes and lost feelings" The Cluny crowd joins in, and manages to drown out, just for a second, the band themselves. Most bands can't manage this kind of atmosphere in a whole gig, yet this band have done it during the first song.

Older material sits comfortably amongst new throughout the set, with favourites such as 'The Real Damage', 'Back In The Day' and the fantastic ode to misplaced optimism which is 'Once We Were Anarchists' all being greeted with huge receptions from the Newcastle faithful, and when even old b-side 'Nashville Tennessee' gets a singalong, you know you are onto a winner.

Possibly surprisingly, and testament to how well received the new material has been, the highlight of the set is current single 'Photosynthesis'. Turner's trademark cynicism is present here in all its glory, and you almost sense that after hearing it delivered with so much power everyone inside the venue is going to go into the office tomorrow just to quit their job, determined to make more of life. If ever a song could make you feel free, it is this one - its message of living life to its fullest is difficult to ignore. 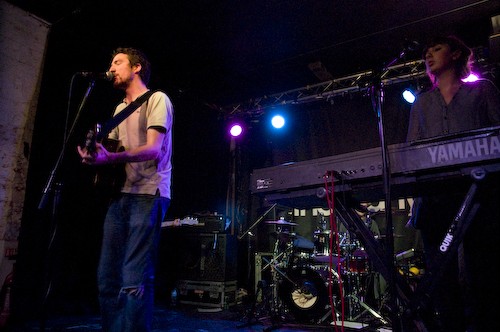 Given the preaching nature of much of his music, it would be easy to dislike Frank Turner, and the only reason that this doesn't happen is because he is so genuine, and so clearly believes in what he does. This transfers to the music, and gives it a quality which feels more like a battle plan than hectoring, drawing the listener in until they can't help but enjoy themselves, and feel part of something special.

With a touching dedication to an old friend, Turner launches into 'Long Live The Queen', one of the few songs with the power to make your usually staid and reserved reviewer reach for the tissues. It once again showcases the breadth of talent on show. Few artists could write a song about a good friend dying, imbue it with such heartache and sorrow, and yet still make it feel like a celebration. Key lyric "You'll live to dance another day, just now you'll have to dance for two of us" again shows Turner's ability to drop in a killer line just when it is needed, and may well be the best epitaph ever written. 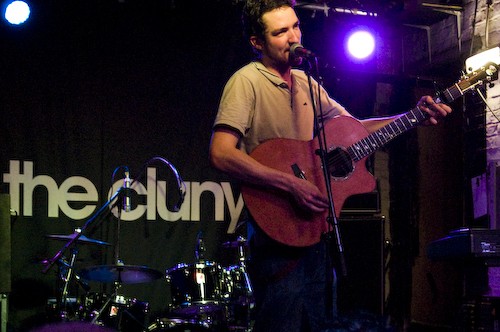 Frank Turner has made a habit of closing his sets with 'The Ballad Of Me And My Friends', and tonight is no different. The song has the power to unite an audience, and raise the atmosphere a notch or two. It is just a shame then, that when it is finished and the crowd are on a high and baying for more, Turner refuses to indulge in the often crass but tonight deserved ritual of the encore. Leaving the stage to rapturous applause, Turner makes a b-line to the back of the venue to start work again - this time selling his own T-shirts.
article by: Tommy Jackson
photos by: Tommy Jackson
published: 04/04/2008 12:26