Slow Club aren't what you usually expect from a Sheffield band. The wit in the lyrics is there but here a quirky folky-pop sound is going on as opposed to the synth-pop or indie-rock typically delivered from The Steel City. Arriving on stage, looking like a cross between The Ting Tings and X-Factor's Same Difference, old school friends Charles and Rebecca seem like a very friendly and, perhaps, twee band but there's no cheese here, in fact Slow Club are reminiscent of The White Stripes during some of their more poppier moments.

It could be awful, during 'Me And You', the band's second single released late last year, Rebecca uses a wooden chair as a percussion instrument, but it doesn't come across as a gimmick and fits the song perfectly with its rockabilly sound and sing-a-long chorus. Charles sticks to the acoustic guitar as Rebecca often leaves it just to a single snare drum but both share vocal duties and the front of the stage. 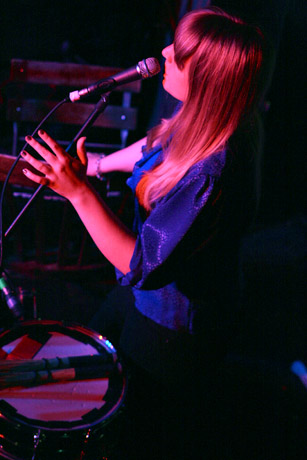 New song 'Trophy Room', complete with a pounding beat, was one of the best received by an appreciative crowd but 'Because We're Dead' was interrupted by a minor explosion of an amp. Charles told us "We were rocking so hard we caused a small earthquake somewhere else in the world."

Before the closing song 'Apples And Pairs' Rebecca thanked the audience for making their epic journey from the previous nights gig in Leeds worth their while, however, with a debut album expected this summer Slow Club could be just at the start of another, more exciting, epic journey.

The Duke Spirit, on the other hand, has recently released their second album 'Neptune' of which makes up a majority of tonight's set list. Kicking off with 'Send A Little Love Token' the band start as they mean to go on, at a frantic pace. Front-woman Liela Moss struts about confidently onstage looking like a young Debbie Harry with the face of Nina Persson but sounding more like a mixture of Polly Jean Harvey and Melissa Auf der Maur, and shes well backed up with powerful guitar duo Luke Ford and Dan Higgins, Toby Butler on bass guitar and Olly 'The Kid' Betts on drums. 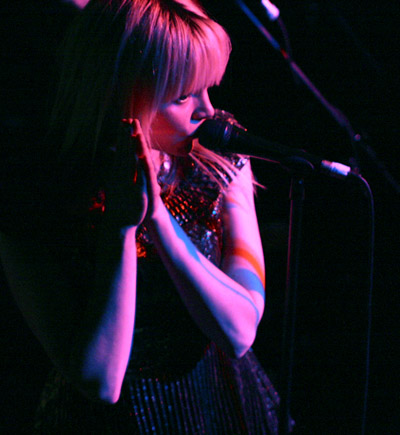 Nine songs from 'Neptune' get an airing tonight, along with four from debut album 'Cuts Across The Land' but it is the new songs that really suggest that The Duke Spirit could have a huge future, they sound a lot tighter and less meandering than the previous album. It feels as if The Duke Spirit has found a sound that suits them and can now really push forward using the obvious attention that the enigmatic Moss will receive as leverage for success.

Highlights tonight include a rocking 'Lassoo', a dirty rendition of 'The Step And The Walk' and an energetic 'Into The Fold' but it's 'This Ship Was Built To Last' that seems to bring the most out of the band with Moss ending the song on the floor in rapture.

There's not a great deal of interaction with the crowd, only Moss herself speaks, but that's not what people are here for. Apart from a few members of the audience, that seem to be content in watching Moss through the eyes of their mobile phone, most people are here to hear some good old fashioned rock music, and when Moss brings out the harmonica that's what we all get. 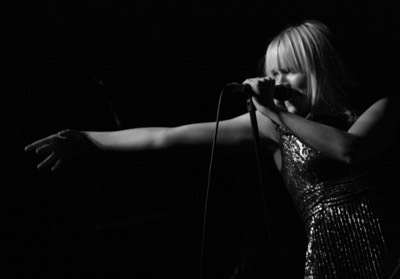 The Duke Spirit have spent a great deal of time over the last couple of years touring and building a big fan base in the US, and their sound is definitely one that would appeal to an American taste with nods towards Pixies and Sonic Youth, but their homeland is warming to them and one lucky break, be it a successful year on the festival circuit or a well placed song in an advert or TV show The Duke Spirit could yet be a force to be reckoned with in British Rock.

The Duke Spirit set list:
Send A Little Love Token
Lassoo
Dog Roses
Sovereign
Lion Rip
The Step And The Walk
My Sunken Treasure
Into The Fold
This Ship Was Built To Last
Red Weather
Love Is An Unfamiliar Name
Encore:
Neptunes Call
Cuts Across The Land