This is the last of a 4-date mini-tour in celebration of The Levellers' 20th anniversary. Four acts are to play, with handovers of the stage presumably very well planned in advance.

It is well known that 3 Daft Monkeys are to play a short opening set, however whether the majority of punters wanting to see them knew about a start just ten minutes after doors opening was debatable. Nonetheless, their set finds the vast academy floor half-filled with appreciative types, and plenty of people jigging to their music down the front. The band look suitably appreciative of the generous turnout, albeit they must be getting used to healthier turn-ups for their mix of acoustic guitar, bass and fiddle if last year's festival turn-outs are to be gone by.

A greatest hits set is played. That means firm favourites of 'Hubbadilla', 'Astral Eyes', and 'Social Vertigo' with its distinctive band-&-crowd swaying interludes. It all comes across very fine, but a little strange so early in the evening. They end with 'Faces' for more energetic early-doors dancing, and then make way to let the bigger guns have their shots.

Alabama 3 (acoustic) are most suavely dressed, in a prominent mixture of white suits, Stetsons, and shades. The four of them sit in a line of stools at the front of the stage. They have initial technical problems with the acoustic guitar's electrics, but we are serenaded instead to an impromptu acapella that is pulled off very well.

They have around six songs once the guitar joins in. Music is otherwise all vocals with occasional mouth-organ. They have enough verve to pull things off, from the initial 'Woke Up This Morning' onwards. 'U don't dance 2 tekno anymore' still has its rousing chorus and hip-shaking ability, and 'Up Above My Head' also raises spirits admirably. References to the local neighbourhood are dropped regularly, it being their locale, and crowd interaction is regularly encouraged with for instance police siren 'woo-woos'. The only quibble is that the guitar lines tend to be quite simple, which however could be argued as providing solid backing to the three vocalists. 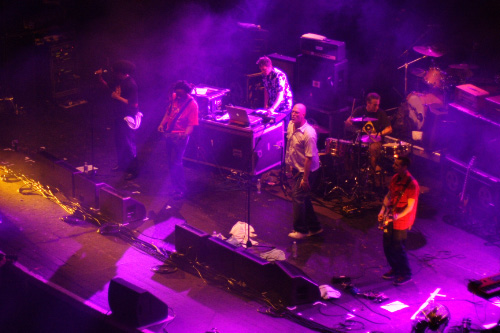 The many-populated Dreadzone come on stage, kick-off with 'Elevate', and the crowd down the front return to the ways of lively dancing and bouncing. With the charming MC Spee alternating singing, comparing, and robot-acting duties, there's an excellent flow to the music. Many a time we are smoothly encouraged to join in, for instance a chorus here, an "ahoy" there for 'Captain Dread', and some interlude back-and-forth takes on "When I say Dread, you say Zone..." It is standard fare for this accomplished act and familiar audience-members, but it never fails to hit the spot.

We are treated to the familiar, with 'Zion Youth' and 'Little Britain' from their early career, and their version of 'Iron Shirt' that lasts a fantastically lengthy time. In contrast, we also get three new songs that are all feet-movers although none break the mould. Must be a new album coming, theres not even space for last year's newest single. But after three quarters of an hour, and just one appearance of Greg Dread the drummer down the front of the stage with his sticks aloft, the act that has my heart has to leave, to allow the headliners to have their rightful slot.

In contrast to the packed dancehall for Dreadzone down the front, when The Levellers come on a mosh-pit of sorts emerges and Brixton's crowd barriers come into their own. I hang in there, easily separated from my group, for the early outings of 'Battle of the Beanfield' and a few other upbeat numbers, then make a slow retreat through what must be a sell-out crowd in terms of how densely-packed the whole arena now is. 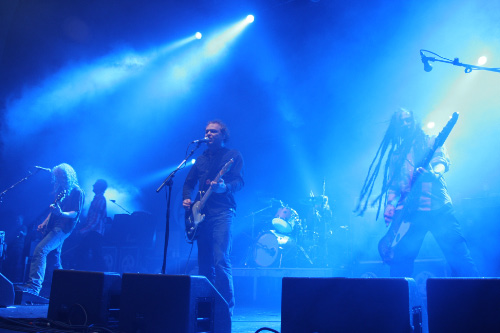 The Levellers are great to look at. Four string-instrumentalists step back and forth on the stage to varying degrees, most prominently their hugely-red-dreadlocked bassist. They are backed with a significant and effective light show. They still have a fulsome guitar sound with prominent fiddle overtones. The tunes are packed into a set that they could have easily lengthened thricefold. Obvious sing-a-longs like 'Riverflow' and 'Beautiful Day' are mixed well with relatively less-well-known ones like new double-a single 'Cholera Well'. The latter nonetheless holds its own and could easily be misplaced as an old album track to these ears.

At one stage a striking half-dressed fellow comes onstage with one the biggest didgeridoos I have seen. Better still, he holds it up to the skies throughout, and it adds a subtle swirl to proceedings for five minutes, especially during 'One Way'. 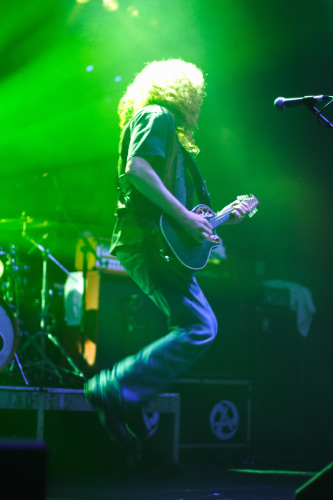 After a quick-fire hour, we are treated to two encores. The first is the excuse to bring in a brass section stage left, adding to tracks like 'Warning' and 'Dog Train', tunes I later find are seldom aired publicly. The second encore starts with a fiery rendition of 'Liberty Song'. Then 3 Daft Monkeys re-emerge for the finale, a duelling fiddle-off of 'What You Know' with added tambourine and tin-whistle.

Finally it has to end. The hardened and foolhardy go on to an official Levellers' aftershow at Brixton Jamm, and all of us proceed on our ways with tunes in our heads, ringing in our ears, and smiles on our faces, at least as far as I could tell. Here's to the 30th...

The Levellers have just released a free double a-side on download only, available via www.lettersfromtheunderground.com until the end of March.
article by: Clive Hoadley
photos by: Andy Pitt
published: 14/03/2008 10:29