Oh No! Oh My! hail from Austin, Texas and have been over to the UK to perform a short tour promoting their E.P. released towards the end of 2007 'Between The Devil And The Sea'. A small crowd gathered at the Bristol Thekla on Wednesday night to catch the four-piece before they head back to their homeland for a series of shows for the SXSW festival.

Local band The Lauras were the only support act and the crowd, clearly bolstered by family and friends, seemed to enjoy their sub-standard post-Libertines indie rock. In reality the musically solid performance was let down by some weak vocals from the lead singer and they came across as a poor copy of the aforementioned The Libertines but with added (and probably unnecessary) trumpet. That said, the band were clearly very young and did have talent so maybe we'll see better things from them in future performances.

After a short break Oh No! Oh My! shuffled onto stage without most of the audience noticing. Opening up with an electro-pop beat, reminiscent of Sparks, first song 'I Love You All The Time' soon transformed into a joyous burst of guitar-driven indie pop with quirky one-liner lyrics like "...I love you all the time, except when you drink wine..." 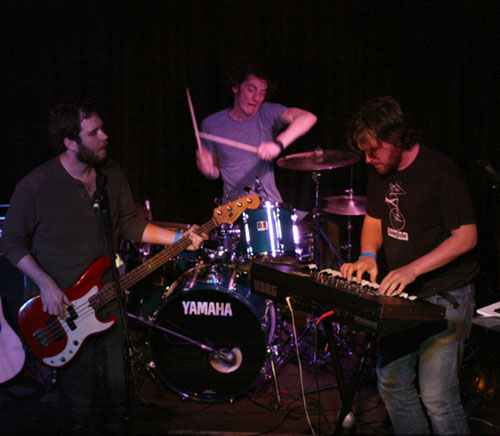 Some of the bands obvious wit and humour on record were perhaps a little less clear when performed live but their idiosyncratic lyrics, akin to Belle & Sebastian, were delivered capably by lead singer Greg Barkley (also guitar/bass) covered with lush layers of harmonies provided by Daniel Hoxmeier (bass/guitar) and Tim Regan (keyboards/guitar). The band is completed with highly competent drummer Joel Calvin.

Together, in their current form, since 2004 Oh No! Oh My! have gathered a cult following through mp3 blogs and their ability to make listeners smile with their lively feel-good rays of musical sunshine and 'The Party Punch' was perfect evidence of this with a similar upbeat style to The Boy Least Likely To. Performed live 'Reeks And Seeks' is diverted away from being a Sesame Street ditty towards a funky two-minute jam, whilst 'Walk In The Park' keeps the heads nodding and the feet tapping with the "...ba da ba ba ba ba da ba..." chorus. 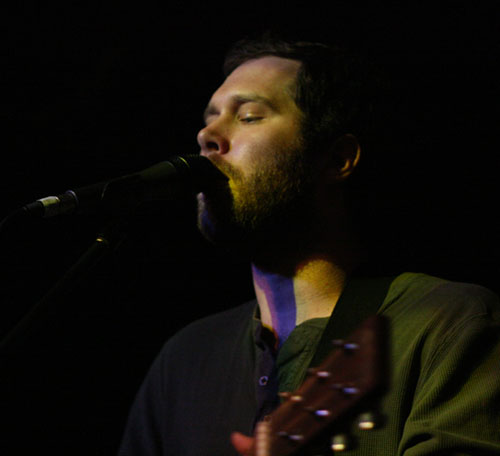 The depth of the sound is supplemented by Regan's keyboard producing flute sounds from the attached laptop, and generally there is no wasted space in any of their songs, any gaps filled with tambourines, hand claps or Barkley's vocals that tended to sound more and more like John Linnell of They Might Be Giants as the night progressed. Even more dark sounding songs like 'I Have No Sister' may start off with some sinister synth but soon melt into the familiar routine of acoustic guitar strumming and sweet melodies. A different side of the band was displayed with closing new song, introduced as 'Wham Bam Thank You Spaceman!' which had a much more psychedelic feel to it.

Whether or not Oh No! Oh My! can gain commercial success may rely on them continuing with low-key tours to build a stronger fan base. They certainly have the tunes that would be well received on the festival circuit but perhaps just need one lucky break to make it big. In 'Farewell To All My Friends' Barkley himself sings "...It's perfectly unclear, where I will be this time next year..." I hope, wherever they may be, they are deservedly performing to substantially bigger crowds.
article by: Richard Stevens
photos by: Sarah Stevens
published: 07/03/2008 13:20