Exeter University is boisterous when we arrive and there's still people streaming in. It's a packed crowd for the return of Newton Faulkner who last visited a year ago. Since then his debut record 'Hand Built By Robots' has topped the charts and he appears on the radio playlists daily, so no surprise he's generated so many people eager to see the dreadlocked troubadour.

First there's the support act, beautiful Australian siblings Angus and Julia Stone. Id read their songs were delicate and sparse. So was a bit shocked by the understated energy, of Julia reminiscent of Bjork and the nu-folk dynamic of the music, reminding me of Cortina Deluxe. Each song receives rapturous applause. Julia shows a huge diversity of instrumental skills, trumpet, piano, guitar are all exhibited in these eight songs. 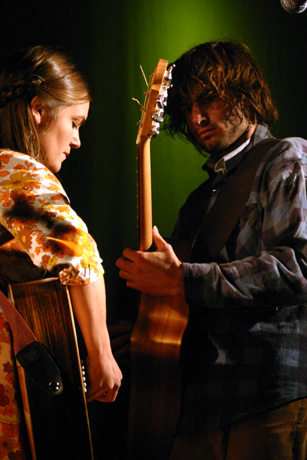 And what songs, this is a folk take on Cowboy Junkies stripped back simplicity. The hippie chic pair add gentle melodies on acoustic guitar or slide, harmonica and Julia's vocal is deep and breathy and almost psychotic in yearning. Far more powerful than the recordings on their myspace site suggest. 'What you wanted' is a stand out track.

'Loosh' is a song about Hollywood or what goes wrong once you've grown up and as it opens its clear these two have played music together for a very long time, they have a musical rapport between them and I'm just wondering whether they would work in a full band, when the pair are joined by drums and bass. 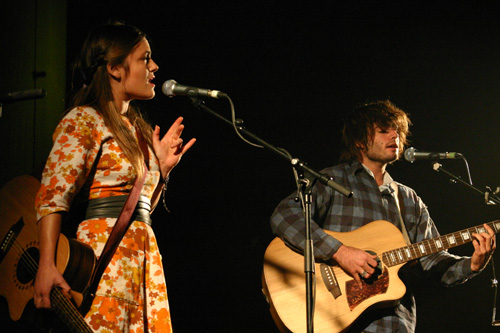 Suddenly they sound like Guillemots and theres a driving drum and bass rhythm. 'Private Lawns' shows their interest in lives more complicated than the simple dress Julia wears and the simple dances she makes.

The music is stirring and hidden within it comes something almost tribal, aboriginal perhaps, it's foot tapping and swirling with brother and sister singing as one voice.

'Here We Go Again' is the closing number, plucky, spinning folk, off kilter with harmonica and closes a fantastic set, if this pair do festivals they'll be as big as Newton in 12 months. This is reflective, endearing, raw and seductive. If you like Damien Rice I reckon you'd like these two, and as the summer unfurls I'm sure this duo's fame will too. Much like tonight's main act the effervescent Newton Faulkner. 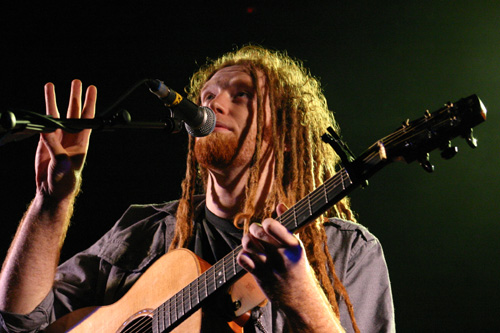 Not only a wonderful musician, but also a storyteller and a man with a sense of comedy, Newton is beginning to shine. Once the folk singer songwriter, dreadlocked, simple suit and guitar takes to the stage, he receives huge applause, and every guitar tap on 'To The Light' gets applause, the place is rammed to the rafters tonight, and the crowd are up for heckling with yells of 'Spongebob', chanting, cheering, clapping, singing and in the case of the girls around me, drooling or swooning along to Newton.

Stories of a younger Faulkner, submitting one song to guitar teacher and mentor, Eric Roach and a possible jazz plumber future, whether Angus and Julia could call themselves "The Stones", his new organ pipe foot peddles, formation band dancing on giant piano keyboards, his video exploits, touring by train, haircuts and wheelbarrows, Three Amigos, The Brit Awards (he wanted to escape out the toilet window), vikings with rabies, how long to leave for an encore, and Spongebob - all provide the entertainment between the songs, and ensures Newton puts smiles on faces and everyone goes home happy.

You don't stay on the radio all summer long without hits and Newton has an armoury full of them, however it's 'People Should Smile More' and his performance during it that suddenly makes me realise, we have a true British legend in the making. He's accepted he's destined for stardom and not that worried about it. Songs with basic truths, feel good tunes, charisma and dreadlocks, big gigs and a backing band to fill those sounds, and cross-generational appeal. 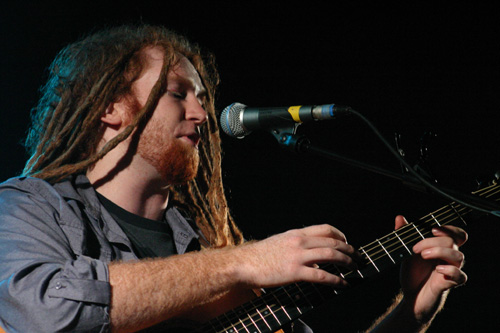 And it's the off the wall improv playing he does which wins everyone over, from 'Moon Shadows' to 'There's No Limits' to 'You Spin Me Right Round' to the monumental cover of 'Teardrop' which he says was also an improv and if he'd had time to think, he would never have played it. Now the rendition has a huge glitterball spilling windows of light, and a curtain of LEDs and looks like a Massive Attack gig.

Most of the lighting is subdued for the set up to now and 'Feels Like Home' ups it a notch with raspberry swirl lighting and includes a cleverly played live guitar fade out. 'For God's Sake' displays some real skills, vocal reverb, constant re-tuning strings, and syncopation on the guitar body - and boy is Newton talented.

There's guitar swaps aplenty during the set and we get a Kings Of Leon and a techno version of 'Dream Catch Me' as well as the sing along album version. Crowd participation continues with 'U.F.O'  point and wave. 'Gone in the Morning' closes the show and Newton wonders how long to leave it before coming back out.

Faulkner is a true performer, and with performances come crowd participation, were divided up into men and women to sing our own refrains, and everyone joins in to perform 'Billy' before Newton tips his head at stadium gigs, showing he's still stretching his skills with 'Bohemian Rhapsody' on an acoustic guitar, all parts of it including drums! And once weve picked our jaws off the floor we applaud, those seated in the gods are giving a standing ovation. 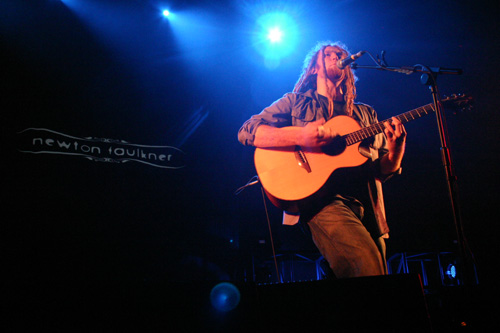 Probably this country's best acoustic guitarist, although clearly he wants to stop playing the oft shouted, 'Spongebob Squarepants' he showed us tonight how he'd sound with a 'proper' band, and it worked surprisingly well. It looks like Newton is moving into the big leagues, what next a full orchestra? Not bad for a bloke who looks like a busker and still shops in Morrisons. Fame it seems hasnt changed him but clearly demand to see him, much of this tour has sold out and the desire to play even bigger venues (or festivals) has changed the way he delivers his music.
article by: Scott Williams
photos by: Karen Williams
published: 27/02/2008 08:33