A local legend playing with one of his heroes? We must be in for a good night, when Jon Gomm is opening for Nick Harper; all in all acoustic guitar madness. 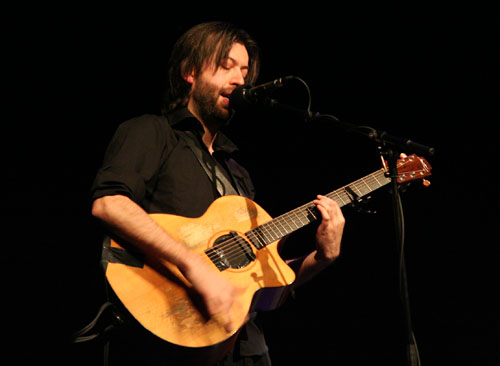 Jon Gomm stands dressed all in black against a black backdrop, with only his guitar (Wilma), a microphone and a few choice pedals to accompany him. He then manages to convert a whole crowd into fans with only a handful of songs on his tight venue-enforced schedule.

'Waterfall' starts off the set, and Gomm produces the sound of trickling water through his guitar with ease, mixing in a blur or tapping and plucking.

Tuning takes out a big chunk out of the set, but this gives Gomm a chance to bond with the audience, by telling a few jokes about his song origins. 'Gloria', a request from one clued-up crowd member, is about an ex-girlfriend of Gomm's from his days in Blackpool. "Gloria was a chav, and I was what you call emo, a forbidden mix!"

After the impressive 'Gloria', which is a true showcase of Gomm's vocal style; strong but not intrusive, whilst playing the guitar in a way many of us only dream about. 'Afterglow' "is about shagging!" we are told, and the crowd love the ballad. My favourite and the only instrumental (no offence, I love Gomm's vocals, just this song is catchy and allows him to focus solely on the guitar-playing) is 'Stupid Blues', a memorable tune that shows Gomm at this best; using the guitar as a drum by hitting the front and sides, a bass by playing the baseline with his thumb over the fret board and all this whilst playing the bluesy melody pressing his fingers over the frets. Genius.

Another request from the same man in the crowd ("you are my master!") leads to 'Hey Child', with its heavy effects of delay and distortion. How Gomm manages to make a single (and truly battered) acoustic guitar merge into an ear-splitting electric guitar and back again is beyond me, and shows his versatility.

Final song 'Temporary', dedicated to his mum, is a lovely slow song about our precious time on earth, and makes full use of the tuning keys. Gomm de-tunes and tunes the guitar throughout the song, to give a sloping sound. He then finishes off with a bit of country style, complete with a guitar slide. The crowd sound impressed.

Next up a man I have heard so much about and yet managed to miss his shows for the last three years. Well not tonight. Tonight Matthew, Nick Harper will be performing as Nick Harper. Son of Roy Harper, a renowned axe-man, Nick is commonly recognised as being better than his dad, which is a little strange (until you see him play). 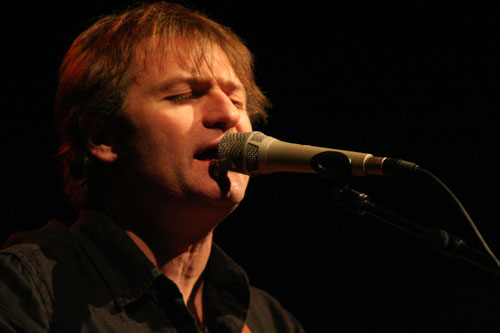 Less of a tapper than Gomm; anything goes for Harper. He works with an acoustic guitar and Apple laptop, and his playing style is truly amazing. Too fast for me to take in sometimes; his hands seem to cover the whole fret board in a matter of milliseconds, whilst at times he sings along with each respective note in what seems to be a battle of music with himself.

Having just returned from a life changing trip to Nepal in the Himalayas, Harpers main conversation tonight revolved around this journey. He now holds the world record for the highest gig, playing from the Mount Everest Base Camp at 18,500ft on October 21 2007. This raised money to update a cancer hospital in Nepal. 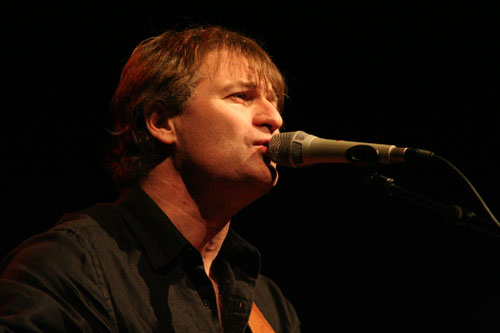 Many U2 jokes come out of these stories, like "I am not The Edge!" and one crowd member asks later "Did you find what you were looking for?!" Harper is a guy you can warm to very early on; he is a charmer, not afraid to swear and is talented to boot. Though while the stories of his journey are interesting, they start to take over the set at the beginning, meaning we only get around seven songs before it is getting close to encore time.

The set is expanded though (I noticed the old clock stating the finishing time in the foyer, a must in all venues if you ask me, was gradually getting later). Many more songs are squeezed into the last hour, and for two hours straight Harper wows the crowd.

The stand out songs are of course The Galaxy Song (originally from Monty Python's 'The Meaning of Life'), sang in a cockney accent. There's a musical divide brought together with a version of Elvis' 'Guitar Man', complete with Led Zeppelin's 'Whole Lotta Love' thrown in for good measure. Harper's vocals and guitar playing are on the mark; never a wrong note is hit. 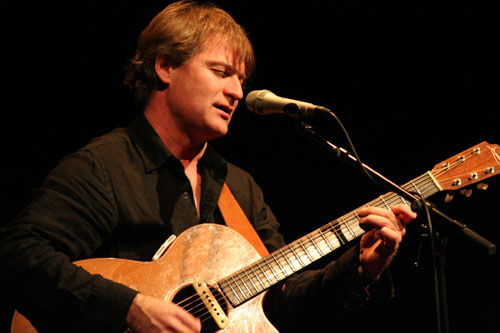 There are acoustic beauties with new songs like 'Blue Sky Thinking' and 'Simple' along with oldies 'Real Life', 'Building Our Own Temple' (with its smidgens of Public Enemy!) and (dedicated to his late mum) 'Imaginary Friend'.

I am completely impressed by Harper; the medley at the end ('Love Is Music) which lasts near on fifteen minutes (beforehand Harper states "Im gonna empty both barrels now!") is astounding; I would be knackered playing at that pace and with so many techniques bundled in. The de-tuning and tuning skills appear mid song and are more involved in the song than Gomm's earlier attempts. The night ends with a duet featuring Gomm backing up Harper on 'Radio Silence', a song "they have been practising on and off for four years now". Gomm looks completely in awe of his hero, but to me they are both incredible talents.
article by: Danielle Millea
photos by: Danielle Millea
published: 05/02/2008 18:34