Gogol Bordello are a difficult band to define, they are both a vibrant version of the Levellers and The Pogues, with their exhilarating attempt at bastardising - in a good way their diverse ethnic musical roots.

Frontman Eugene Hutz is Ukrainian, and to cut a long story short the rest of the band hail from places such Israel, Moscow and California to mention just a few places. This collection of such a diverse set of band members could well explain why their music is so wonderfully unique and incredibly powerful live. Not many bands can boast a selection of musical roots from at least four different nations. 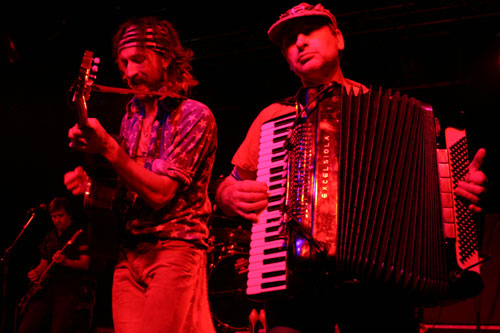 The band wasted no time in belting out their most recent material, they opened with a dance, bounce-along, song from their new album Super Taranta entitled Ultimate and throughout the night managed to slip seven other songs from their current album into the setlist.

Each track was belted out with energy and passion, with Eugene running and jumping around like a madman whilst playing numerous different guitars, and on more than one occasion jumping into the audience. 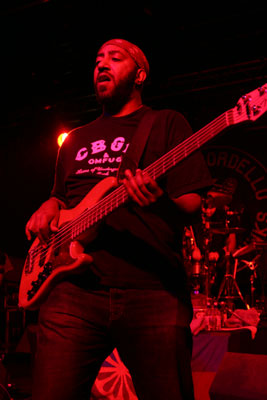 Their setlist spanned across their entire back catalogue, but it was mainly the tracks from the albums Gypsy Punks: Underdog World Strike and Super Taranta that caused a stir with the fans. To say that some of the songs have a political agenda would be an understatement. Their songs have cries for cultural revolution and asylum bills embedded into them.

The music itself as you might expect contains elements of gypsy music, punk, and folk, all rolled up into one frenzied, chaotic, yet somewhat enjoyable mess. I would be lying if I claimed to comprehend some of their lyrics, but regardless of this, when it comes to putting a live show, these guys have perfected their craft to such a high level that most other bands just seem mundane.
article by: Luke Seagrave
photos by: Luke Seagrave
published: 24/12/2007 01:01