I could not decide what this gig was going to be like beforehand. Having only heard a few Toy Dolls songs, the main one being their speed-charged cover of that childrens classic Nellie The Elephant, anything was possible.

The old guy supporting turns out to be The Adverts ex-front man TV Smith. As with Ed Tudor Pole and Attila The Stockbroker, the punk has been stripped down to just a battered acoustic guitar and a strong voice to help deliver his political rants. At first the songs are real ear-openers, like Bring The Bull Down and the slower The Lion And The Lamb. The powerful Not in My Name about fighting in wars we shouldnt could do with the help of a plugged in backing band. 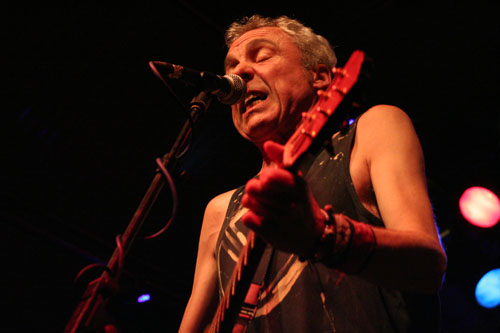 The bright coloured rectangular sunglasses are out; here are The Toy Dolls. Looking a lot younger than I imagined (they have been going in one formation or another for twenty eight years), it is a very pleasant surprise that none other than Duncan Redmonds (Snuff, Billy No Mates) is performing the drumming and extra vocal duties.

Not a punk band in the normal sense of things; there are no rants of any kind here, political or, in fact, meaningful. All the songs have a comedy theme to them, based on singer Olgas experiences, mainly from his hometown of Sunderland. Titles like Florence Is Deaf (But There's No Need To Shout) and one of the many alliterated names like Fisticuffs in Frederick Street make you aware that this is not a serious band. 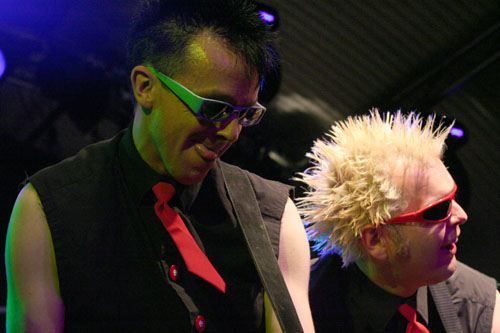 Chants of You Fat Bastard can be heard from the back when bassist Tom Goober removes the Toy Dolls uniform of sleeveless black shirt and tiny tie. Not many join in though, as many people here are in the same boat look-wise. That fact that Goober can ripple his beer belly only adds to the laughs.

Im not too impressed by Stay Mellow, a bit of a boring no starter, but songs like Alecs Gone and the controversial Ive Got Asthma (Olga actually has) even it out. Dressing up briefly in devils horns with a sparkler on a pitchfork for the start of Fiery Jack, theres a sense of fun in the Cockpit for once; much needed after the drabs of indie crap that grace many venues nowadays.

You can not imagine how hard I am laughing as twenty-odd larger than life punks swirl around in a pit, some taking it quite seriously, to Nellie The Elephant. That has made my month that has. Olgas high pitched voice is best heard when singing tunes like Olga...I Cannot! 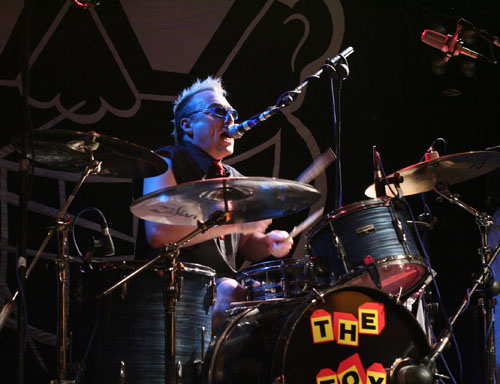 Bits of silver confetti are still being found in my drink thirty minutes after Olga has popped the cork of an oversized inflatable bottle of champagne, flying about with the help of the large fan on the stage. This fan is also responsible for Olgas tiny red tie pointing horizontally a lot of the time.

I had a lot of fun at this show, and that fact that Redmonds from Snuff is on the drums makes it all the more memorable. Calling this Our Last Tour? which I doubt it is, as people can not get enough in this serious world of nonsense high octane (and octave) punk rock, Im sure they are telling porkies as they do every tour.
article by: Danielle Millea
photos by: Danielle Millea
published: 19/09/2007 11:08