The evening starts early as there are several support acts and I just catch the last couple of songs from the first band Gold Sounds  Head and Shoulders and Dirty Dancing. The bands cheery guitar pop is well received by the crowd.

Jeremy Walmsley puts in a special guest appearance, just him and his guitar, but sadly only plays two of his modern acoustic folk songs  Five Verses and Dirty Blue Jeans.

Ed Harcourt is up next. He is renowned for generously nurturing the bands that support him on tour - the headliners tonight were his support act last year and hes returning the favour. He plays a short set on guitar and a pump organ that he claims he bought from Satan. We are treated to five beautiful songs delivered in his rich, warm voice. He has to restart Hanging with the Wrong Crowd as hes forgotten the words, and apologises for his French in Non, Je Ne Regrette Rien, the song made famous by Edith Piaf. The smoking ban has rattled Ed and he shares his views before singing Last Cigarette and dedicating it to all those pissed off by the smoking ban. Still, the Water Rats, with its low ceilings and lack of airflow, is a much more pleasant venue to be in without the acrid smoke. 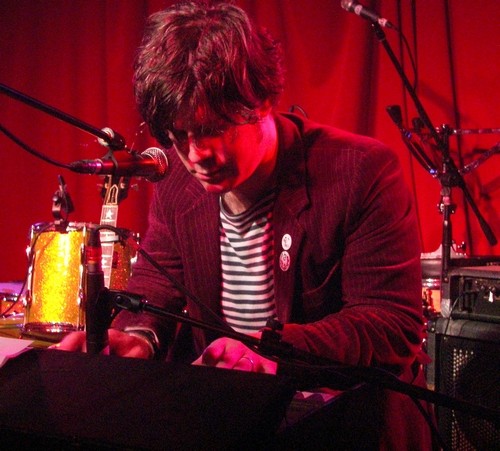 The main act, Hush the Many seem buoyant to be playing a rare headline slot, after supporting Fields recently (a couple of the band are in the crowd) and the lead singer doesnt stop smiling throughout the gig, although I have a feeling that happy hippy is his constant demeanour. The four regular members of the band are Nima on lead vocals and guitar, Alex on bass and backing vocals, Jo on cello, and Ruban on guitar; for tonights show theyre joined by John Tony on drums and Jonnie Fielding on violin.

The bands sound has almost completely metamorphosed since I saw them play last year. The whispered lead vocals, which you sometimes had to strain to hear, have become stronger and there are heavier, driving drums. The songs are now a world away from the mellow atmosphere on their debut EP Mind the Sprawl, with the exceptions of the rendition of the passionate Paper Doll and the very beautiful In Bloom, a gentle number where Alex kneels at a lowered mic stand to murmur her gorgeous vocals which perfectly complement Nima's.


The opening Song of a Page from the EP, which was recently released as a single, has been revamped into an extended dramatic swirling of peaks and troughs. Other highlights are the brooding and malevolent The Knife, which builds into a dark crescendo and the climactic encore number of Roots Crack Stone. The cello and violin contribute to the tumult of sound of this severely twisted and frayed folk, though the melodies and thoughtful words are never lost. The capacity audience seem to appreciate the new exciting, psychedelic incarnation of HTM  I just hope the band dont discard the soft, hushed moments altogether.