The Luminaire in Kilburn is a venue for music lovers, evidenced by the painted signs on the black walls reminding people that its a place to listen to live music and that if they want to chat, they can visit the pub!

Malcolm Holcombe, from North Carolina, is supporting the main act tonight. He alternately sits and stoops at the low microphone to growl his songs over his country-folk guitar sounds. His voice is gravelly, slurred and phlegmatic akin to Tom Waits or Bob Dylan and he has a unique and disturbing style of playing with a lot of head-shaking and eye-rolling. He plays a mesmerising set with some interesting and earthy songs  highlights are Sparrows and Sparrows and I Never Heard You Knockin'.

The main man Nick Harper is a troubadour, an outlaw who shuns commercial success  he wont sign to a major label or play larger venues - and doesnt believe in the standard three minute song. His father always gets a mention in reviews as hes renowned folk-singer and guitarist Roy Harper, sometimes reverentially spoken of as the fifth member of Led Zeppelin.

Refreshingly, Nick doesnt seem to have the usual son of a famous father hang-ups. He refers to his dad during the set and sings a song called Aeroplane comparing escapism to his dad whirling him around by his ankles when he was little. He also tells us hes stolen his dads idea for a concept album about the seven ages of man and made it into a four minute song. This is the outstanding By My Rocket Comes Fire - the title is part of the poignant refrain which runs through the song and seven ages of man, symbolising the spark of life which is finally extinguished - I hope that when Im done, theyll say my speck of dust inspired.... 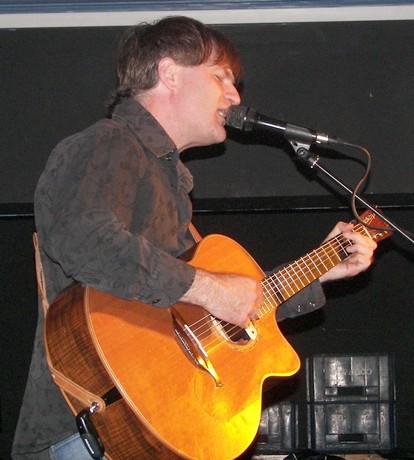 There are a few other radio friendly songs  the lovely The Verse That Time Forgot, the frenetic version of Guitar Man spliced with Led Zeppelins Whole Lotta Love, the Dylanesque The Field of the Cloth of Gold and the angry Karmageddon. His audience interaction is warm and very funny  there is self-effacing humour, plenty of banter with words of introduction to the songs, and he responds with witty retorts to all the friendly heckles that hes thrown during the show. At one point he flirts with an audience member singing her bursts of the disco hit (Eye to Eye) Contact and asking her to dance on stage as eye candy for the show (she declined).

Nick also takes every opportunity to show off his astounding guitar skills and clearly hes a hugely talented guitarist, strumming fast and furious, and playing with an open tuning style in many of the songs. The audience indulges and encourages his guitar meanderings - the last song in the main set Love is Music lasts for 23 minutes and is expertly interwoven with Jeff Buckleys Grace and Blurs Out of Time. Hes a gifted vocalist too and able to do gentle, almost feminine vocals, through raspy and angry rock, to swooping vocal acrobatics and a falsetto comparable to Jeff Buckleys.

He saves the best to last with Frank Zappas Titties and Beer and his own Blood Song played for the encore, both requested by the crowd, as well as his current single Blue Sky Thinking which is raising funds for LoveHopeStrength, a cancer charity founded by Mike Peters, and has reached number one in the iTunes Folk Chart. Titties and Beer is a rambling song about the devil swallowing the writers girlfriend and beers, and Nick quite literally strings it out with his dexterous guitar work and a snarling voice to illustrate the devils lines, with some improvised additions about Bush and Blair and a snippet of Gordon Brown, finer temptress.... Blood Song is spine-tingling and a good finish to the set with a hypnotic beating pulse tapped out on his guitar.

Sadly, after nearly two and a half hours, the crowd has thinned out  mostly through practicalities of getting the last train or tube home. We didnt get to see Nicks famous trick of effortlessly changing a string whilst still singing, but its all pretty impressive stuff and an extremely high energy performance. Its difficult not to be in awe of the fact that he maintains this sort of enthusiasm and skill level night after night.

I highly recommend catching his live show, though you have to be prepared to stand in admiration of his guitar wizardry for over 2 hours, or see him at a festival over the summer for the super-charged but condensed version.
article by: Helen O'Sullivan
photos by: Helen O'Sullivan
published: 06/06/2007 17:15