Rufus Wainwright, the prince of pomp and camp, is currently touring to promote his fifth album, Release the Stars which could be the one to finally achieve the mainstream and more commercial success that hes been craving.

He came close to achieving iconic rock star status a few years back when he was on a drugs and drink death-spiral but thankfully he chose rehab rather than self-destruct and then released the wonderful and critically acclaimed Want One and Want Two albums. The latest album is in a similar vein and has Rufus trademark operatic flourishes and orchestral embellishments.

Tonights show is at the Old Vic Theatre and it seems like an eternity since Rufus played the much smaller Lyric with just his piano and guitar for accompaniment and won the audience over completely when he stood at the front of the stage to sing an a cappella version of Percy in the Park.

This current UK tour, in contrast, features a full band complete with brass section and several costume changes and his popularity has reached a point where he can comfortably play a run of five sell out nights at the Old Vic and by all accounts, attract many celebrities amongst the audience. There is no support act and Rufus plays for two hours with a twenty minute interval. The orchestrated and complicated arrangements of his recordings are brought to life with guitars and banjo, double bass, drums, French horn, trumpet, clarinet and Rufus himself, adorned in a tight-fitting silver pin-striped suit, alternates between piano and guitar. We have macho backing vocals tonight and my male companion is very disappointed that there is no gorgeous Martha Wainwright or Joan Wasser to drool over.

Opening with a full-on version of the title track, Rufus parades the songs from Release the Stars and proudly declares that it is number two in the UK album charts (Linkin Park is number one). All the new songs are showcased, most with swirling band accompaniment and some more pared down. Its on the more simple structures that Rufus voice is shown off best, for sheer range and power, especially in the numbers that he performs at the piano  Tulsa dedicated to Brandon Flowers (lead singer of the Killers) who apparently tastes of potato chips in the morning  presumably Rufus fantasy rather than fact, and The Art Teacher, a beautiful song about a schoolgirl crush.

At the end of the first half Dawn French makes a guest appearance to perform the spoken word part of the romping new song Between My Legs over a dramatic segment of Phantom of the Opera, spoken by the actress Siân Phillips on the album version. 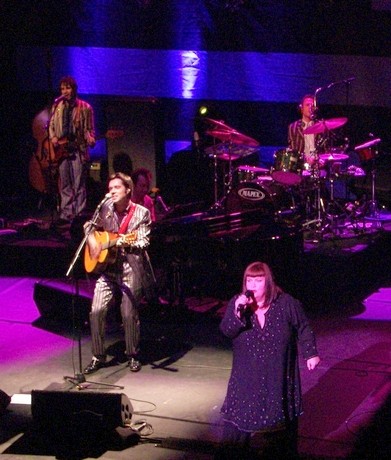 After the interval we are treated to the spectacle of Rufus in rather cute Lederhosen and black shirt. Greeted by wolf-whistles, he launches into an old favourite Harvester of Hearts. The second half includes a couple of stunning traditional music hall numbers - a Gershwin song Foggy Day in London and Noël Cowards If Love Were All. There is also a traditional and mournful Irish song called Macushla which his mother requested he play on this tour; this is performed unplugged and we have no trouble hearing Rufus soaring vocals in the perfect acoustics of the Old Vic.

He plays old favourites too including the epic I Dont Know What It Is, Pretty Things, a chaotic but exciting Beautiful Child, Complainte de la Butte, which was featured in Baz Luhrmanns film Moulin Rouge, and 14th Street, featuring superb banjo playing from Jack Petruzelli, which ends the main set.

For the first few songs in the encore, Rufus is wearing a dressing gown. He soon adds lipstick, chunky glittery earrings and high heels and then reveals his Judy Garland outfit of jacket, hat and black tights for Get Happy, with the band gamely performing and dancing around him in suits, and the audience clapping, cheering and laughing all the way through. The show finishes with his signature tune Gay Messiah and he receives a well-deserved and lengthy standing ovation.

The only minor criticisms are that Rufus fluffs a few lines and occasionally mumbles (endearing traits), and we dont get to hear the emotional Dinner at 8 or his Jeff Buckley tribute song Memphis Skyline but these are petty complaints. His between song banter is always delightful and when Rufus is on form, like tonight, his songs and voice are just awe-inspiring.

Set list:
Release the Stars
Going to a Town
Sanssouci
Rules and Regulations
Tulsa
The Art Teacher
Tiergarten
Leaving for Paris No 2
Between My Legs
**
Harvester of Hearts
Do I Disappoint You
Foggy Day in London
If Love Were All
Nobodys Off the Hook
Beautiful Child
Not Ready to Love
Slideshow
Macushla
14th Street
***
I Dont Know What It Is
Pretty Things
Complainte de la Butte
Get Happy
Gay Messiah