eGigs tracks down The Draft's drummer George Rebelo for a quick chat before their Manchester supporting slot for The Bouncing Souls. 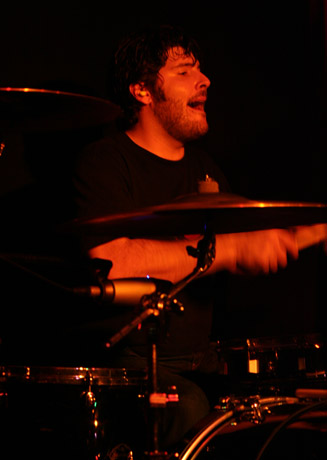 Have you toured with the Bouncing Souls before?

You supported Samiam at the end of last year in the UK, are you constantly touring?

Describe your sound to people who have not heard you before.

Just rock and roll, I dunno, we have two guitars, bass, drums, it's hard to explain, we write rock and roll songs, I can't pigeonhole it.

Tonights show is sold out, and I believe a lot of people are here for both you and The Bouncing Souls equally; they see it as a split show. How does that feel?

I think we're doing pretty good as main support but we couldn't carry this tour without the Bouncing Souls, no way. No way in Hell!

Why chose the name The Draft? Were there any other strong contenders for names?

It means nothing really, we needed a name and that was the only one that all of us kind of like thought Eh it dosen't suck. It doesnt matter, once it's out there, you know what I mean? The Beatles was a terrible name for a band but......

I hear you have a harsh practice timetable of four hours per day, six days per week.

When we're not touring and we're actually writing music we practice, probably about four hours a day for five days a week, Monday to Friday. We write 'til we can't write no more and then we take a little time off, then we come back.

Did it seem a little weird going back into Salad Days studio to record In A Million Pieces (the last three Hot Water Music albums were recorded there) .

Brian's [McTernan - producer] been a long time friend of Jason, Chris and myself so it was kind of nice. Not really a continuation, we were able try new things like we were able to bring in keyboards and horns and things like that. It didn't feel so pigeonholed, like to towards the end of Hot Water [Music] we were like what do we do now? We feel a little more creative on this record.

Did I hear that Todd sometimes plays a guitar with its neck carved out of a tree once struck by lightning?

Youre still with Epitaph; whats the reason for that?

When we were looking for labels and they seemed to be the logical step, like they were the most into it. Brett [Gurewitz, founder of Epitaph Records and Bad Religion guitarist] would call us like twice a week, during [time at] home, we really want you to be here. It just made sense you know, he really backed it, and it's really hard to find a label that's as big as Epitaph and youre friends with the owner, so, when the owner has your back you're doing something right.

Do you have another album coming out?

We actually have an EP coming out; I think it's next month or two months from now, it's gonna be iTunes sort of downloadable stuff, electric EP, and then we have a 7 inch on No Idea [Records].

We're thinking about doing something with Samiam, and possibly The Bouncing Souls, but we don't really know; nothing's hammered out yet. It just seems to be a lotta talk.
article by: Danielle Millea
published: 18/02/2007 15:54