Cute Is What We Aim For / Hit The Lights

When I left Yeovil it was a concrete clad sh*t hole, filled to the brim with ASBO worthy chavs and the type of unruly degenerates that find entertainment swapping loved ones in the back seats of Vauxhall Novas in some random carpark at 3 in the morning. What was worse was that it had a dwindling music scene that largely consisted of The Wurzels, and well...not much else really.

Nowadays...Yeovils still a sh*t hole, its still filled to the brim with the next generation of chavs (now complete with pregnant teenage girlfriendsand their friends), and funnily enough The Wurzels are still playing, this month in fact. One change though, and a significant one in my books, is that Yeovil is amassing a rather good music scene...

Most of this takes places at Yeovils Ski Lodge, which has become an important stop-off point on many a bands touring schedule. Its situated just above a corrugated iron monstrosity called The Gateway, which is the closest thing Yeovils ever going to get to a church.

One thing that strikes me as peculiar about The Ski Lodge is the lack of atmospheric lighting. Instead of the dark, shadow swepped interiors of dodgy backstreet indie bars that Id grown accustomed to, both the band and the crowd were saturated in bright white light, tainting the ambience of the gig.

Lighting by no means was impacting on the crowds obvious enthusiasm towards tonights performers, and support act Hit The Lights were going down better than any support I have seen in a long time; hardly surprising really as they churn out conventional emo-by-numbers pap to a hysterical crowd. While its easy to slate their lack of originality, its not quite as easy to dismiss the immediacy of their live performance, which is enthralling to watch.

The band have a captivating stage presence, and on more than one occasion I had to check to see if I hadnt arrived late, missed the supports all together, and stumbled in on the headline act. Nasally singing, and cringe worthy poses are quickly mitigated by the bands evident connection with their audience, and sweaty, harried moshing ensued.

Bodybag does well to bridge that gap between emo and pop punk, harking back to memories of Sum 41, and Blink 182, but never losing that emo feel. It all gets a bit worryingly clichéd when the group slow things down for One Hundred Times, but the weaker moments of the set are barely noticeable in what was nothing short of a brilliant performance. They may be treading the same path as New Found Glory and Fall Out Boy, but how many other bands are delivering their music as good as this? 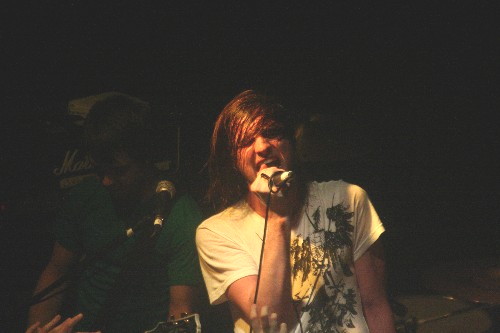 Suffering from the typical emological (new word there, wonder if itll catch on..?) disease that all of these bands have, Cute is What we Aim For have a stupidly long and pointless name, that must drive record companies mad whenever they have to write out their royalty cheques.

Its a little known fact that the emo movement was actually started by Superdrug, who had noticed diminishing sales of hair straighteners, and had then created a whole new sub genre of pop punk in an effort to get boys to take a walk down the girls beauty care section of their shop, stop off and buy a hair straightener, and then notice some rather pretty eye liner too. Then bang, were surrounded by a new cultural fad that youll either embrace with open wrists or scorn at with a mightier-than-mighty snobbery.

Cute Is What They Aim For are doing their bit for the cause and singer Shaant Hacikyan has gone for the washed out, windswepped hairstyle, that you can only get if you force members of your band to all hang from one side of your fringe for long periods of the day.

It takes a little while before the band work out what gets the audience excited, mentions of USA are met with a resounding boo, while the invitation to get wasted are met by a hearty cheer/girly scream by everyone here. Ironic, as its going to be a good few years before most of the crowd will actually be old enough to get legally wasted.

The highlight of the set is the catchy, power pop number that is Theres a class for with a chorus that chimes along "Drama doesn't follow me, it rides on my back, I may be ugly, but they sure love to stare". Its a little pop gem thats going to leech its way onto some anonymous teen movie soundtrack come the summer, if it hasnt already. Its just as infectious as anything All American Rejects or Fall Out Boy have released, and it wont take long to ripple around the airwaves.

Again, The Curse of Curves is nothing particularly new, weve heard it all before, and as irritatingly hummable as the chorus is, its certainly not going to break any new boundaries. I dont think the crowd care though, and impromptu crowd surfing, a mini stage invasion, frenetic showmanship from Hacikyan (who is brilliant throughout) and a flawless party vibe all made for a brilliant gig. 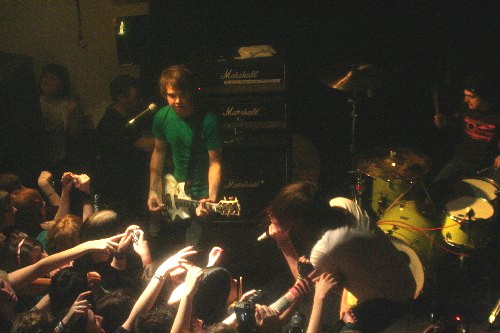 Something to be said about CIWWAF is just how much they appear to be enjoying themselves. This isnt so much of a gig to them as an opportunity to invite all their friends down to a party and play music that they love, and the feeling is reciprocated by the crowd. Regardless of the emo tendencies to dilute their lyrical content, while the music is this happy its a factor that can just be overlooked, well almost.

The atmosphere was great, and the success of tonights performance can be attributed to the promoters as much as the bands. Yeovils music scene is finally being elevated to a noticeable level, and this can only be a good thing.
article by: Scott Johnson
photos by: Scott Johnson
published: 04/02/2007 12:09

more about Cute Is What We Aim For
more about Hit The Lights
more about Ski Lodge, Yeovil