This is an exciting evening for the young support bands as they are both performing their first ever London shows. First up are Onions for Eyes, from Guildford, who describe their music genre as shambolic pop trash, which is fairly accurate. They create a raucous noise with just three members and perform some dark songs, tackling topics such as rapists, necrophilia, death, and there is a vicious song about Princess Di  not for those of a sensitive disposition.

The 5-piece Borderville, from Oxford, are stylish, fast-paced and tuneful. The lead singer has Bolanesque vocals with the eyeliner and image to match and the band clearly have enthusiastic support from the young, collegiate crowd. Stand out songs include the excellent Written for the Stage and Glambulance.

Then we enter the surreal world of Thomas Truax, an eccentric and completely endearing singer-songwriter from Wowtown (!), who builds his own weird and wonderful instruments which are his travelling companions on the road. These include Sister Spinster, an intricate machine with whirring wheels, tambourine, high hat and drumsticks, the Backbeater, a percussion instrument with drum pad worn on his back, the Hornicator, an adapted gramophone trumpet, and the Stringaling, which looks like its been made from a concertinaed hose with small drum, penny whistle and string attachments. Thomas also plays a guitar called Hank. 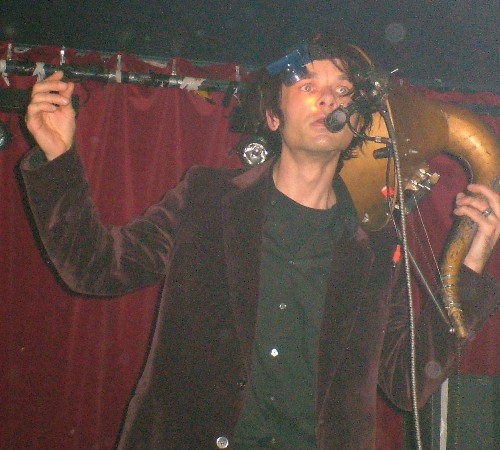 He begins his set with the lights down, wearing a head torch and singing Prove to My Daughter into the Hornicator whilst tapping out the beat and looping his voice. The audiences initial reaction is bemusement as its a bit eerie, but were totally mesmerised. Most of his songs are quirky takes on life, filled with wry humour  highlights are Inside the Internet, a spooky song about friends disappearing into the worldwide web, and the strange, beautiful tale of The Butterfly and the Entomologist where the butterfly sings the hypnotic refrain of Im going to a no-mans land because men and violence are intertwined.

The crowd assist with sound effects on Why Dogs Howl at the Moon and Thomas unplugs his guitar during Full Moon Over Wowtown and wanders amongst the audience, balancing on tables and disappearing through a side door to reappear on stage. The encore is In Barcelonely, the softest, sweetest song on his Audio Addiction album.