Just down the road from Old Trafford, The Lowry Theatre in Salford is a venue that usually plays host to Exhibitions, Plays, Lectures & the occasional Musical Performance, including Martha Wainwright on her current UK Tour.

Watching Martha playing live in the intimate Quays Theatre at the Lowry was almost an amalgamation of all these events complete with comedy, heartbreak, personal confessional & of course, the music.

The best way to describe Ms Wainwrights sound (lets forget about genres for a minute) is that its all about her voice - a unique instrument not only in timbre but also in its emotional honesty. Her brand of Indie Pop/Folk is reminiscent of other female performers such as Ani DiFranco & Beth Orton but theres a definite air about Martha Wainwright that makes her stand out as a rarely gifted musician.

It would be virtually impossible to talk about Martha without mentioning her musical pedigree  father Loudon Wainwright, brother Rufus & mother Kate McGarrigle. Indeed theres an air of self-possession about Martha that must be credited to appearing on stage with the various members of her family over the course of her life.

Its very rare to be able to say that a solo singer standing still on an empty stage made for utterly compelling viewing  no matter how great their voice may be, but Wainwright seems to be able to mesmerise a crowd simply with her stage presence. It truly is a case of someone projecting such raw emotion that she would be able to sing the Phone Book & still touch people.

Most of the tracks Martha performed during the show came from her Debut self-titled LP, which was released in 2005. Songs such as Factory & Far Away appeared early in the set, with one of her stronger numbers, Ball & Chain (a song about male sexuality) rearing its head about half way through the show. 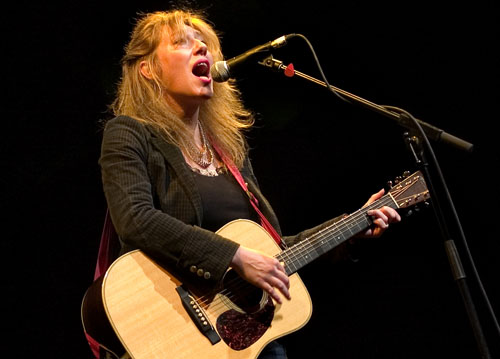 British singer/songwriter Thea Gilmore was brought onto the stage to sing with her on two tracks, the first Gilmores This Girl Is Taking Bets & again for the final song of the evening, Dont Forget. Wainwright was also happy to sing a cover of Leonard Cohens Tower of Song at the suggestion of a man in the crowd. Her biggest hit to date (supposedly written as an ode to her father) Bloody Motherfucking Asshole was held back until just before the encore.

It may have been the case that the mood of the show would have become quite oppressive if it wasnt for the constant light-hearted dialogue between Martha & the audience, but by not following a set list, asking for the house lights to be turned up so she could see the crowd & occasionally receiving assistance from people calling out a forgotten lyric all helped establish the feeling that she was playing to entertain a group of friends rather than the paying public.

As much fun as it is to go to a large Smokey venue & see the latest it band, its not very often that a musician will rip out their heart & present it to you. If you want to see a performer who is compelling, honest & truly unaffected, I suggest you aim to see Martha Wainwright live. This is what music is meant to be.
article by: Kirsty Umback
photos by: Kirsty Umback
published: 05/06/2006 10:06

more about Martha Wainwright
more about The Lowry, Manchester