It used to take years for bands to be of sufficient stature to pay the Apollo, Manchesters finest venue. An act would have to serve their apprenticeship from the Roadhouse to the Academy before, maybe on their third album, getting the opportunity to play to the grand balconies and wonderful sloping floor.

Its different these days. Such is the clamour for tickets that an act with a debut album barely months old can sell out a couple of nights here. From these, some will fall by the wayside, daunted by the size and unable to make the huge stage their own.

Take tonights support act, The National. They recorded their first album before theyd even played a gig  they were friends mucking about with music  and it shows. Matt Berningers Tinderstick-y vocals struggle to be heard above their brand of glum rock and his habit of forcefully lodging his spare hand against his ear, or across his chest, suggests hes not comfortable up there. In addition, the bands spotlight frequently moves off the band and onto the audience, which wouldnt be the greatest confidence booster, even without the sea of stony faces.

Tom Smith seems to be suffering from a similar crisis, tightly hugging himself as he and his band punctually take the stage for what is Editors biggest gig yet. However, this proves to be just a personal gee up and as they launch into Someone Says the singer is quickly animated, and the pattern for the evening of fiercely beaten drums, Spartan riffs and, yes, Joy Division references, is set. 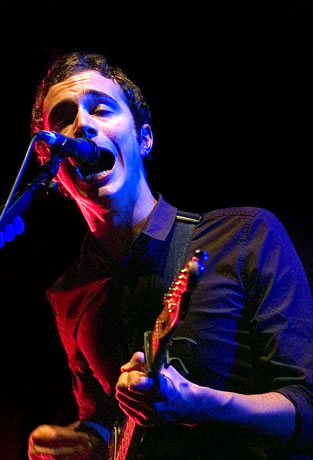 Any comparison with the image of Ian Curtis is wayward though, as Smith is quite happy to interact with the audience during songs. During All Sparks any doubts as to whether the band are truly uber cool are dispelled when Smith attempts to start a bout of handclapping and smacks himself on the nose with his guitar neck.

The front man, as they always do, draws all the attention. He is all over the stage, constantly contorting his unfeasibly bendy body - the on floor foetal curl at the end of new song Bones being the most extreme example of his elasticity. In comparison, bassist Russell Leetch is boxed in, monitors in front, Piano and stage exit either side all preventing him from showing off. 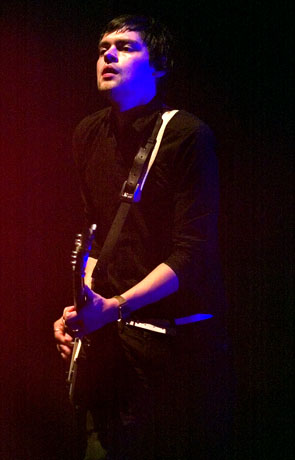 As the gig ticks on to the 45 minute mark each tune suggests that this is the last one before the encore. First Camera builds from a sparse start to a massive crescendo, then You are Fading does the same. Now they throw in their biggest hit Munich, which youd expected to have been saved. It is rapturously received; the guitar even more frenetic than it is on record. It actually is Open Your Arms that is the last song.

Bizarrely, as the encore begins with Lights, a gang of 6 show up and take their (previously empty) seats at the front of the balcony. Judging by their reaction they are fans, so where have they been? 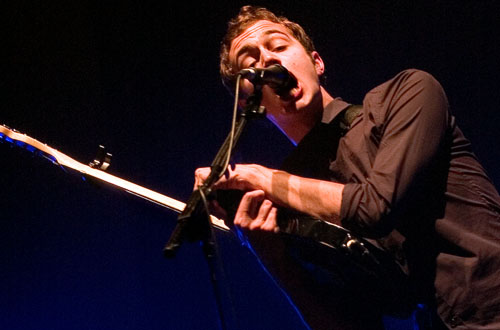 No matter, as Smith is now singing acappella well we know where were going, but we dont know where weve been, the start to Talking Heads surely uncoverable Road to Nowhere. The audience holds its breath, wondering whether they were actually going to do this. They do, and its not half bad. They cover it, not copy it, and adding the Editors signature guitar to the sound is sufficient to make it acceptable.

Finally, they close with Fingers in the Factories, during which even Leetch escapes from his cell to venture stage front. Its a rousing finale to an impressive night.

Biggest gig of their career? This has been a piece of cake. They may have fast-tracked to this venue, but with another album or so of similar standard material, theyll play bigger.
article by: Jonathan Haggart
photos by: Kirsty Umback
published: 30/05/2006 13:16