The Millennium Square is keeping busy these days, hosting concerts a plenty. The Kaiser Chiefs graced here last month, and it will soon be the turn of Hard-Fi, Fall Out Boy and Snow Patrol. Tonight however it's the turn of a variety of broad acts.

The Motorettes brand of Rock and Roll was a good start to the show. The lads from Tynemouth are getting ready for their gig at Hi Fi North next week. Shame most of the crowd were missing, probably collecting their tickets from the Town Hall down the road.

I have to hang my head in shame for being from the Leeds area and never having set eyes nor ears on ¡Forward Russia! With their matching t-shirts showing the unique mix of symbols, the local lads and lass played to a crowd apparently made up of their friends and ex-band mates. The strange movements of the erratic singer (the mic cords can be very dangerous to under 25s) and the northern banter between guitarist and audience made for a good show, topped of with their sound of indie-punk-rock.

Warming up for their slot at next weeks Full Ponty festival in Wales, the band with the name no one understands Biffy Clyro gained a bigger crowd than the previous acts. Although what little sun there was buggered off to leave the crowd getting soaked with that fine rain, Biffy impressed with their random but beautiful arrangements of music. Lyrics about love sang by all three members played over varying tempos and rhythms, I haven't a clue how to describe them. It's just brilliant, especially the debut album tracks. 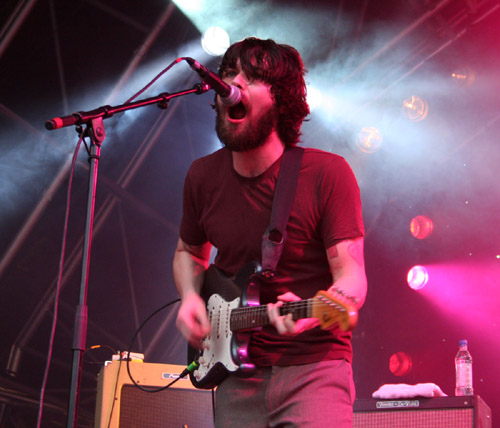 Now I ain't a big fan of the Editors, and the rain pushed me to the decision to leave the show early. From what I saw they have a lively singer but the music is nothing new. To me Biffy should have headlined, as they had a lot of hardcore fans in the vacinty. The Editors are fairly new, and like Hard-Fi in a month or so, are these gigs just publicity stunts where the real crowd-pullers are the support acts? 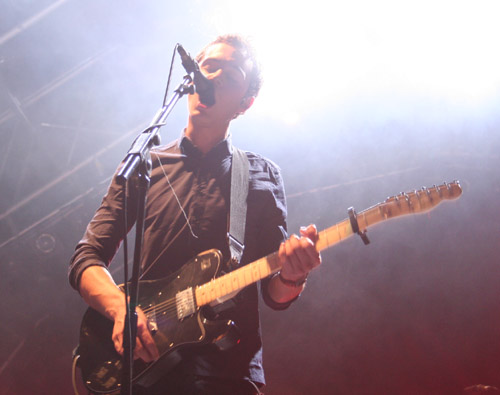