As far as rebirths go, Gary Numan's has to be one of the most startling. From 80s New Romantic to full on Industrial Metaller takes some beating, but it is just that transition that he has made, and he has made it very well in this reviewer's opinion.

The crowd tonight is sparse by Academy standards, which is testament to the fact that Newcastle's metaller kids are not quite as switched on as they like to think they are. If they had been, the place would be packed out tonight, but as it is, Numan is playing to a three quarters full hall, with the upstairs section closed off. The bonus of this being that there is plenty of room to move around, and it never feels uncomfortable, unlike the music.

'Here is my small black box, filled with hurt, sent by you' - the first words uttered by Numan on taking the stage. The lines are taken from 'Pressure', the ominous, brooding opener for new album 'Jagged', and it sets the scene for the rest of the show.

The majority of the set is made up of tracks from the new release, including a scathing rendition of 'Halo', and one of the highlights of the evening, the corrosive title track from the the album, 'Jagged', which is every bit as ominous as Trent Reznor in a particularly nasty mood.

The comparisons to artists such as Reznor, Marilyn Manson et al cannot be avoided, and Numan's live show is every bit as exciting. The malevolent force on stage holds everyone in the venue rapt, but without the theatrics normally associated with the industrial metal scene. 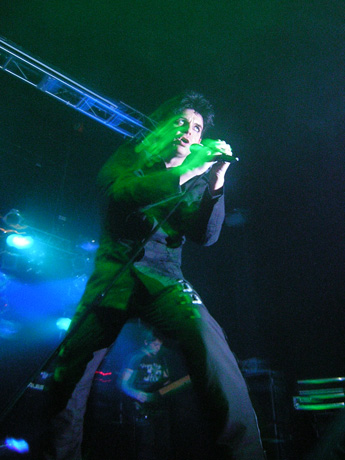 A searing take on 'Are Friends Electric' in the encore is one of Numan's few nods to his past in this set, and it is the only song played all night which does not seem to fit the flow of the evening, which may be why he saved it for the encore. It felt more like a cover of another artist's material, which shows just how far the transition has gone.

By the time Numan leaves the stage, the Academy is clearly split into two camps - those who came to see 'Gary Numan from the 80s', who clearly hated it, and those who knew what to expect, who loved it. What cannot be denied though, is that Gary Numan is now making some of the most exciting music on the metal scene in the UK, and fans of the genre would be wise to check it out.
article by: Tommy Jackson
photos by: Tommy Jackson
published: 25/04/2006 14:11