At first I thought Fields were going to be a straight laced Oasis rip off. The early signs were there: acoustic guitar, cappo on the second fret, its Wonderwall all over again. Thankfully, Fields style borrows from further a field (excuse the pun) than Morning Glory.

At times Fields sound fairly similar to The Charlatans, at others their slice of melodious soft rock male/female harmonies can be likened to Seafood, but there is an experimental electro side to Fields that keeps them from drifting into conventional indie droaners.

The band left the stage after closing with the dreamy If you fail we all fail. I got the impression that they were slightly too relaxed for this gig. A future support slot with The Mystery Jets is more likely to get them noticed.

In direct contrast with Fields drawn out melodic soft electro rock Brakes opted for songs that spanned approximately six seconds. As far as specialists in short songs go The Vines have nothing on them. 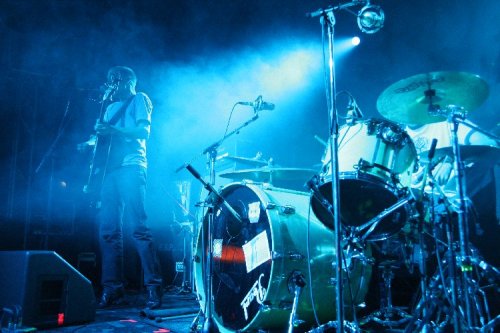 Brakes referenced plenty of bands in their performance, including Edinburghs My Latest Novel. They even covered a Jesus and Mary Chain song. While they were playing their own material they sounded occasionally like a cross between The Libertines and The Rakes. However, that association went right out the window when Brakes started exploring old folk songs and the country and western genre. Completely unpredictable Brakes decided to round off their unusual set with the brilliant Comma, Comma, Comma Full Stop; a song that lasts about the same time it takes to consume a single calorie from a Big Mac.

Editors fan base has certainly grown since the bands proper emergence on the music scene early last year. The rapid succession of festival appearances no doubt aided that increase in popularity, but the reason for tonights sell out gig can more than likely be attributed to the brilliance of their phenomenal debut album that has become something of a sleeper success.

Erratic arm movements and gestures to the ceiling from front man Tom Smith all seem a little melodramatic, especially after Brakes tongue in cheek performance earlier on, but there is a gripping sense of grandeur and emotive sensitivity in Editors lyrics and more importantly in their music that has the ability to mesmerize the audience like a hypodermic needle. The Glasgow Barrowlands itself is an enclosed plethora of atmospheric enormity. I have yet to see a bad gig in this venue, which has a size that should negate intimacy but instead provides the audience with a homely, welcoming feeling that only serves to benefit the bands that play there. Ironic though it sounds, its very easy to feel alone in a venue packed with 5000 people; but in the Barrowlands you never really feel alone.

Editors open with Lights, kicking off exactly the same way as the album The Back Room does. The only single that Editors havent re-released Blood follows swiftly after. Smiths vocal range may not be as broad as many other vocalists but it has a gloomy charm to it that delivers an almost gothic, certainly haunting impression.

Editors also showcased a couple of new songs tonight, the first of which was Bones, a track that adheres to the thematic conception associated with the debut album, retaining the Joy Division confines within which Editors operate in but building on that style to create yet another potential anthem. 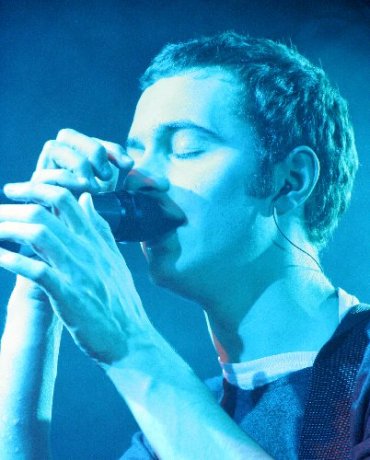 The lighters are out, something that we will be seeing a lot less of from next month onwards when the no smoking ban comes into place. All Sparks is the song thats responsible for causing this peculiar traditional event of raising your zippo fag starter 6 inches in the air and proceeding to burn the afro on the tall chap standing immediately in front of you or just singeing the fingers of the 12 year old groupie who you didnt quite see. Its a poignant moment, one Editors themselves had clearly been looking forward to and All Sparks is one of the highlights of the set.

Bullets preceded Let Your Good Heart Lead You Home; a unique track because it was produced by Editors chums Guy Garvey and Craig Potter from soft rock yawners Elbow. The fantastic You are Fading is also included in the set list, which may have been a bit of a surprise for some people. Smith dedicated it to the fans who had watched Editors from the beginning but it turned out to be the best song of the night, building to a dramatic energetic climax that symbolises the brilliance of this band as a unit. 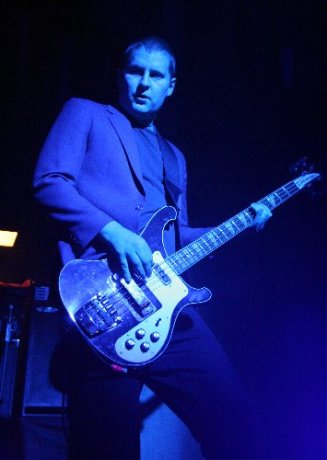 Editors bring out one of those glitter-balls that were popular during the 70s. Just think Saturday Night Fever if you dont know what Im talking about. The obtrusive object takes centre place on the stage and lit up with dazzling blue lights that turn the Barrowlands into an electric light aquarium.

Editors close with the superb Fingers in the factories, the only song they had left that could have properly ended the set. This was a brilliant gig from one of the best up and coming bands of the last couple of years.