To celebrate the 8th birthday of Beatz & Bobz the Exeter based Breakbeat promoters thought theyd treat us to the champions of dub/house/reggae/breaks the inimitable Dreadzone. The band are currently on their Once Upon A Time tour to promote their first new album in four years.

The Lemon Grove or Lemmy as we like to call it is looking pretty full even with the extra space of the second room with Beatz & Bobz regulars in residence. The audience is a little older than your average University gig and have come from all over Devon and Cornwall for tonight is Dreadzones furthest foray South West.

The support band are DibDub sound system with some extra accompaniment and they warm up the crowd well for the main event. At the allotted time, the crowd are buoyant with anticipation as a chair is put before one of the microphones.

To a huge cheer Dreadzone take to the stage, a full band with Leo Williams on bass, Dread founder Greg on drums, Steve Roberts on guitar, Ben Belafonic on decks and Earl 16 and a hobbling MC Spee on crutches, who makes his way painfully to the chair to sit. The shaven headed one has done his knee in and cant give us his trademark dancing but delivers a brilliant vocal performance and using his arms, head and body tries to give us as much rude boy bounce as he can. 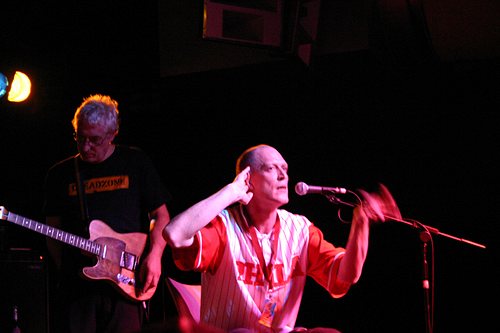 In fact he does an impressive job of lifting the crowd, who are wreathed in various pungent aromas and working up a sweat, some are stripped to the waist and there are a lot of dreads flying about. Earl 16 adds vocal depth to the performance and its terrific. Everyone is dancing, everyone, the sound is tight the bass is fat and even the mixing desk techs are dancing and theres a girl on behind them swinging light poi.

Its sexy and we all bounce to the groove and from the new album were treated to First Steps, Once Upon A Time (In Jamaica), Iron Shirt plus such Dread classics as Return of the Dread, Digital Mastermind and Little Britain and many more finely blended dub-reggae combinations. Wow, what a terrific live band and what a terrific audience. Spee tells us its one of the best nights theyve done and I certainly have to agree a riotous romp through their new album and their old stuff. 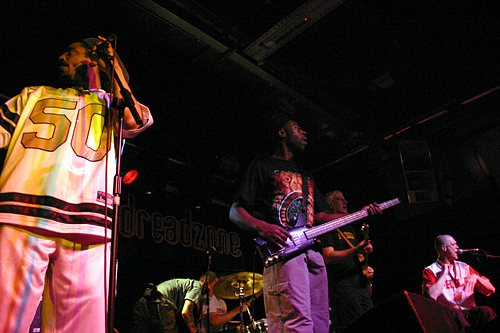 Three nights earlier Id seen Bloc Party in the sterile environment of Exeters Great Hall and thought they were good but the crowd had disappointed me, Id lamented for the old days of heat sweaty gigs and lo here were Dreadzone in full sweat drenched effect. Not only would they musically blow Bloc Party out of the water but the production was better and the band were enthused with enjoying themselves and delivering a great live performance with Gregs drums, Simons guitar and Leos bass adding to the two vocalists and DJ samples.

The crowd and relaxed atmosphere certainly helped and even those normally too timid to dance were grooving to the infectious tunes. I defy anyone to stand stock still throughout a Dreadzone show. A brilliant and memorable performance ended excellently with us yelling for more with adoration before being able to spill into the other room for more Breakbeat from the Beatz and Bobz DJs and a cooling pint or two til the small hours. Dreadzone are one of the best bands on the live scene at the moment.
article by: Scott Williams
photos by: Karen Williams
published: 30/10/2005 22:24