"Broken Glass - Do not take your shoes or sandals off" was the welcome at the venue and then "Welcome to Hell" was the greeting from Booga. Hmmm something gave me the feeling he was less than happy with the set up. It all became apparent very quickly. Not only is the venue above a R'n'B club so you have to battle your way through shaking booties to get upstairs, but the bass coming through the ceiling made it almost impossible for the Guys to play. Despite "polite" requests from the man himself, Ezio, for the bass to be turned down, the inconsideration continued throughout.

However, the effect could hardly be noticed by the audience and the band showed their professionalism and played a cracking set.

First off was the fantastic Wild Side, with just Ezio and Booga playing acoustically. The rest of the band were then introduced, first being the Rev Lee Russell who plays an ecletic mix of instruments making ecletic noises. Secondly Lydia Cascarino on bass and then strangely, Alex Reid, was carried to his drums - because of injury or just his status, we don't know! 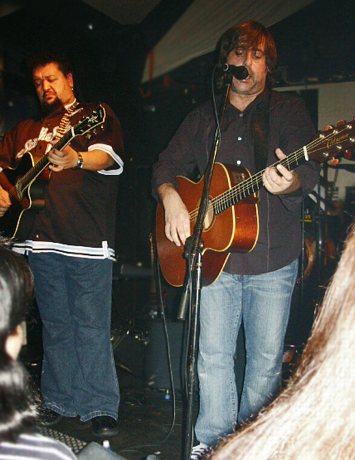 59 yards came belting out as only it should be, the crowd really got into it and joined in with the obligatory singing back part. Then the harmonica came out and after taking on board Ezio's advice as to why you should never put one down your pants, a foot stomping Deeper got the crowd making as much noise as downstairs. It was difficult for the band to play ballads due to the noisy neighbour feud but they managed with the utmost professionalism to play Perfect and Shadow Boxers. An unreleased song, Keep the Lights on got everyone bopping again followed by the old favourite The Further We Stretch (which even has it own dance - a sequence of 4 actions which are not difficult at all but still some seems to get confused!) During the song, we were treated to an instrumental from the guys and showed us again what amazing talent there was on stage. Booga makes it all look so effortless but his capabilities are beyond compare. 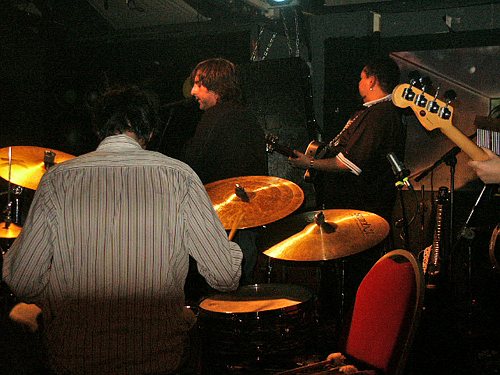 As ever, Ezio himself interacts with their crowd really well, swapping banter and tonight slagging off Peterborough (he can though as he spent many of his formative years here) When You're Strange was requested, he said that they hadn't played it for a long time. Taking her lead from Booga, Lydia played fantastically, just showing again how they all just fit together so perfectly. Go was dedicated to the merchandising lady Lynn (they always remember the important people!). Then that was it, Ezio said thank you and goodbye but Lee's face showed that he was expecting to do more. And despite the noise still booming from downstairs, that's exactly what they did. The crowd was treated to a new song 10,000 bars with scathing lyrics about people who judge people too easily and want you to change. 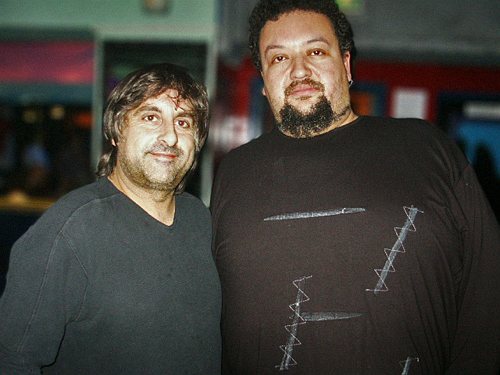 When you hear the shouts from the crowd of "Booga Booga Booga" you know you are going to witness something very special indeed. Not only did he sing Stay with me, fantastically and got the crowd jumping and floor shaking so much, I had visions of us ending up in the middle of the bump and grind downstairs. Booga once again proved that if he and Ezio weren't so talented in music, they would make excellent standup comedians. Booga expressed his dissatisfaction at the venue and the types of people who were causing all the noise downstairs in his own inimitable style. And there is nothing like ending on a high note, which is exactly what they did. 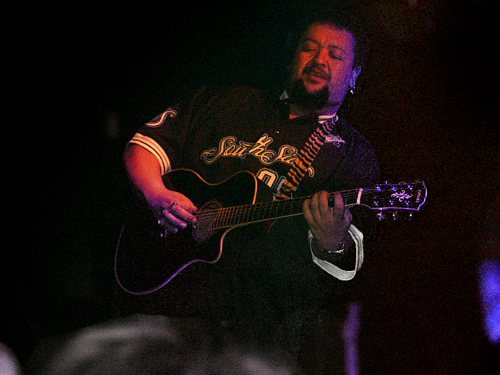 You could tell the band was pissed off with the venue, and I have no doubt that if it wasn't for their links with the promoter, they would have been back on the A14 quicker than you could say bootilicious. However, they showed their professionalism and soldiered on with what was actually, despite the problems, was a fantastic gig. Every one of Ezio's lyrics grab you somewhere, whether it be your heart, your groin or you head, they give you lots to think about and all this accompanied by amazingly talented musicians. You can't ask for anything more in my book.
article by: Sally Booth
photos by: Darren Walker
published: 30/11/2004 12:56