It's March 1st so it's hardly surprising that it's been a while since I've been to a festival but it's never to early to feel that festival vibe. Slamboree and guests were just the perfect antidote to those winter blues and Exeter's Phoenix is the perfect venue to house such shenanigans. People are eager to get in right from the door opening; students, dreadies, arty-types, in fact a broad spectrum of life's people were shoulder to shoulder queuing expectantly for the event. An event which was inevitably sold out in almost no time at all.

All three of the night's acts are accomplished in the art of entertainment but it was for Billy Rowan to start the proceedings. His combination of catchy tunes with a rhythmical vocal style and socially aware, but often amusing lyrics is a recipe that is difficult nail without it seeming preachy or dull but Rowan succeeds where many fail. The night didn't start well though, the opening song was a disaster fraught with unusual sound levels and feedback lasting for about a minute from a rogue instrument. Credit to the sound engineers, they got there act together but it shouldn't have been that awful in the first place.

Rowan is currently recording an album and featured many of the songs from it. They were strong too, with a respectable variety of style and pace. 'Monkey Suit', 'Borders' and 'Girlfriend' are just a few to look out for on a future date and he still had the grace to play 'Money, Money, Money' for keen fans of his earlier work. By the finale of his set Rowan and band had shown their quality and most bands would fear taking the stage after a such strong performance but this was no ordinary line-up.

The Carny Villains raised the energy levels even higher. There are fewer bands that can outplay these guys at such high tempo and with such technical ability. Their music is impossible to sum up in a sound-bite but to say there is a fusion of riotous gypsy, ska-rock, with a dose of a Victorian England storytelling gives a basic image, though the band are so much more. Aside from their own creations such as the wonderful 'Trial of Henry Jones' they aren't afraid to take on other artists in the name of fun and creativity. Whilst Aerosmith's 'Walk This Way' seemed like an unusual choice Reel 2 Real's 'I Like To Move It' was even more left field pick but executed to perfection with additional audience participation. They stepped off to rapturous applause, the audience showing respect for the musical journey they'd taken us upon and on most normal nights this would have been enough already to satisfy payer's of the £13 ticket but there was more to come.

There was still the main act - Slamboree have been growing in name through their festival performances around the UK. Their combination of DJing and live music and circus performance created a massive buzz at Glastonbury, BoomTown, Shambala, and Electric Picnic to name a few and their reputation keeps growing. Their biog lists three things they like; 1) throwing stuff at other stuff, 2) setting fire to stuff 3) playing music. As a mission statement this is a recipe for entertainment. 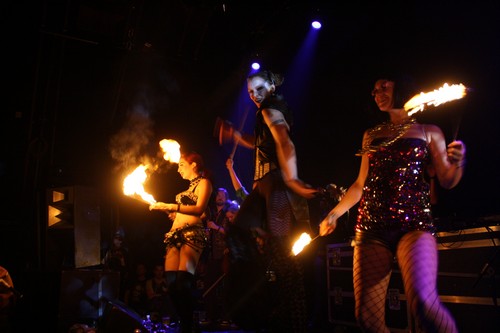 Slamboree took their time getting on the stage which gave me a chance to suss out the fire exits and made the revellers more excited with anticipation. To call the band a 10-piece, would be forgetting that a huge part of the performance is the involvement of acrobats, fire dancers, jugglers and burlesque entertainers making it difficult to know where to look. They're a feast for the eyes in colourful clothes and make-up.

Their singer/MC  Kathika Rabbit - is one of the coolest chicks ever; crazy dress sense, long dreads and an ability to spit rhymes at hyper-speed (although her vocals should have been turned up just a fraction more though,) and trombonist Joe Rogers, dressed as a clown, dancing like a nutter will inevitably draw comparisons with Keith from the Prodigy but he's too good for it to matter. DJ and creator Mike Freear has created an experience with and eclectic mix of techno, funk and drum and bass for the ears and for the eyes there are girls swinging from the ceiling, stilt walking and even a sultry looking beauty with fiery nipples  always interesting. Freear has cleverly taken some of the finest alternative elements from festivals like Glastonbury and packaged them in a commercial form that can easily tour many UK venues. Genius. The question isn't why has this been done but why hasn't this been done before. 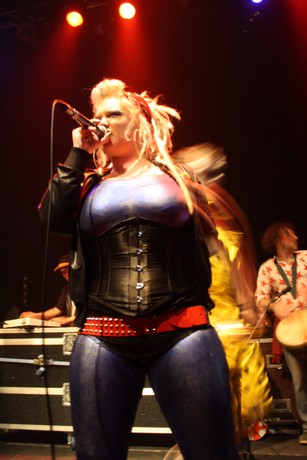 What more can be said, it was a magical night. Since the days of Massive Attack the UK seems to have forgotten the hotbed of talent that lies in the south-west but I think we should thank the world for all that is Bristol based, these artists are were merely a selection of the divine smorgasbord. At some point the rest of the UK will find out what is going on, maybe even the rest of the world so go and see these acts before they become a long range dot on a festival main stage. 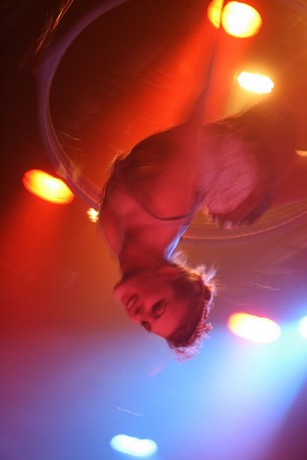