I have said I will never drive around Sheffield again. It is a disastrous maze of one way roads. Even with a sat nav we get trapped down bus only lanes, one way passages and spend forever going back around the Parkway roundabout. Never again. Mean it this time. A 40 minute journey should not take 2 hours (with no traffic). Don't like ranting but it ruins the night before it's begun. 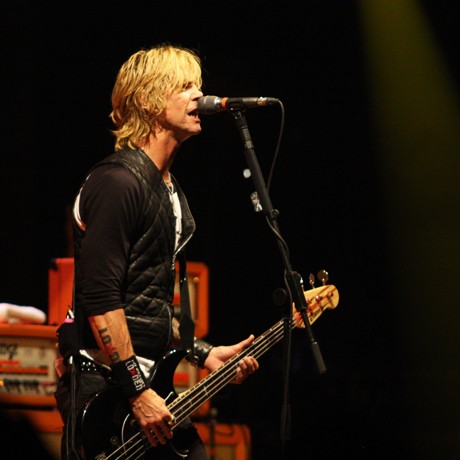 So we miss Duff McKagans Loaded apart from the last couple of songs, which happen to be covers ('Attitude' by The Misfits, and 'It's So Easy' by Guns and Roses). The band seemed to have rallied the crowd up well. And this is no ordinary crowd. Some have not got into the spirit and have come along in normal clothes. A lot of people however have turned up in all manner of ghouly costumes Draculas, clowns, zombies, witches, black cats, manic nursing staff, you name it, it's represented here. There is, you see, a cash prize for the best costume.

My earlier rant is significantly reduced as I realise that I have not managed to miss Ugly Kid Joe's set. This is a band that I grew up with and a big reason I tried to navigate Sheffield again tonight. They do not disappoint. Singer Whitfield Crane is like a kid with ADHD, bouncing around the stage throughout the set. He loves bouncing into the crowd amongst the seats. One man sat on the second row gets a full face of Crane as he bounds towards him and sings full pelt straight at him. The man is uninfluenced by it, so he gets another face full later on. Hilarious. 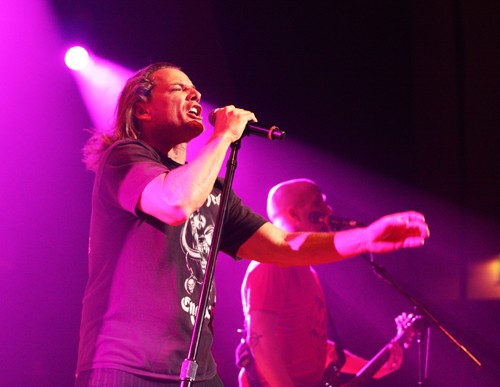 The set is made up of mainly old UKJ tracks from the early nineties, like 'C.U.S.T.' and 'Milkman's Son' from 'Menace To Sobriety' and 'Neighbor' and 'Panhandlin' Prince' from 'America's Least Wanted'. There's a new track from new album 'Stairway To Hell' called 'I'm Alright' which fits in seamlessly with the others. The big hits though are the cover by Harry Chapin 'Cats in The Cradle' (a rare peaceful delivery during the set) and of course they finish with 'Everything About You'. Short but excellent set.

The few fancy dress finalists are brought onto the stage to get the cheering vote for winner of the cash prize. The Addams Family, nunnery MILFS and Jiminy Cricket all loose out to the headless hunter.

The spooky backdrop then drops and after a shower of sparks Alice Cooper appears in a red and black ringmaster's suit complete with his trusty cane (which he throws into the crowd. He must have a whole bunch of them). This is the last show of this Halloween Night Of Fear and they put on an excellent show. 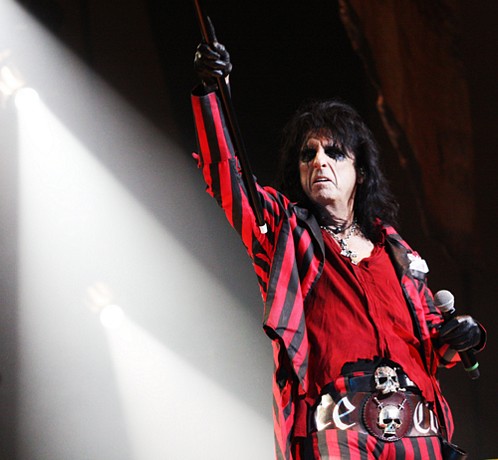 It's not as much a cabaret horror show as a live music show, although there is some acting throughout (like the guitars surrounding Alice wailing for his coffee during Caffeine, and his flirting with female guitarist Orianthi Panagaris. If you don't already know her, she was due to play on Michael Jacksons 'This Is It' tour' she is an amazing guitarist). There are props too, like the coffee cup during 'Caffeine' could fit over your head, much bigger than a Sports Direct mug, and that's saying something. For Billion Dollar Babies he showers the crowd with cash from the end of a fencing sword. Necklaces are thrown out during 'Dirty Diamonds', the snakes back for 'Devil's Food', and Alice still gets put in a straightjacket. The guillotines have sadly been removed from the shows but to make up for it Cooper is strung up like a puppet for 'Feed My Frankenstein'. I hope I'll be able to pull stunts like this (as the Beatles said) when I'm 64.

Alice does like to talk a lot but tonight it's all about the music. There's 24 songs crammed into 90 minutes of hellish fun. With 3 guitarists behind him creating a crushing wall of rock sounds this is a treat for eyes and ears alike. 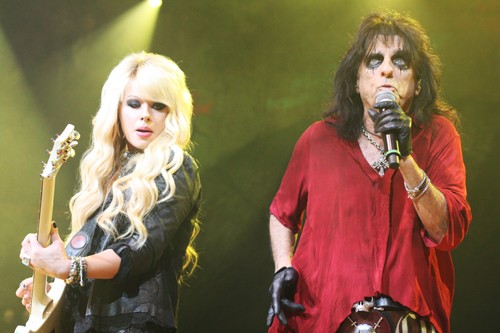 The set is full of covers, especially near the end, from some of the greats. It starts with 'Hello Hooray' by Judy Collins, and continues with the Doors' 'Break On Through (To The Other Side)', The Beatles' 'Revolution', 'Foxy Lady' by Jimi Hendrix and The Who's 'My Generation'. As this tour is also called 'Raising The Dead' these covers are great ways to celebrate the lives of his past friends. One of the few new songs is 'I'll Bite Your Face Off' from 'Welcome 2 My Nightmare' (which makes me laugh at those very lyrics).

An Alice Cooper show would not be complete however without 'Poison' bringing in the encore to finish with lasting anthem 'School's Out', joined by Duff Makagan and Whitfield Crane. Same time next year!

Hello Hooray
House of Fire
No More Mr. Nice Guy
I'll Bite Your Face Off
Be My Lover
Caffeine
Billion Dollar Babies
The Congregation
Hey Stoopid
Dirty Diamonds
Welcome to My Nightmare
Ballad of Dwight Fry
Go to Hell
He's Back (The Man Behind the Mask)
Devil's Food
Feed My Frankenstein
Break on Through (To the Other Side)
Revolution
Foxy Lady
My Generation
I'm Eighteen
Under My Wheels
Poison 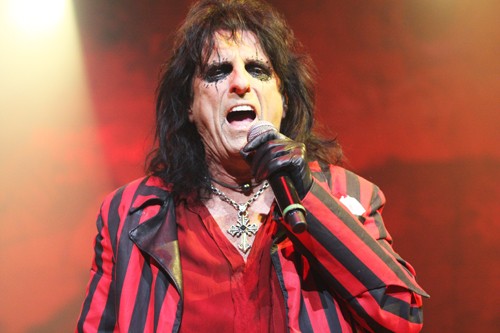