A sell out crowd has gathered in the bar area outside the auditorium at Exeter's Phoenix for tonight's visit of sisters Becky and Rachel Unthank and their band's first night of the tour of the new album 'Last'. The crowd is populated by a diverse age range from small children wearing flower garlands in their hair, to teens, twenty and thirty somethings, and the more familiar (at folk shows) white haired and beardy types.

Rachel Unthank, in full flush of motherhood, bump now clearly showing as she's seven months pregnant greets us warmly and introduces tonight's support act 4 piece Trembling Bells. Founder Alex Neilson is not here tonight, he's away in Europe, and so brother Alistair stands in on drumming duties. Singer Lavinia Blackwall gushes that the band are really excited to be supporting The Unthanks and fronts the band behind her keyboards, alternating between playing those and guitar. The band's fusion of medieval songs and classic psychedelic rock works surprisingly well. 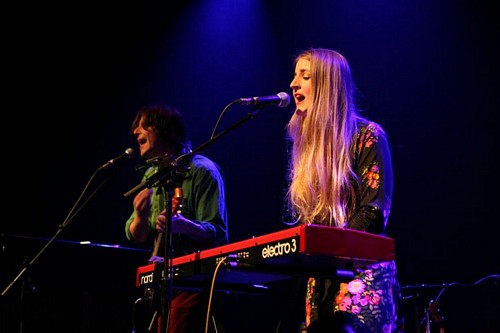 Showcasing songs from 'The Constant Pageant' on sale here, a few days before its release, alongside early works like 2009's 'Carbeath' the band show they've found their tapestry and context now. Mike Hastings (in purple and green obviously) delivers textbook 60's grooves and harmonica depth that gives the music a more west coast summer gilded feel than traditional folk, counterpointed by Lavinia's traditional folk singing style. The scrambled fretwork is verging on far out classic rock, and it's when Lavinia dons her guitar and joins in the guitar frenzy that personally I feel the band excel. The floaty keyboard works best when interplaying the staggered drum beats and I wonder whether with Alex in the fold this could be a better proposition.

The stand out tracks for me are 'Goathland', and 'Cold Heart Of Mine', it would be unfair to give too harsh a review of the band's set, as it's been noticeable with stuttering starts, and miss-cues that they're missing their errant drummer (although the sibling's work was terrific) to add cohesion on the night. That said, what they did deliver, showed great promise, live the dropping of the baroque elements and some of the production from the album tracks make them less fixed in traditional olde England, despite Lavinia's warbling voice, which is not as bad live as I thought it might be. At times the rapid basslines, and indie sonic guitar buzz make them much more a mainstream proposition, a summer of festivals will surely see the band garner a decent following.

There's a hubbub of excitement about the crowd, good spirited and bubbling with anticipation as we wait the 15 minutes or so until The Unthanks take to the stage, to showcase last week's new album 'Last' with only the Northumbrian Minstrelsy number 'My Laddie Sits Ower Late Up' missing from the set, which also sees an airing of 'Cuckoo Madame, 'Great Northern River', 'Sad February', and encore tunes, 'Fareweel Regality', and 'Blackbird'.

Tonight's show starts under low lighting with the four piece string section slowly introducing the album title track, they're joined by Adrian McNally on piano, Lizzie Jones on trumpet, and drum and bass, fronted by the two Unthank girls Becky, and Rachel. The gentle song is warm and endearing and the lyrics are perfectly crisp and clear, their Northern timbre perfectly captured. 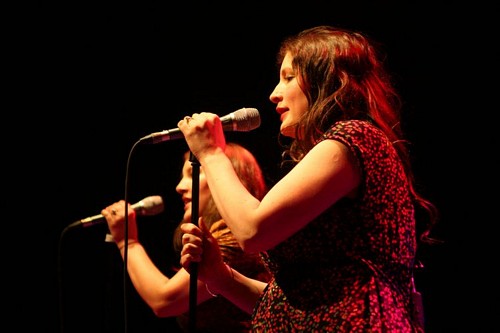 Chris Price and Dean Ravera (from The Stands) swap drum and guitar or bass duties throughout the night, and the second song 'Queen Of Hearts' is a majestic swelling of strings and vocals, more akin to something Elbow may have produced, and already the audience are captivated. It's a wonderfully constructed song, with the lone horn punctuating the melodies. The crowd love it, Rachel and Becky take the time to explain the origins of each song, and whilst this is an old traditional song it would seem that the band are in good company as Joan Baez has also covered it.

'Lucky Gilchrist' is tonight's first departure from the new album, the track from the album 'Here's The Tender Coming' brought the band new fans when it was aired a few year's ago by them on Jools Holland's show. Tonight, it's sumptuous with violins and vocals swelling and ebbing, and the pair's voices dovetailing perfectly.

Of course no Unthanks show would be complete without some clog dancing, and Becky obliges swapping high heels for clogs. Alistair, the stand in Trembling Bells drummer joins them on drums, and we're told the story of the song, mother to be Rachel explains enthusiastically when prodded to get on with it, that, "I haven't told these stories before, it's the first night of the tour."

At seven months pregnant she's also unable to join her sister clogging, and Becky's even thoughtfully asked for Rachel to have a chair on stage so that the radiant singer in full flush of motherhood can rest during the near two hour set. Some songs are unfamiliar and 'When I Was Young' is an example, dedicated to Becky who has just got engaged, the two lasses sing it unaccompanied.

The band's take on Tom Waits' 'No One Knows I'm Gone' is wonderfully delivered, and reminds me that tonight's full moon is the closest it's been for nearly 20 years. The unearthing of musical gems continues with Jon Redfern's melancholy 'Give Away Your Heart' the string section becoming backing vocals for the lilting lament. It was penned by Redfern in reaction to the country going to war in Iraq, how timely as tonight the first bombs fall on Libya. 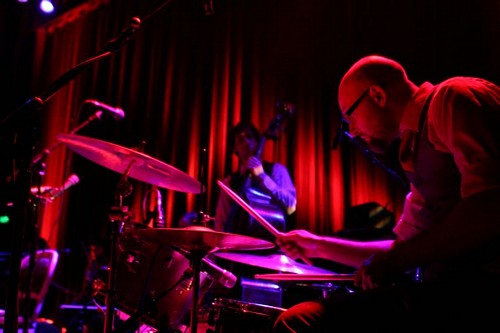 The next two songs showcase both the band's recent past and the potential future, coming from side projects which could both be touring in future, although it's unlikely they'll come this far south gybes McNally. The first is 'Cuckoo Madame' from their Union Chapel showcase 'The Unthanks Explore and Perform the Music of Robert Wyatt and Antony and the Johnsons' a difficult task they set to deliver the Wyatt track stripped down and I don't feel it works, although it does show the group can easily stray through jazz territory. The second 'Great Northern River' comes from their 'Songs From The Shipyards' project where they worked with old film footage, and the band are reduced to half their number for the slow meandering piece. It manages to hold the audience, just, but leaves them noticeably fiddly and self conscious, an unnecessary risk in the set I feel. I also have to say that both seem a little self indulgent, and break up the flow of tonight's set, taking us perhaps too far from the usual direction of their music.

They return to more familiar territory with ukulele, and lively clog dancing from Becky, and what's remarkable is how they've taken these new songs and made them sound like they've been singing and performing them for years. Few around me can believe this is their first public airing. Remarkable too, is how well they fit into the Unthanks canon. 'Sad February' is the only nod to their last album, 2009's 'Here's The Tender Coming' and includes a high heels solo. They close the album visit with a track suited to those of us with Cornish tinners in our blood, Alex Glasgow's line "Piles of bones buried beneath a mile of stone" from 'Close The Coalhouse Door' still pertinent today with what has happened in Chile and New Zealand bringing the words bang up to date.

'Starless' is a surprise - a King Crimson cover, chosen by McNally, for having "the most beautiful melodies ever written, hidden in the pomp of prog rock." The song goes down well with, it would appear, a lot of Crimson fans in the audience, although I would prefer to think the applause is for the well wrought delivery from the band.

The encore is a rare treat, 'Fareweel Regality' from the sisters' Winterset days, a song they've not played in ages, reveals Rachel. Price returns to the ukulele for 'Blackbird' also from 2007's 'The Bairn' and the two songs reveal just how far the girls have come in five years. They're no longer confined to the genre of folk really, they offer something from a much wider palette, the final songs are familiar Unthank territory, and that makes me realise we've been taken to other realms tonight, and it's been a masterfully steered set. 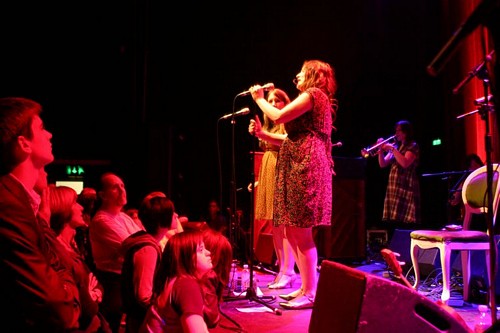 With motherhood fast approaching this tour only lasts until April, but what The Unthanks have put together is an album and live show that takes us on a fantastic journey, and only at the end do we truly realise this. It's much more modern than the traditional songs would appear on paper, and if the album is as good as tonight's show then it must surely be a contender for folk album of the year, certainly tonight's performance is varied, engaging, masterful and surely a bookies favourite for live 'folk' show of the year.