talking next year's festivals, the last Underworld only shows for some time, and more on Mon 22nd Nov 2010

eGigs spoke to Karl Hyde lead singer and co-founder of Underworld ahead of their UK tour dates which bring their current tour to a close.

How are you?
Really good thank you. We're in Eindhoven after a crazy concert in Ajax Stadium last night. It was a crazy night and here I am sat on the bus.

You're finally returning for a string of gigs over here.
Yup, we play Brixton Academy on Saturday, we're on the home stretch now.

How did it feel to be dubbed the future of music, by the music press in the mid Nineties?
(laughs) Oh gosh, you've got to love them haven't you! You've got to love those labels, we've always loved that label, because it's always given us a place we can move away from (laughs).

Early on in your career you did some material as Lemon Interrupt how do you look back on those days?
Well in the Eighties, Underworld mark I put two albums out with Warner Brothers. The Eighties was rubbish, I don't look back on the Eighties with any fondness whatsoever, we lost a load of money, we made a lot of really bad decisions, we played a lot of very dubious music, and put our four dodgy albums in the Eighties, which having said that, led us to turn our backs on a lot of ideas that we'd based our careers on, not very well, and missed it was dance music we'd been trying to make all along and had a great time from then on. So, as much as I have no fond memories of the Eighties if it wasn't for the terrible mistakes that we made, we would never have had the career that we've had for the last 20 years.

Coming bang up to date what's your favourite track to play from latest album 'Barking'?
Ah, you know, I never do that. It spoils my night when I'm playing them out, I love playing these tunes out, and on various nights I will love one differently to another, depending on how it goes down with the crowd. I always try to switch my head off, turn up the crowd, get their vibe and get with their flow.

You were on the Experimental Music Stage of Glastonbury '92 was that a forming moment for you?
It was yeah. A lot of the people we work with now were part of that crew. We formed a group called 'The Experimental Sound Field' with people like Funktion1 Soundsystems, and Shiva Photonics light projections, and working with the early Ambisonics, Surround Sound, inside of a big quadraphonic soundsystem and Michael Eavis very generously gave us our own field then, and we played for eighteen hours. I can remember Rick and I looking at each other and going that's the blueprint for the band, that's where we want to go.

Any chance of you rockin' up there next year?
There's been mention of it, (laughs), it would be nice, it would be nice to play places like Glastonbury because weve got such fond memories of the Experimental Sound Field, playing the main stage with The Manics at the end of the Nineties, and a lot of good times we've had at Glastonbury going right the way back into the Eighties, with our first group. We played there in '83 in a tent, so we've been going there for a long time and it's a wonderful space. I think what Michael and his family have done there is extraordinary.

Any other festival dates you've got lined up for next year?
Yeah, yeah, there's a lot, I saw the initial sheet which is all kind of pencilled in and there's a lot. It's going to take us all over the world again. There's a lot of countries that we're going to need to visit once more. I just can't say what they are yet, because it would kind of annoy some people back in the office.

You've played a lot of gigs over the years what's been your most memorable?
I've had a lot of playing memorable gigs, playing dance music is an extraordinary thing because around music like this people come to celebrate and have a good time, and there's nothing shallow about people having a good time, it's a really positive thing, particularly in these times, for people to come together and have a good time.

So playing dance music has got a lot of really good memories. I remember all kinds of things. Small gigs, like the Glasgow Barrowlands which is one of the greatest venues on earth, through to gigs which were drenched in rain and people were standing in mud like we have done at many, many festivals and yet they've still got smiles on their faces.

All kinds of things, I just find that making dance music and playing it out live in the way that we do attracts people who have such a fantastic positive energy about them, that it makes it one of the best jobs in the world.

Who has been the best band you've bought a ticket to go and see over the years?
Jeez, gosh! That's a tough one. I think it would have to be people like Prince. He must be one of the greatest performers alive on earth. He still blows me away, fabulous! I was fairly fortunate to be recording at Paisley Park when he was putting the New Power Generation together inside a rehearsal studio, and I was able to listen to them jamming for weeks on end, and that was an extraordinary experience. To meet Sheila E and the whole kind of crew out there, and then, to see them out on the road live, he is a phenomenal, phenomenal musician, and going to see one of his shows is just the best experience.

And when you go on tour what's the essential item you always take with you?
(laughs lots). Plenty of food. That's really important, catering is the centre of the universe. It's where you sit down with the bus drivers, and the truck drivers, and all the riggers, and meet everybody and be part of the team. We've never been a band that went off into the rarefied atmosphere of the green room, or the backstage VIP nonsense. We've always been the band that's hung out with the crew and travelled with the crew, and catering is the place where you can all get together, and meet, and talk, and hang out. And, that's really important, we love food! (laughs).

You've done work with Eno and Mark Knight's Toolroom what was that like?
We're still working together. We're working on quite a lot of projects, there's several albums being remixed as we speak for release from the work that we've done (with Eno), both with our ensemble 'Pure Scenius' where we played Sydney Opera House and again in Brighton. There is hours and hours of material there, and I've also recorded about 18-2o hours of material just between the two of us. There is a lot of material still to come out, and once we've finished this tour, I'm going to go back into a studio and continue the projects we've done together. We've done spoken word together he and I, and I really like working with him, and as a kid he was a hero of mine, so quite a lot of what we do has assimilated his philosophy in a studio. So, working with him is kind of second nature now.

Lastly, if you had two months off, starting in the morning, what would you do with it?
I know exactly what I'm going to do, because it's booked. It's a fantastic project the Rick and I are recording through December and January which you will know about soon. We're really, really excited about it.

Underworld play Manchester Academy on Thursday, Glasgow Barrowlands on Friday and RDS Simmonscourt on Sunday to end their current tour, and Karl says expect some festival appearances to be announced for 2011.

eGigs will have a review of Underworld at Brixton Academy gig online shortly. 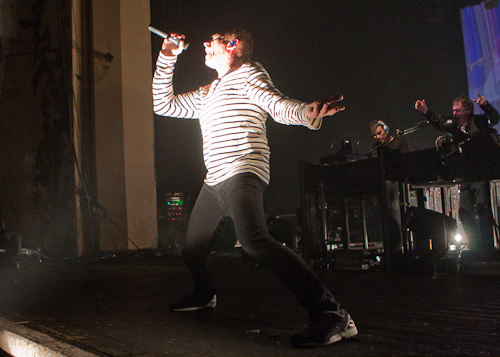