Duff McKagan talks to eGigs about his own solo punk rock project Duff McKagan's Loaded. He's been doing a ton of press for days he tells me.

The hard hitting Seattle four piece are fronted by the the former Guns N Roses bassist and also currently playing with Velvet Revolver. The band released their debut album 'Dark Days' in 2001. And whilst they continued to play every year and now the second album 'Sick' was released earlier this month. The band's 'infamous' Webisodes featuring footage from the recording sessions for the group's new album are well worth watching. Duff McKagan's Loaded return to the UK to play Download festival, and will be touring the UK in late 2009 also. 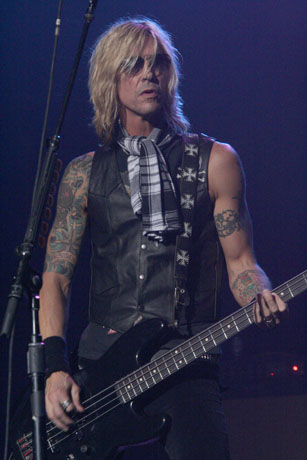 Hi Duff, what are you up to?
You mean you don't know?

I know you've got a band together, and a new album out, I meant have you guys been playing live, gigging?
We've got the album out here in the States, so we've been doing a gig, a bunch of gigs. There's a show, an old time radio show, called 'Rockline' it's syndicated around the United States and it's these old school DJ guy Bob Cobhurn with really low voice, he's been on the radio since I was a kid. He has a show where you actually play live, electrically, a really good studio and it sounds killer if you're good. So, I'm really nervous about playing that.

Then we're playing The Crocodile in Seattle which is club where all those bands in the nineties got their start, and became famous. But it closed down a couple of year's ago out of nowhere. So Sean Kenny (???) from Alice In Chains put some money in with some other investors and they did the place back up and the opening for our record release was just killer. We're rehearsing a lot of the time here in Seattle and doing a ton of interviews.

Are you still doing stuff with Velvet Revolver or is it on hold at the moment?
Well we don't have a singer. We've written all the material but we're still looking for one. We're waiting for the right guy to come in but for sure we don't have him yet. We've worked with a couple of guys, but they're got to be 100% behind us because for all we do, we've got to go to war together. There's been a couple of guys, man, I thought were perfect, but we'll find the right guy.. They've got to be great, not just good.

Maybe you could hold auditions at Download, and get a Brit to front it?
Yeah, no kidding right. I'm looking forward to Download man.

I thought you might be, what do you like best about playing there?
It's funny, I don't know if you know about the humour of Loaded. You should check out some of our webisodes we've made. We definitely have a sense of humour, so we made this webisode, blog whatever you call it for the Download site. I was talking on it, and I suddenly realised I was playing Download when it was called Monsters Of Rock. That was the first time I played there in '88, and that's the black and white portion of the 'Paradise City' video of course, and I've been there a couple of times with Velvet Revolver, so this will be my fourth time. Things like this I don't realise until I'm forced to talk about it.

Okay I played it 21 years ago, it doesn't make me feel old, it just doesn't seem like 21 years ago. 21 years! I mean my eldest daughter is only 11. It seem like her life has been really long.

Have you got any other festivals planned for the summer?
Hell yeah, all of June, we're playing Rock am Ring, and Rock im Park, we're doing a bunch of European festivals, I don't think we're doing that many UK festivals, although we're beck in the UK at the end of September to do our own tour like we did last September.

With the Loaded show, is the performance only the songs from 'Sick' or do you do some covers as well?
There's no covers on the album, not even for a B side, but when we play live there's a few covers. We do the odd JuJu song, we've been known to do 'Purple Rain', throwing it in randomly in the middle of a song, or 'T.N.T' if you see us playing 'T.N'T' or 'Purple Rain' you know we're having it pretty good.

You play guitar again with Loaded have you always played guitar?
The first band I was in was called The Veins and I played bass in the band. It was my first experience, then I played drums in the early Eighties in a touring punk rock band, but then I also played guitar in another band. When I was sixteen, seventeen, the the band became One Minute Warning I switched to rhythm guitar, then heroin hit Seattle in about '83 and by '84 I knew that because heroin had so enveloped Seattle that if I wanted to stay in music I had to leave so that's what I did.

But I was a guitar player at that point, so I flew down to L.A., there it was Eddie Van Halen, and Yngwie Maelstrom guitar players and I was a Johnny Thunders/Pete Jones guitar player. So I knew I couldn't really compete, and nor did I want to compete with that kind of stuff. So, I came down and got a job in the first hour I was down there, and met some dudes through an add in a newspaper, and that was Slash, and Steven. I decided if we were going to form a band, I was going to be a bass player, a proper bass player, I wasn't going to mess around anymore.

I made my own record called 'Believe In Me' and played drums, guitar, bass and vocals, and played everything in 1993. I played guitar in the mid nineties with Steve Jones. Every song I've ever written whether with Guns, VR, or Loaded has been done on guitar.

Did you write all the material for new album 'Sick'?
I did not, no. Loaded is a band that I did start ten years ago. I guess I set the tone for what the band was going to be like, with some of the songs I wrote back before the first record. But, it's definitely a band band where most of the songs are written as a band. In my experience the stronger songs that I've ever had a part in have been written with band.

What's my favourite off the album?
I don't know, there's a song called 'Mother's Day' that I really like. It's a different kind of song, it's not a straight up rock song. It's kind of melancholy, dark, a song about addiction. 'I See Through You' is the song that I really love to play live.

Is it true that you're writing for Playboy as well, how did that come about?
It is true. Well I've been writing a music column for The Seattle Weekly since last summer which goes out everywhere, obviously. From that Playboy has asked me to write an article on the state of music business a couple of months ago for the magazine. Then they were kind of re-vamping Playboy.com and they offered me a gig. I'm the financial columnist for Playboy.

So for the state of the music industry, how did you say it was? what was your summation?
Well, you know it's changed. It's changed so much. Back in the late nineties, probably as far back as '98 even a tour was to promote a record. You'd take a lot of time to tour, people were selling so many records, you could go out and tour, and the tour was an advert for your record. Now it's the complete opposite. People aren't selling records, so to sell a record you've got to get as much marketing as possible from the record label, to sell tickets to your tour. Bands are touring much leaner, tying to squeeze as much money as they can out of T-shirts, and the gig itself is the main thing. There's no staying in expensive hotels, if they're staying in hotels at all. Those kind of things you are cutting back on, so you can eek a profit out of a tour. Which is totally doable, but you have to be real smart about what you're doing.

Do you think it's hard for new bands than when you started out?
I don't think it's harder, it's different. Shit man, it was hard when I started out, it was punk rock days when I started, it was do it yourself, it's kind of like it was then. When I started touring and doing gigs in 1979, when I was 13, everything was do it yourself. There was no internet, we didn't have email where you can stay in contact with other kids in other towns. It was all phone booths, with coins, and you had a list of phone numbers of punk rock houses around the country and that's how you'd book a tour. You'd call the punk roc house and hopefully someone would answer, you know. Say who you are, and ask if there was a gig which hopefully you can play.

Thanks Duff my time interviewing you is up. Have a good one at Download.
Thanks, bye.