There are some bands working today that get far more acclaim than they deserve, and it is difficult to see how they manage to sell records. There are also bands which deserve to register far higher in the public conscience. The Cooper Temple Clause fall squarely into the latter category. Somehow managing to fly below the radar of mainstream recognition, TCTC bring their grandiose, imaginative brand of psyche-rock to Middlesbrough's intimate Empire, and proceed to blow the roof off.

Prior to the Reading five piece's explosive set, we are treated to a couple of excellent support acts. My Architects bring a new slant to the student friendly geek rock aesthetic, and they deserve a special mention for managing to pull off a fantastic cover of Underworld's 'Born Slippy' and making it their own.

Howling Bells are a female fronted four piece, reminiscent of the husky mystery of the very best of Portishead. Singer Juanita is simply mesmerising, and their is an Empire full of indie boys slowly falling in love with her for the duration of the set. Everything is right, and for a moment or two I am seriously worried that The Cooper Temple Clause are going to be overshadowed.

I needn't have worried though. The band fire off the opening shots with new track 'Head', and from then on in, the salvo continues unabated. 'Been Training Dogs' is heavy enough to make Motorhead jealous, and 'Filmmaker' is awesome. By this point, the venue is bouncing, and we are grateful for a chance to relax a little during the stunning dedication to fate, 'Blind Pilots'. It doesn't last long though, as towards the end the songs kicks in so hard it hurts, and the whole room is bouncing yet again. New songs 'Damage' and 'Waiting Game' go down just as well as the older material, and it bodes very well for the new album. 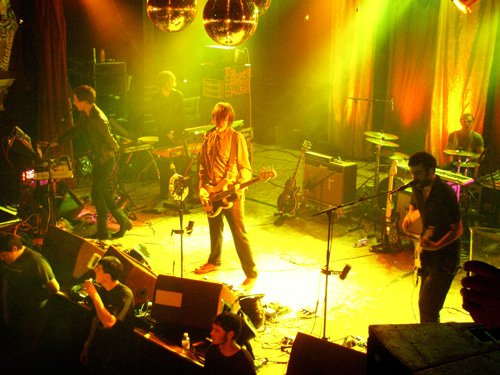 Having lost bassist Didz Hammond to Dirty Pretty Things, the band share bass duties throughout the gig, and all perform well, although some better than others, with Kieron Mahon looking severely uncomfortable at times.

The Coopers' fans are divided over the new take on old song 'Panzer Attack' however. It is the final number played tonight, and whereas the recorded version is a furiously heavy stomp through the post-punk landscape, the new live version is a much more ominous affair. It slowly builds from Kraftwerk style synths, teasing the crowd with the break which never really materialises until the final verse. In my opinion it works stunningly well, but I can see why purists might not be as impressed.

The question has to be asked, why are The Cooper Temple Clause still playing venues this small? They have the presence and the tunes to fill much bigger venues, but it has never really happened for them. For those of us in on the secret, we should be thankful, but I can't help but feel sorry for everyone who is missing out on a very exciting live experience.
article by: Tommy Jackson
photos by: Tommy Jackson
published: 12/06/2006 09:29