This gig was never going to be the most groundbreaking, and the sparsity of the crowd is proof that there weren't many people who held much expectation for this low key event. Billed as the 'American Troubadour' tour, it was simply Dick Valentine, of Electric 6 fame, and an acoustic guitar.

Before the main attraction, we were treated to The Restaurant, a very enjoyable slice of 60s style surf pop. The vocal harmonies and plodding basslines got everyone's feet tapping, and put a smile on the faces of everyone listening. It wasn't anything new, but it was performed very well, and you can see these guys playing some great Sunday morning festival sets this summer.

Then came Dick Valentine, or at least, the person we were told was Dick Valentine. Without the pomp and show of Electric 6 he is a different person. Opening with the words 'Good evening Newcastle, I am the Arctic Monkeys, and I'm the future of music', you couldn't help but take an instant liking to him. 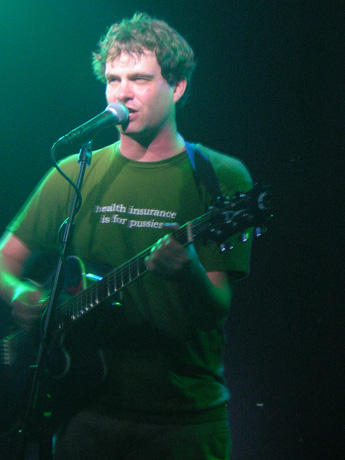 The show was very basic, with hardly even a lighting change to speak of. Dick played through most of the well known Electric 6 tracks, including 'Dance Commander', 'I Invented The Night', 'Future Boys' and the very well received 'Jimmy Carter', all of which coming across well despite the simple instrumentation, which is testament to the often derided quality of the songwriting. The highlights of the set though, were Dick's interludes. He is a very funny man, and at times this felt more like stand up comedy with an acoustic guitar. He was also not afraid to pull people out of the audience to help out on a couple of tracks. 'Night Vision', a new Electric 6 song, was accompanied by three male volunteers singing falsetto backing vocals, and for his performance of 'Gay Bar' he invited around half the crowd to accompany him onstage, much to the horror of the very bored looking security personnel.

As expected, this wasn't anything revolutionary, but it was very interesting, and very funny. Dick proved that even without a band behind him, he can give the fans a good show. It was also very refreshing to see a well known performer who doesn't take themselves too seriously, and for that he must be applauded.
article by: Tommy Jackson
photos by: Tommy Jackson
published: 04/05/2006 07:56

more about Dick Valentine
more about The Restaurant
more about O2 Academy (1 & 2), Newcastle upon Tyne