Tonight the “merrie” city of Wakefield plays host to Subhumans. The most sincere anarcho-punk band to have ever been spawned in the British Isles. Our venue is Vortex bar (formerly Players Snooker Club). The old school punks have come out of the woodwork for the spectacle but there are plenty of fresh, young faces here too. Good to see.

Homegrown reggae punkers Skiprat are our show openers. This band has been a festival staple for many years and it shows in their performance.   They play a short set which is slick, well rehearsed and groovy. If ever you get the chance to see them, you should. The songs are original, quirky and humorous as well as being extremely danceable. Quality. 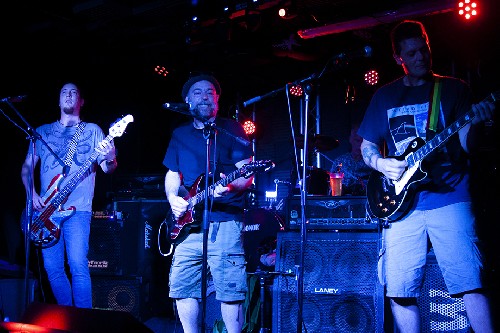 Next up are another local band, The Krayons. The band describe themselves as “Fast, Raw, Hardcore Street Punk” and I would say that description fits pretty well. A 3 piece ensemble with face-melting guitar noise, warp speed bass lines with hidden intricacies, power house back beat and angry vocals. Their set is energetic and relentless, albeit short. There is a problem at the sound desk though as the drums seem to be overpowering the subtleties in the luscious bass lines. The band notice as do much of the audience. It doesn’t ruin the performance, far from it, but it is worrying to me as I fully expect the main event to take the evening up a notch or two in terms of volume so we need that PA sorting pronto. 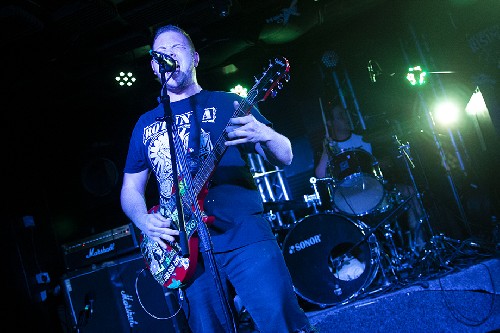 Thankfully, Subhumans asked for another sound check before they begin. A wise move in my opinion. This unscheduled levels check does nothing to interrupt the momentum of the evening. If anything, it helps build a little more a little more anticipation. I love Subhumans and I’m honoured to be in the same room as them, so barring a power cut, I know I’m gonna love this show. However, we want the sound to be as good as possible. The sound staff quickly reconfigure the desk/levels and all is good once again. 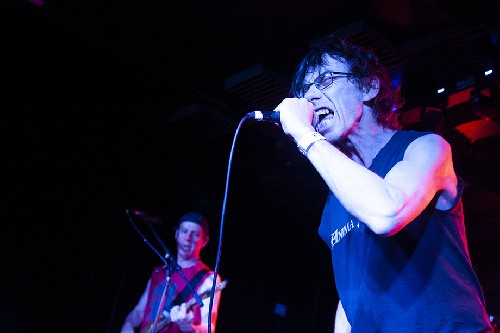 For those of you not familiar with Subhumans, let me give you a brief history.

The band formed in 1980 in Wiltshire, England. Releasing their first EP “Demolition War” in 1981 on Spiderleg Records. Their first LP “The Day The Country Died” was released in 1983 (also on Spiderleg Records). Considered by many to be the finest example of an anarcho-punk album. 1984 saw the release of the LP “From The Cradle To The Grave”. Noted for it’s title track that clocked in at 16 minutes, 53 seconds. By the end of 1985, the band split but left us with their third album “Worlds Apart”. Subhumans dabbled with reunion shows in the early ‘90’s and by the end of that decade had reformed into a touring band and even released a new EP “Unfinished Business”. Subhumans are still touring to this day. In 2019 they released the album “Crisis Point”. Proving that this band is still vital, creative and relevant. At least to me. 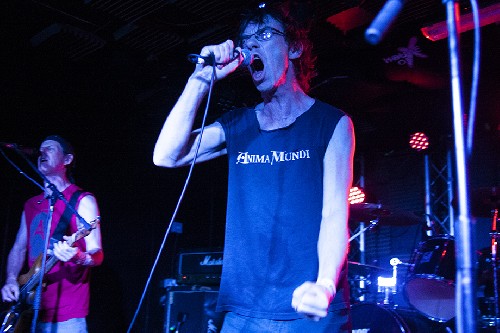 Back to tonight’s show. The band open up with “Big City” from the EPLP record. Instantly the mosh pit develops. People are bouncing around in a vicious yet friendly, faux mass-fight. Brilliant. Dick (Lucas, Subhumans singer/songwriter) sings “No no no it’s too shitty, I don’t want to live in the big big city”. Brilliant.

I feel lucky and privileged to be here witnessing this show. The band is loud, fast and full of passion. I’m impressed with their playing. These guys are no spring chickens but they have a youth full, optimistic energy that is not always present in punks half their age. The next song is Evolution. A song that explores animal cruelty for human benefit. Dick often narrates between songs. Offering anecdotes and explaining song meanings. For us in the mosh pit, this is a welcome few seconds to catch our breath and take a sip of beer (most of which is ending up on the floor). 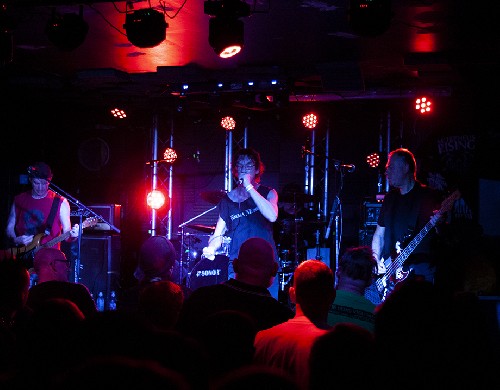 I love this band and everything they stand for. Dick Lucas to me is like Jello Biafra without all the contradictions and hypocrisy.   The band plays a blistering set, which is relentless in its intensity. Quite soon the whole room reeks of fresh sweat. Honest, sincere, anarcho-punk sweat. The room is not packed but every face I can see is transfixed on the stage. I’m proud of the Wakefield punks for embracing this legendary band. The vibe in the room is just awesome.

The band deliver tune after tune with equal passion and ferocity. Musically, Subhumans have hidden subtleties that set their sound apart from other punk bands. There are the expected power chords and riffage but always present is something unique in the guitar playing. I can’t quite put my finger on it but my ears can tell there is something special here.

By the end of the show, most of us are damp with sweat, tingling with adrenaline and in need of a nice sit down. All in all a brilliant show. The band are spent but the crowd is so very happy with what transpired. If you ever get a chance to see this band, please, do yourself a favour and go. Don’t think for one minute that Subhumans rely on nostalgia to be a viable live act. They are more relevant than ever. The feel fresh and vital and they will play their hearts out to entertain you. Long live Subhumans.

Reality Is Waiting For A Bus

Too Fat Too Thin