Crossfaith have spent years building a strong reputation for being a high octane live act and with new music on the way the band are on the road once again to maintain said reputation. Tonight their tour finds them in a cold and wet Norwich playing the city’s Waterfront venue. Joining the Japanese headliners on the bill are Ocean Grove from Australia along with Brit duo Black Futures.

It’s the hotly-tipped natives Black Futures who are first up to entertain the crowd. Having caught the band a couple of times last summer, I knew that the venue was in for a treat and the duo didn’t disappoint with an anarchic opening set. I was also aware of their custom to be joined onstage by individuals dressed in what are best described as hazmat suits. Anybody catching them for the first time however probably assumes that they are slightly overreacting to the ongoing coronavirus outbreak!

No matter what the audience thought of the look, they surely leave with a new band to follow. Black Futures performance is short but very sweet as they demo the likes of ‘Me.TV’, ‘Riches’ and ‘Tunnel Vision’ from their brilliant debut album ‘Never Not Nothing’. It’s a performance full of energy that get’s the crowd warmed up for what’s to follow. As the duo close their set with ‘Trance’, I’m once again left believing that Black Futures actual future should be very bright.

Up next are the Aussies, Ocean Grove, and whilst not being a band that I’m personally familiar with, Ocean Grove is a name that I’ve noticed mentioned rather a lot lately on social media. A sense of intrigue therefore accompanies me as the band take to the stage for a chaotic performance. It’s a good chaos however as they get the crowd moving to tracks such as ‘Sunny’ and set closer ‘Ask For The Anthem’. It’s a decent if slightly underwhelming performance that fails to live up to the intrigue on a personal level. It must be said however that the crowd tonight react to the band as if they were in fact tonight’s headline act, so they must be doing something right. 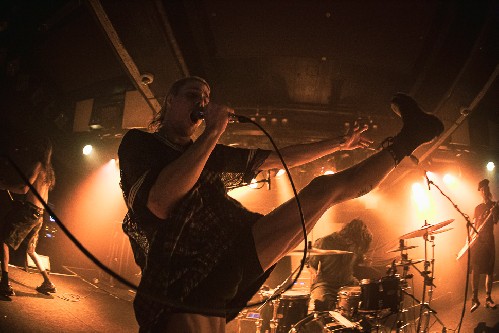 Our actual headliners however are the excellent Crossfaith. Crossfaith are another band that I have personally witnessed live on numerous occasions and therefore knew what to expect. What’s that you ask? Well, in my humble opinion one of the most energetic and enthralling live acts on the circuit. Playing for barely an hour, a Crossfaith show isn’t the longest but is non-stop, all-out intensity.

Tonight both the band and the crowd are full of energy and this makes the set disappear in a flash. There is plenty on offer in this time however as the band showcase songs both old and new. Crossfaith have been mixing up their setlist each and every night which helps to make the show feel unique. Tonight’s highlights include fan favourites ‘Jagerbomb’ and ‘Countdown To Hell’, alongside newer tracks ‘Freedom’ and ‘Endorphin’. We also get the traditional cover of ‘Omen’ by The Prodigy, which tonight on the one year anniversary of Keith Flint’s untimely death feels extra special.

By the time Crossfaith finish their encore with ‘Xeno’ and ‘Monolith’ the band have managed to once again reaffirm my belief that they are a live force to be reckoned with. Thankfully the band has been teasing the release of new music sooner rather than later, so hopefully another chance to catch this brilliant band live won’t be too far away.