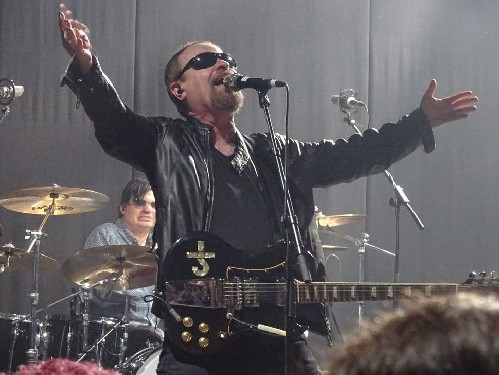 Having turned out for a number of post-punk 40th anniversaries of late, and finding those improbable enough, it was sobering that Blue Oyster Cult have gone a full decade further, having plugged away for an extraordinary fifty years. Back in the day, this was a band of mythical proportions – not exactly huge so much as unknowable and magnificently remote for kids like me, used to pogoing to Feelgood or the Damned down the Pink Toothbrush in Essex. No one was called Buck Dharma in my town, and no one dressed like that, or sounded like that either – a weird cocktail of psychedelia, Space Rock and glossy production. Along with Rickman Wakeman, the Enid and Camel, these were the records I shamefully tucked behind the Clash and the Buzzcocks. I may have secretly never stopped loving them, but it became unfashionable to say so -  is it any wonder that the album releases stopped shortly after the turn of the last century?

Blue Oyster Cult will always be rock legends to me, so I’m surprised that the opening night of their tour is in the lower common room of UEA in Norwich, but I‘m also wondering just who exactly is coming to see a fifty year old band that hasn’t released any records in nearly twenty years. The whole of Norwich, would appear to be the answer, judging by the queues to get in – the longest I can ever recall at the venue. While all generations are represented, there’s a healthy contingent of youngsters who wouldn’t have been born when BOC were about. They jabber away excitedly and entirely unconcerned how cool/uncool the band is, and there’s something very satisfying about that. Why everyone has turned up so early it is hard to say, but if it is to hear the support band they were in for a disappointment. On stage a ridiculous five minutes after the doors opened I, along with a good proportion of the punters, heard half of the Temperance Movement’s set from outside in a snail’s pace queue, and that’s a great shame for a band that deserved more respect. Having had little time to settle in, I have to judge the band by the rapturous reception that was all about me, and they were certainly accomplished performers, with shades of The Verve blended in with faux Americana, notwithstanding their British roots. Whispered into my ear at one point (I can’t take credit for the insight) was the observation that this is what Britpop would have sounded like if they’d stolen off of the Stones instead of the Beatles, and I think that’s about right. 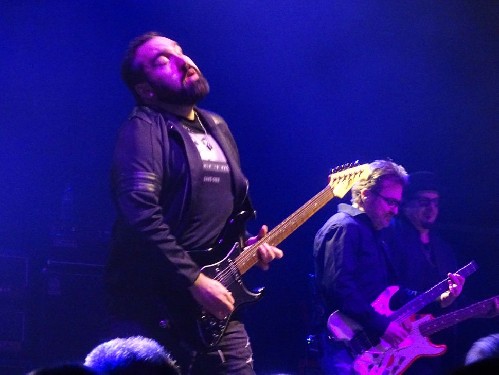 The evening’s headliners, as ringmaster Eric Bloom was quick to concede, got off to an uneven start – this was, after all, the first night of the first UK tour in an age. In hindsight, something better attuned to a UK audience than Before the Kiss and Dancin' In the Ruins might have served them better after Dr Music set the scene, but once crowd-pleaser Burning for You started up it felt like the band had worked out what sort of BOC the crowd were looking for. The heavier sound of the early 80s was always going to be the answer, and while we did hear the MOR Shooting Shark it was surely significant nothing released afterwards was played, while earlier material was given a heavy  makeover, so by the time we got The Vigil, the band were comfortably into their stride. Bloom was very much the master of ceremonies, notwithstanding his gracious deference to Dharma’s prodigious noodling, though newcomer Richie Castellano (he’s only been with the band for 15 years) increasingly made his presence, and his musicianship, felt.

Shortly after Buck’s boogie, an ersatz mid-set jam showcasing how sharp he still is, it was becoming apparent that certain numbers would be noticeable by their absence. So no Black Blade, no Joan Crawford, no Veterans. It is their train set of course, to play with as they will, but I wonder if the set list (largely unchanged from recent US dates) would have benefited by a shift of axis towards the heavier, Martin Birch influenced, records that found favour in the UK. Cultösaurus Erectus was, after all, by far the best selling LP here, yet I do not recall hearing anything from it. That said, we did get Godzilla, which was then, inevitably, followed by that song. 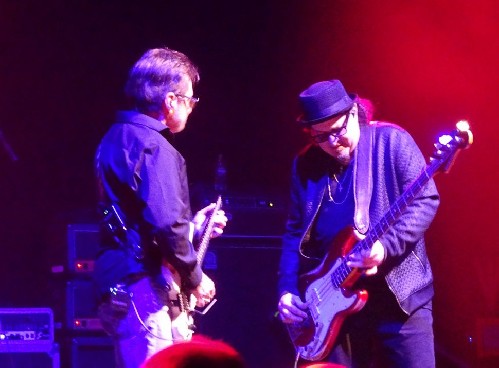 The promise of Don’t Fear the Reaper hung over the evening like – well like the Grim Reaper, I suppose – and it can’t be easy knowing how to deal with the top-heavy effect of a tune that outflanks everything else you’ve done, but BOC did the decent thing and closed the main set on the tune everyone was waiting for. A distinct lack of cowbell was a disappointment, but it was a fitting end to a nostalgic run through of classic rock tunes played with skill and affection. Back for an encore we got a further three oldies but goodies, during which the band seemed to go up a notch in intensity and momentum. City’s on Flame was probably the best performed song of the night, and an indicator of where they can get to if they ramp it up. Perhaps still finding their feet only a few hours off the plane, this was nonetheless a fitting closer to a fine old time by a fine old band They will assuredly only get better and better as the tour continues.